EV Corvette Racing to a Dealership Near You, Soon-ish

The upcoming hybrid and fully electric vehicles are rumored to have 1,000 horsepower.
Allison Bell for KSL Cars
June 13, 2022
Automotive News

General Motors is getting serious about producing an all-electric lineup by 2035. The queue already includes the Chevy Bolt, GMC Hummer pickup and Cadillac Lyriq crossover. The latest car in the GM family to get an electric makeover will be none other than the Chevrolet Corvette.

The company recently announced plans to release a hybrid Corvette, followed by a fully electric version. Though it will be some time before the EV Corvette hits the road, GM has already unveiled a glimpse of what’s to come.

GM President Mark Reuss announced that the hybrid version of the Corvette, rumored to be dubbed the Zora, would launch in 2023. Aside from the improved fuel economy, this version also appears to be all-wheel drive — a first for the standard rear-wheel-drive Corvette.

Buckle up for this one — the Corvette hybrid is also rumored to have 1,000 horsepower from a twin-turbo 5.5-liter V8 engine. For reference, the newly introduced 2023 Chevy Corvette Z06 offers 670 horsepower.

GM didn’t release any photos with the hybrid and EV announcement, but there is a video of a camouflaged prototype. The hybrid seems to have the same body as the gas-powered Corvette. Yellow brake calipers were the main visible difference.

GM Authority estimates the hybrid will start around $70,000, only slightly higher than the 2022 Corvette Stingray. Considering what you’ll end up saving on gas, the hybrid Corvette price seems reasonable.

Those eagerly anticipating the arrival of the fully electric vehicle will have to save their batteries for a while longer. The EV Corvette, or E-Ray as many believe it will be called, could be coming to a dealer near you in 2024. That is, if all goes according to plan. However, GM hasn’t officially set a release date as of this writing. 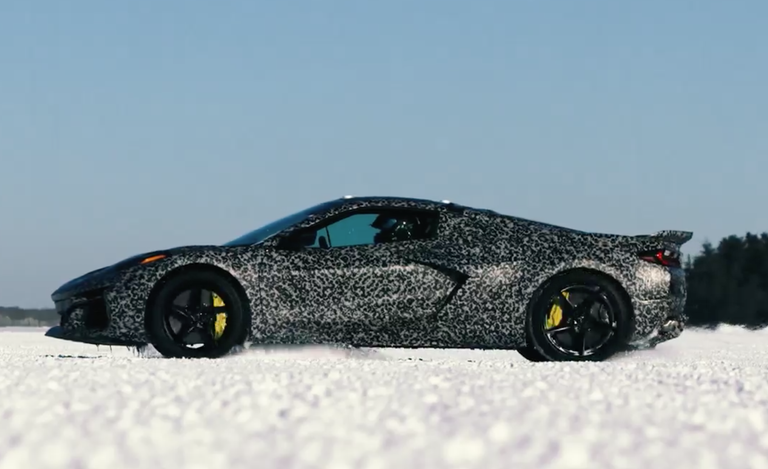 Much of the information surrounding the 2025 Chevy Corvette EV is speculation at this point, but it will definitely come with a higher price tag than its hybrid and gas-powered counterparts. Car and Driver predicts a price range between $100,000 and $120,000.

The EV will likely have three or four electric motors producing 1,000 horsepower, just like the hybrid. Similar to its other EVs, GM will use Ultium batteries for the EV Corvette. For official specs, everyone will have to stay tuned.

If you’re itching to get behind the wheel of an EV and can’t wait for the new Corvette, you’re in luck. There are more than 100 other Corvettes for sale on KSL Cars. Or shop for other electric vehicles and hybrids that you can drive home today.