Value-priced, economical and endless in its versatility, the Toyota Corolla Cross is poised to be a new favorite among compact SUV buyers.
Jason Bell
October 19, 2022
Car Review

While it bears little resemblance to the favorite sedan it's based on, the Corolla Cross takes Toyota’s compact SUV segment to another level. Offering a comfortable driving position, an array of driver assistance technology and the capability of hauling gear down some light trails, there’s a lot to love here for commuters and adventure seekers alike.

The Corolla Cross is brimming with value, especially in the upper LE and XLE trims. The MSRP range for the 2022 Toyota Corolla Cross is $22,445-$26,575. It is available in three trim levels, with a suite of standard features that includes collision avoidance with automatic braking, adaptive cruise control and road sign recognition. Some of the major differences in trim levels are noted below.

Audio with a 7-inch touchscreen and six speakers

Audio with an 8-inch touchscreen and six speakers

In a market where the average new car price is over $48,000, the Corolla Cross is a compelling value. Even the fully-loaded, all-wheel-drive XLE trim is an excellent purchase. Toyota’s warranty is on par with the industry average, with a 3-year/36,000-mile limited warranty and a 5-year/60,000-mile powertrain warranty. Toyota also throws in complimentary maintenance for two years or 25,000 miles.

All Corolla Cross models come with a 2.0-liter, naturally aspirated 4-cylinder engine that produces 169 horsepower and 150 pound-feet of torque. While not exactly zippy, the engine produces just enough power for highway merging and canyon climbing — although passing maneuvers might take some forethought. 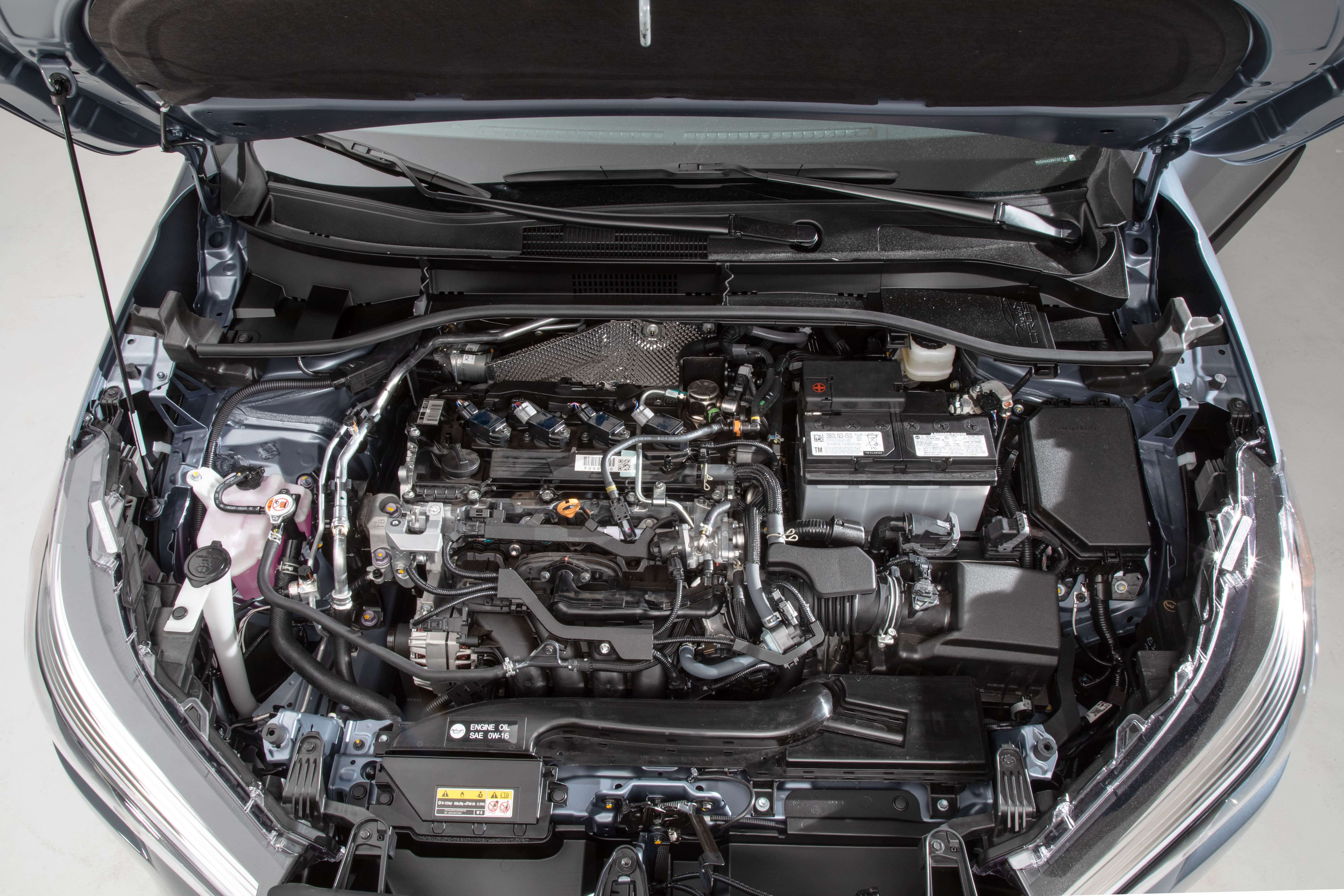 Keeping with its sedan roots, the Corolla Cross boasts excellent fuel economy, even in all-wheel drive. The Environmental Protection Agency rates the Corolla Cross XLE AWD as 29 mpg in the city and 32 mpg on the highway. We experienced just over 30 mpg in our week of daily driving and commuting, slightly better than the combined EPA rating.

All Corolla Cross SUVs are equipped with a continuously variable transmission. CVTs can be hit or miss, but Toyota’s does a nice job of translating power from the engine to the engaged wheels. The all-wheel-drive system is an added bonus and sure to provide reassurance for commuters and adventurers seeking extra grip when the roads get slick.

Accelerating in the Corolla Cross is … uneventful. The engine quickly runs out of steam in the upper rpm and gives off a buzzy feeling as it strains for power. In Car and Driver’s testing, the Corolla Cross needed 9.2 seconds to reach 60 mph. Handling, like its acceleration, is subdued. The leather-wrapped steering wheel feels nice in your hands, but responsiveness is easygoing at best — not necessarily a bad thing for everyday commuting. 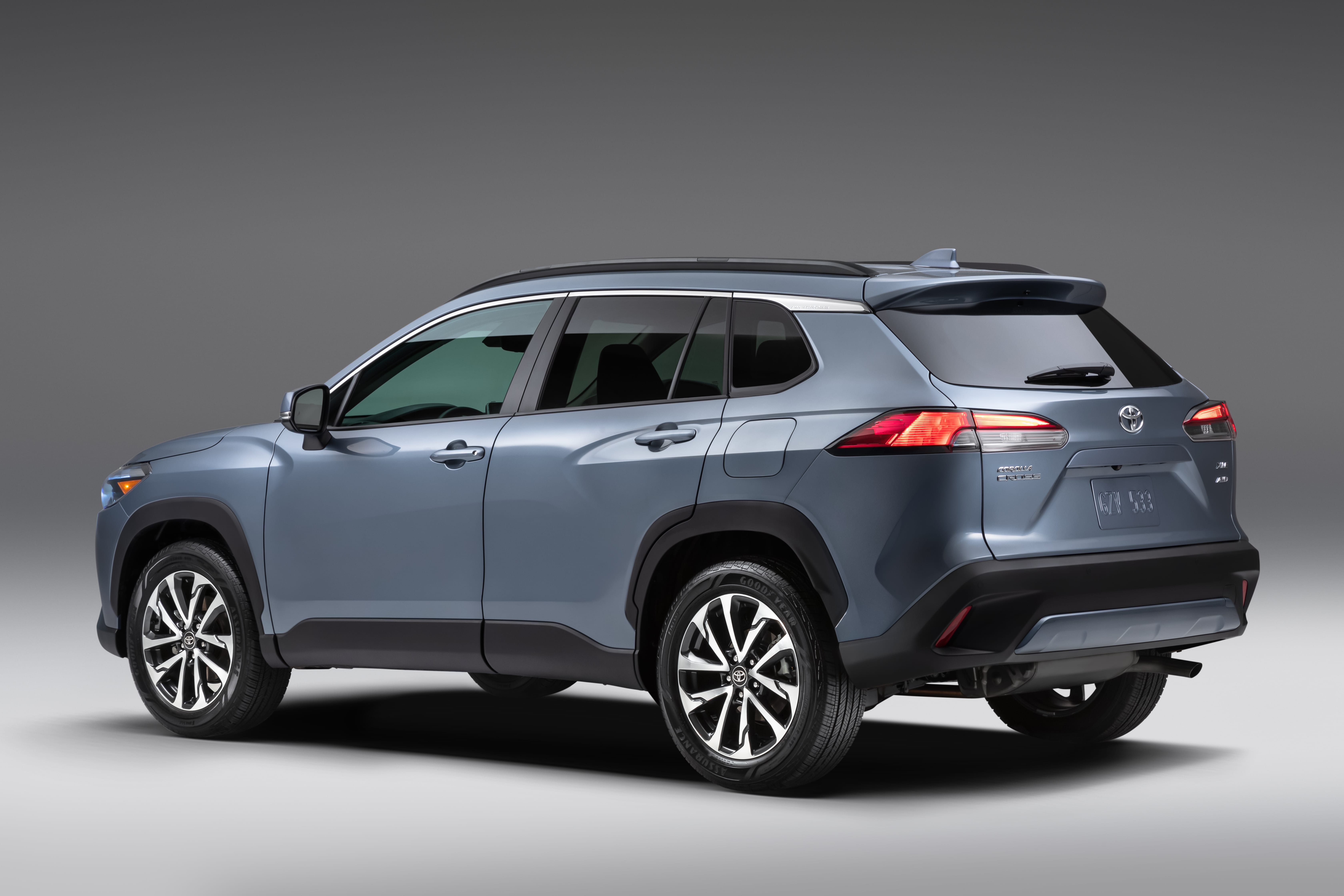 Adding to its laid-back demeanor, braking is perfectly adequate. The brakes felt easy to modulate and stopped without hesitation or too much effort. In addition to Toyota’s Safety Sense suite — included on all Corolla Cross trims — our tester had pre-collision and pedestrian detection, as well as rear cross traffic alert and braking assist.

Buyers familiar with the Corolla sedan will appreciate the interior design that’s been carried over to the Cross. It’s simple, logical, easy to use and comfortable. The increased dimensions of the Corolla Cross mean greater rear seat passenger and cargo space. The XLE trim dresses things up nicely with SofTex seating surfaces, a leather wrapped shift knob, a back-seat center armrest, interactive infotainment display and heated seats. For only a few thousand dollars more than the base trim, we think the XLE is well worth it.

The front seats are comfortable for all body types, with near-perfect seating position and supportive cushions. They’re soft and welcoming for commuting, running errands, road trips and more. The SofTex material looks nice and cleans easily — a relief for parents everywhere. The material gets hot, however, and doesn’t breathe well. We longed for perforation during the hot summer days of our testing. The rear seats are also comfortable and roomier than expected. While people over six feet tall might find their legroom cramped, all other passengers should find it more than adequate for basic transportation. The rear seat passengers are also treated to rear HVAC vents, which do a great job keeping the cabin cool. 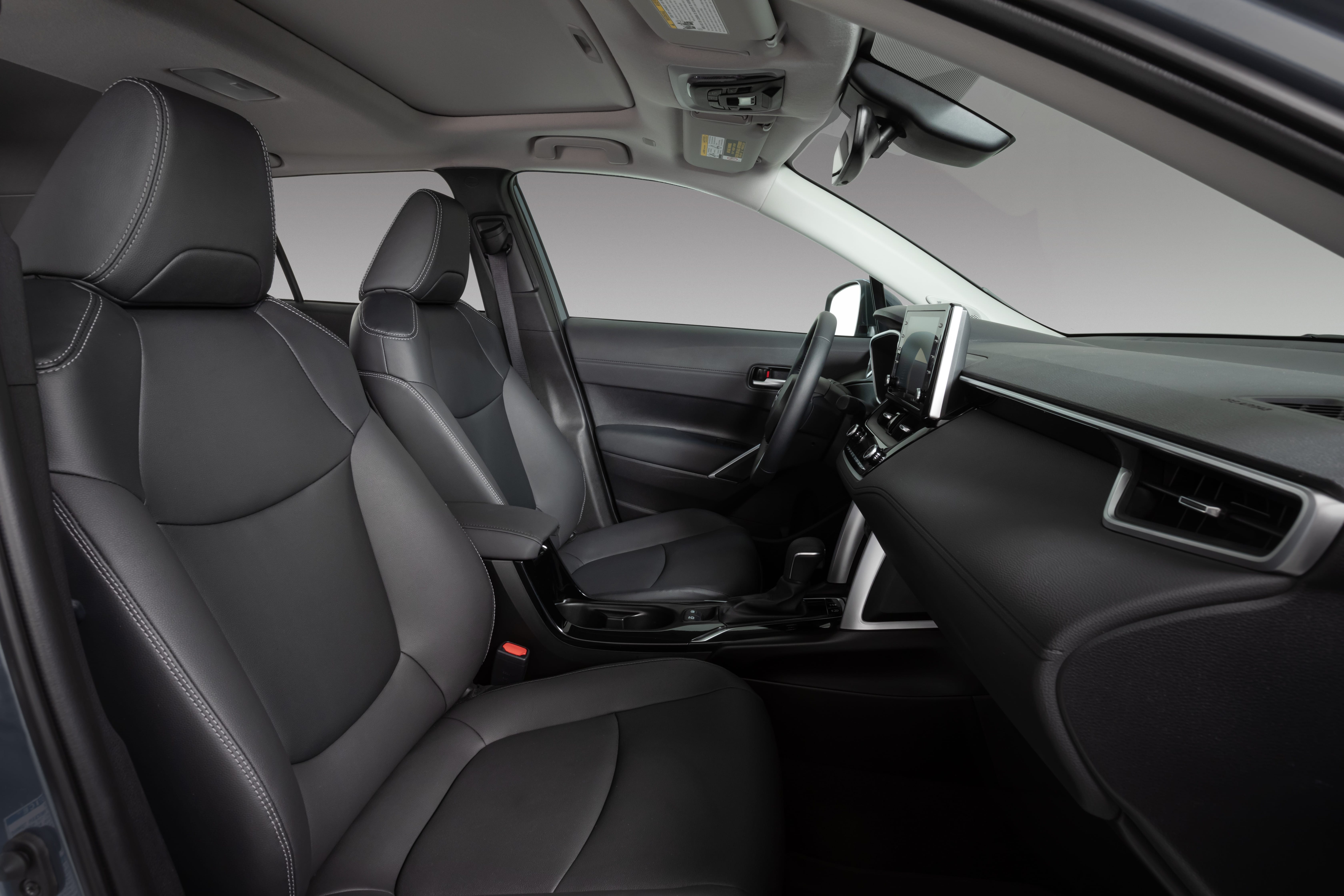 As with other features in the cabin, the Corolla Cross’s climate controls are simple and easy to use. Dual-zone climate control is standard in the XLE trim and the HVAC system cooled the cabin in a respectable amount of time.

The Corolla Cross has a surprising amount of cargo and cabin storage, especially given its compact dimensions. Behind the second row, there is 25.2 cubic feet of cargo space. With the second row folded flat, there is 65.5 cubic feet — plenty for hauling groceries, soccer gear, adventure gear and even a bike or two. The Corolla Cross also has a few smaller nooks for storage, and the center armrest is large enough for pocket items. Our tester was equipped with a wireless charging pad, and it worked pretty well with our Apple iPhone. 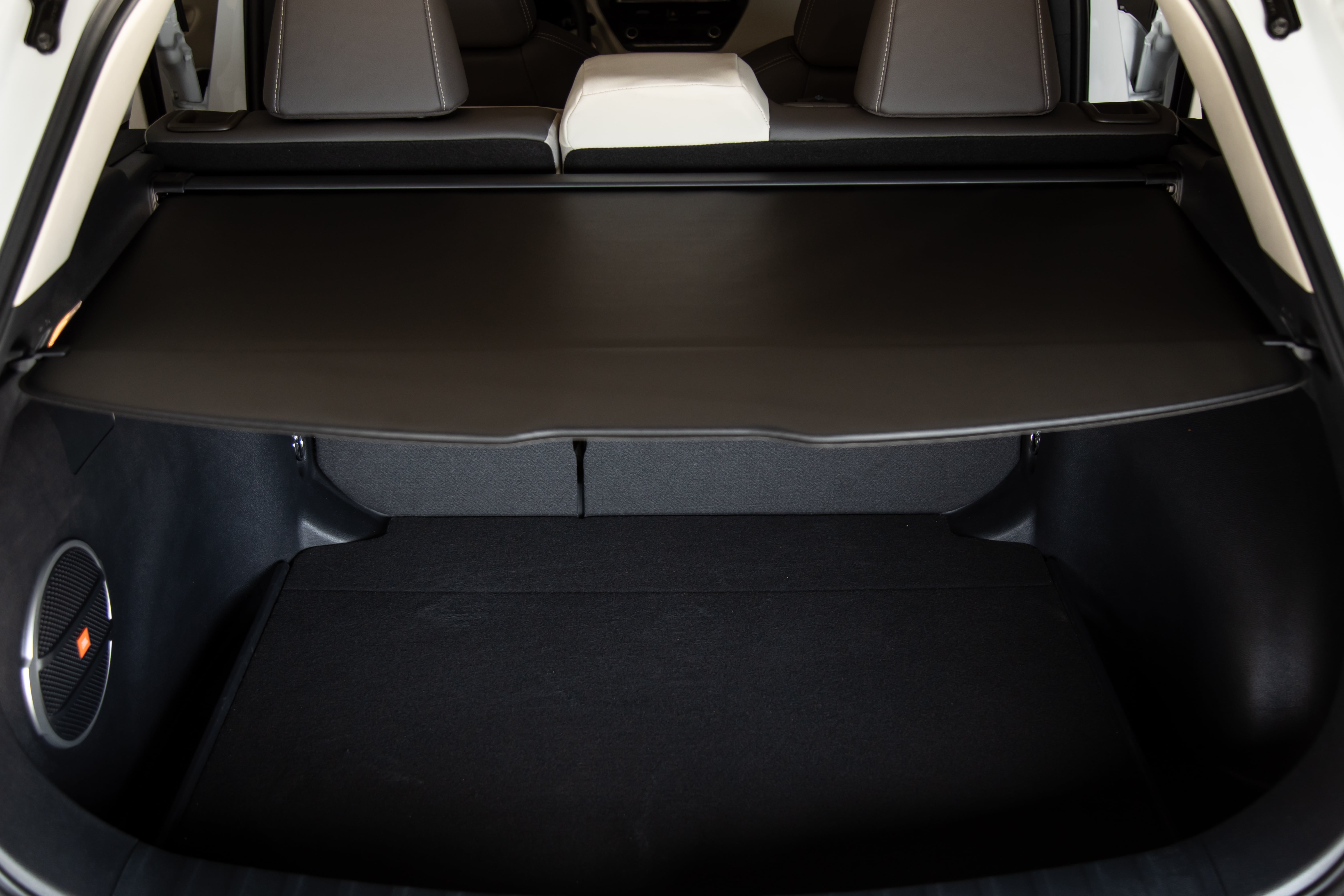 Sprouting proudly from the dash stands Toyota’s familiar 8-inch touchscreen infotainment display. It’s simple in its layout and easy to use with your smartphone via Apple CarPlay and Android Auto. Our tester’s optional nine-speaker JBL stereo sounded great, with deep bass coming through nicely thanks to the included subwoofer and amplifier. 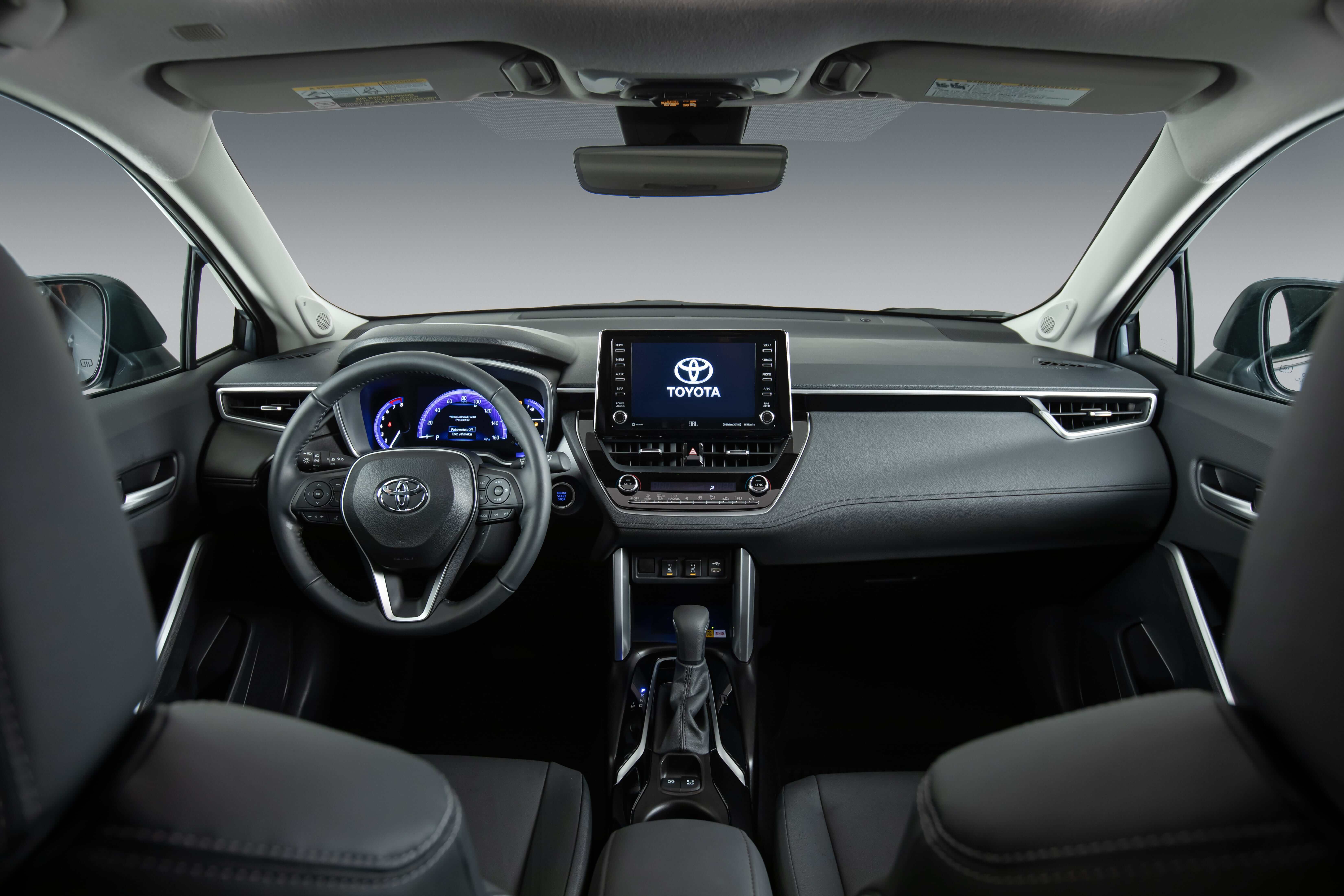 While some might question the need for another compact SUV in Toyota’s lineup, the Corolla Cross makes a statement for itself with composed and attractive styling. It looks nothing like its namesake sedan, instead communicating a mature yet slightly athletic demeanor. The Corolla Cross is small, but its styling is all the better for it. It comes in eye-catching colors, including our tester’s Celestite (a slate blue), Cypress, Blue Crush Metallic and Barcelona Red Metallic.

The Toyota Corolla Cross can tow up to 1,500 pounds, but that doesn’t mean that you should take advantage of that rating. Given its low power output, you may be best served to leave the towing to other, more capable vehicles. Payload capacity is capped at 1,175 pounds.

Our XLE tester was fitted with handsome 18-inch aluminum wheels shod with 225/55R-18 Goodyear Assurance all-season tires. Traction from the tires was good, as was the ride quality. Road noise was louder than expected, but not loud enough that it was irritating on highway drives. 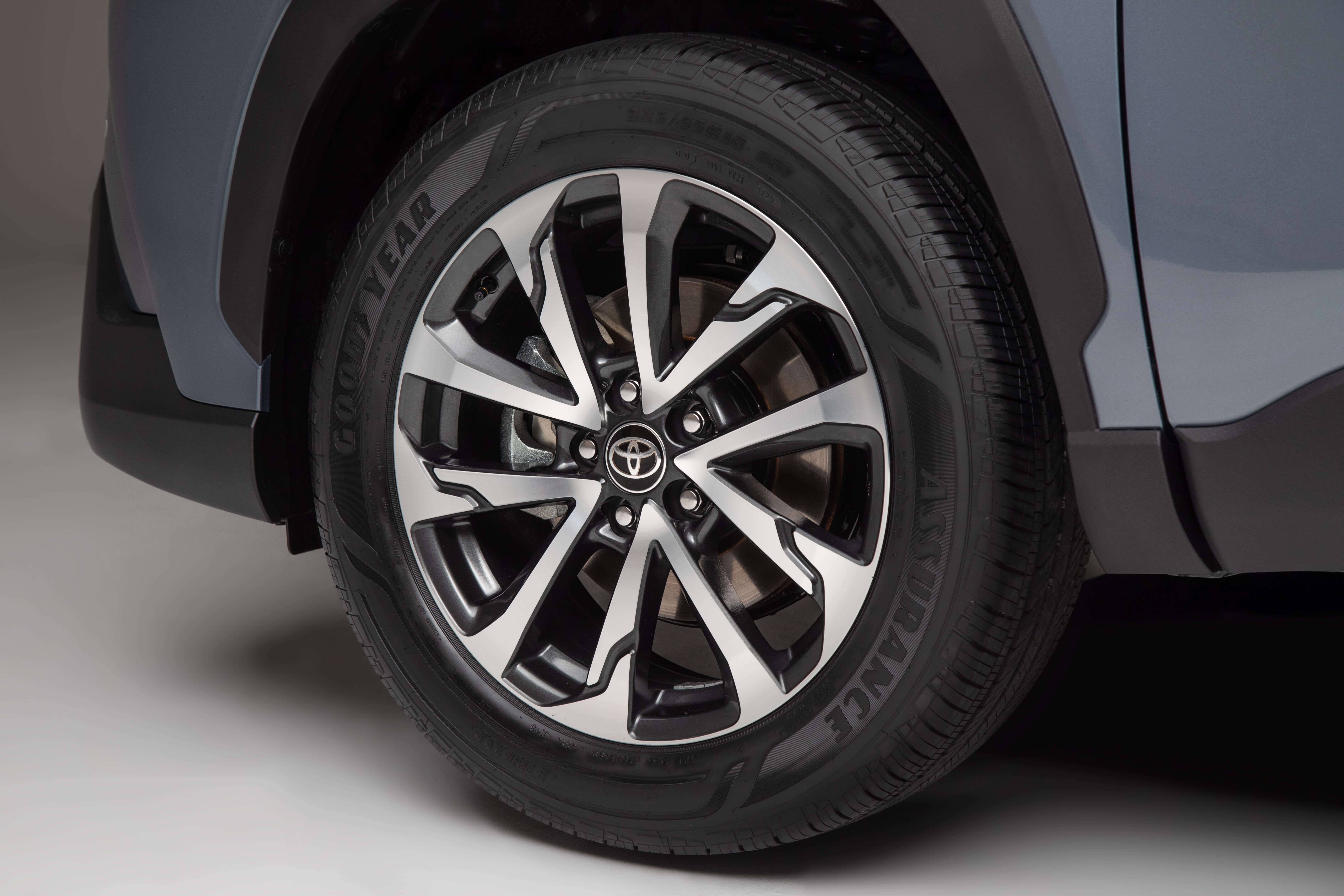 Toyota’s gone all-out for the Corolla Cross lighting system. LED headlights, fog lights and taillights are standard, and all provide a good amount of light. Our tester was equipped with an optional adaptive and auto-leveling front headlight system, which seemed worth the money. 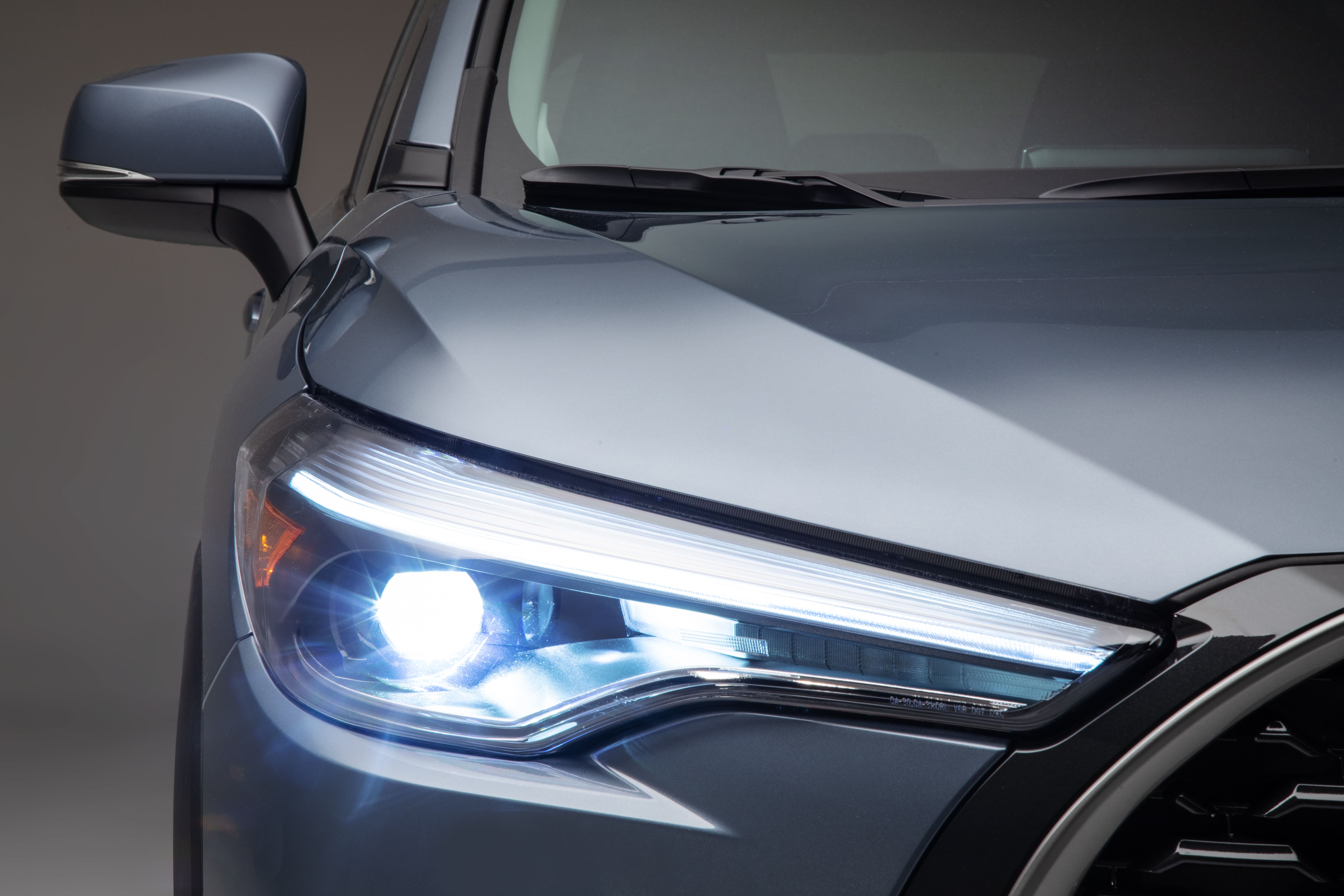 The Corolla Cross is only equipped with a backup camera, but that’s OK. The backup sensors help detect objects that would otherwise be seen with a 360-degree camera. The side mirrors provide clear views down the sides of the vehicle, and the integrated turn signal indicators are easily seen by other drivers.

Visibility from the front windshield is excellent, as is the view out the large side windows. The Corolla Cross is equipped with standard defrost features, which we’re sure work well when the weather is cold.

Adding to the practicality of the Corolla Cross, its safety and crash test ratings are second to none. With a myriad of safety features standard, the Corolla Cross is an excellent choice for those placing safety as the priority.

Every Corolla Cross comes with Toyota’s Safety Sense suite of features, including:

When it comes to safety awards and ratings, the Cross is no slouch. The 2022 Toyota Corolla Cross was awarded the Top Safety Pick+ by the Insurance Institute for Highway Safety, its highest award. It had not been tested by the National Highway Traffic Safety Administration as of this writing, but we expect it to fare well given its top rankings by the IIHS. 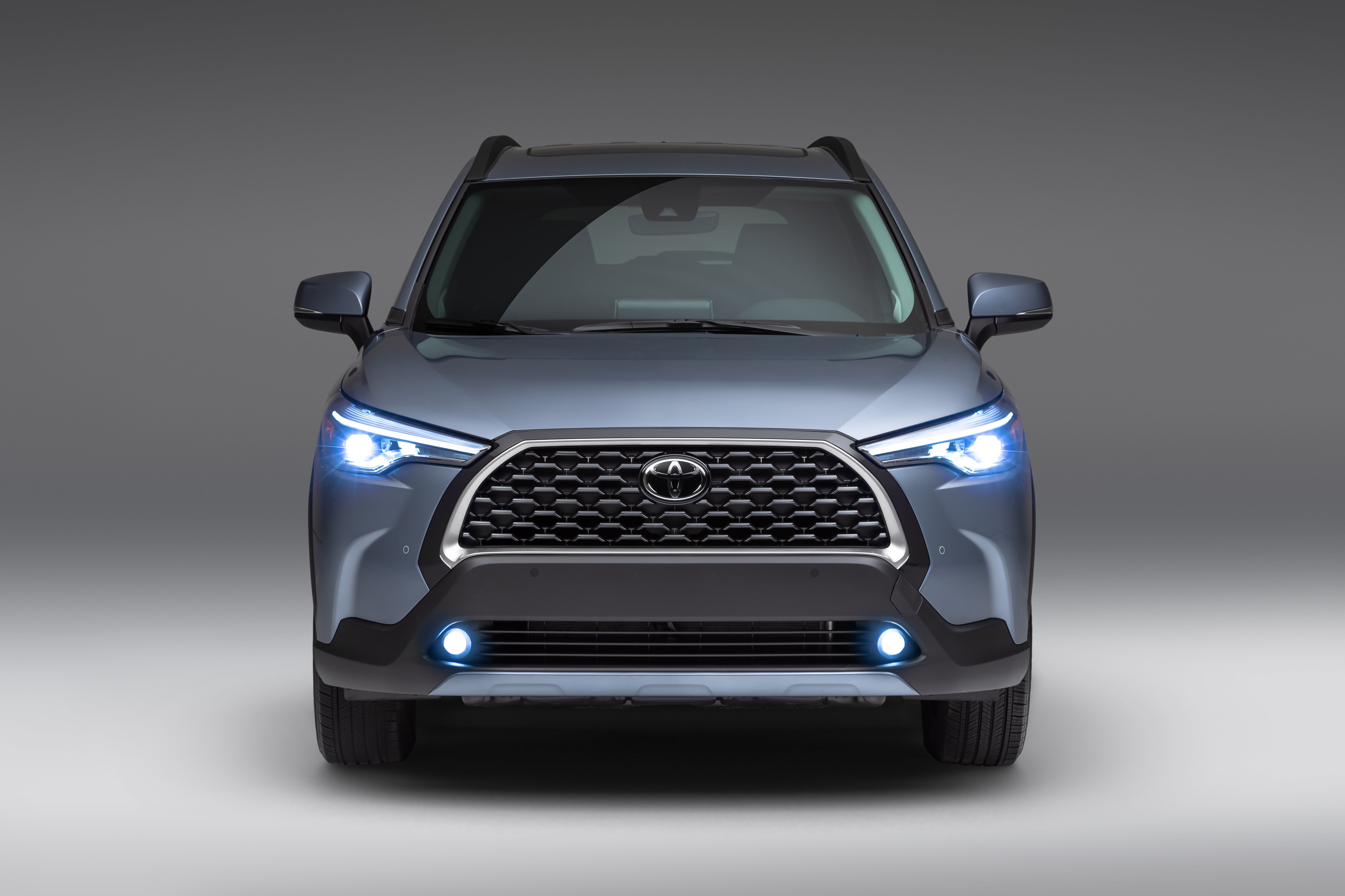 To earn the goodwill of loyal Corolla fans, Toyota knew it would need to create an SUV worthy of its storied nameplate — they’ve succeeded. For casual adventurers and everyday drivers alike, the Toyota Corolla Cross offers a strong combination of value, technology, safety, fuel economy and practicality. While its driving dynamics will leave some wanting, most buyers will find the Corolla Cross to be a charmer in almost every aspect.

The XLE trim proved to be worth the extra money over the L and LE trims, mainly for its dressed-up interior and upgraded technology. It’s the trim we recommend.

Is the Corolla Cross fun to drive?

The Corolla Cross isn’t the most exciting vehicle in the Toyota lineup, but it more than makes up for that in its practicality. It’s simple, straightforward and an all-around good commuter for the casual adventure seeker.

Is the Corolla Cross good for families?

Yes and no. While there is ample cargo space for all the standard family schlepping gear, middle row passengers could find themselves cramped if the front passengers are taller than 5 feet, 9 inches. This could be especially true if infant or child seats are installed. So while it’s not necessarily a bad choice for small families, it also might be something that is quickly outgrown.