Route 66 Road Trip Is a Step Back in Time

While seated in downtown Kingman, Arizona, having dinner along the streetside, a DMC DeLorean drove past. “Oh, check that out,” said my travel partner, pointing to the car whizzing by. The symbolism stuck with me because, just hours before, I had mused that it felt like we had taken a “Back to the Future” time machine that day. We’d been living in the 1800s while visiting Oatman, an old mining boomtown.

The Route 66 Mother Road — or at least, what’s left of it — has beckoned to road trippers for nearly 60 years. We are lucky to have a strong Route 66 culture just south of Utah’s southern border. 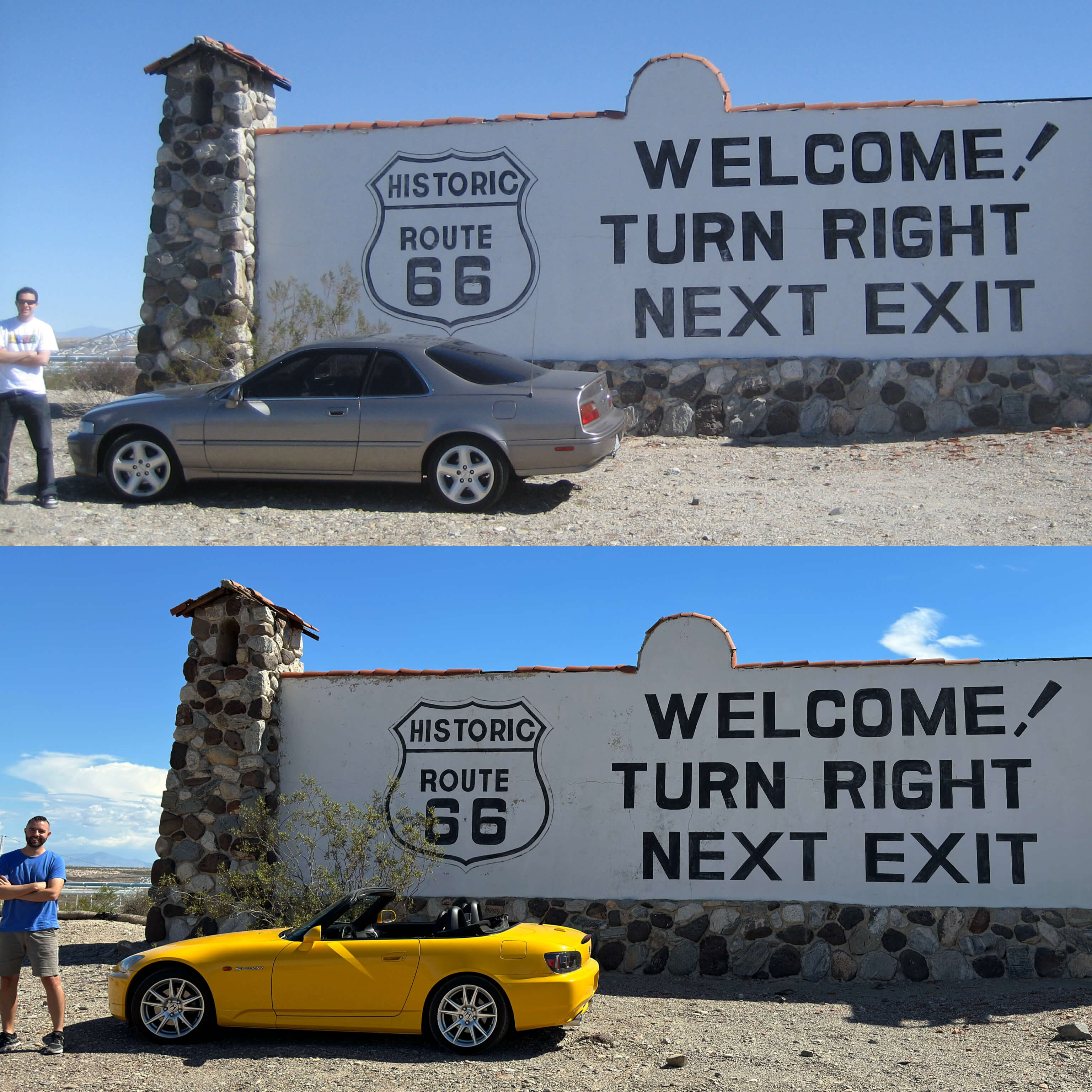 My friend Jason and I decided to saddle up in our cars and take a weekend adventure to resurrect old memories and make new ones. Our Route 66 road trip — a clockwise loop that started and ended in central Phoenix — came in at just about 485 miles and 8.5 hours of drive time, split over two days. I was excited to visit Oatman, since I hadn’t been there since 2007. I’m happy to report (and perhaps, not surprisingly), it looked about the same.

What was once a 2,448-mile artery between Chicago and Santa Monica, California, has mostly been overtaken or bypassed by larger, more efficient interstate highways. A few surviving stretches of the road offer a glimpse into the past. Many of the buildings and bridges along the way — over 200, in fact — have earned a place on historical registries. Art deco architecture is common in many of the smaller towns. 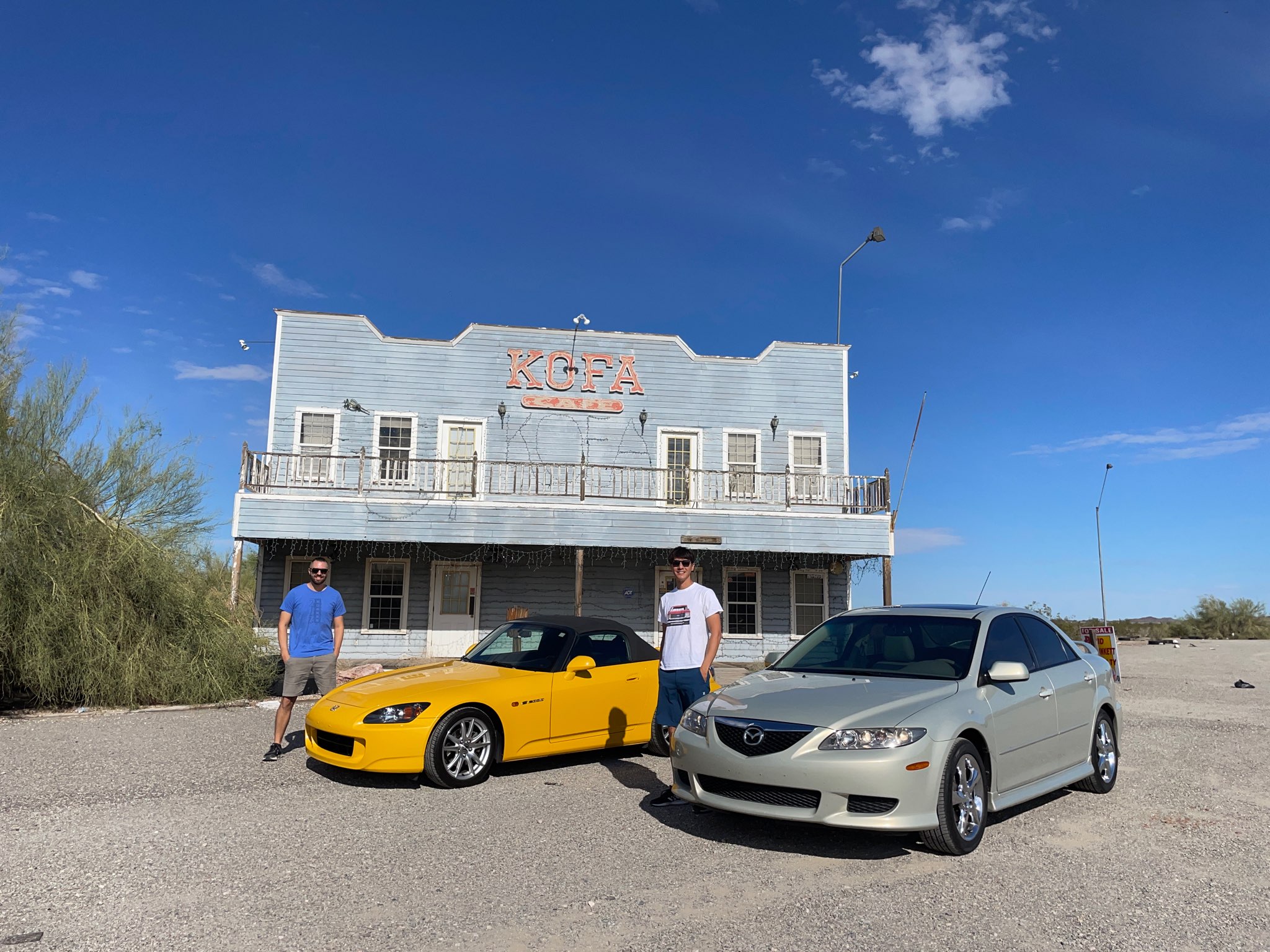 Route 66 got its start in late 1926, but it was not completely paved until 1938. The ensuing decades brought occasional changes to the alignments in the interest of safety and efficiency.

The route was officially removed from the National Highway System in 1985. Some of its stretches remain in service as business loops for the interstates, while others were abandoned completely. Today, it’s impossible to drive uninterrupted for the entire stretch, but Arizona offers a few original tracts.

In Arizona, Route 66 originally covered 401 miles across the northern part of the state, running east and west. One town that remains on the map — despite being bypassed by Interstate 40 in 1953 — is Oatman. In the 1960s, Oatman was almost entirely abandoned. But since the late 1980s it has been revitalized, to some extent thanks to Route 66 tourism. 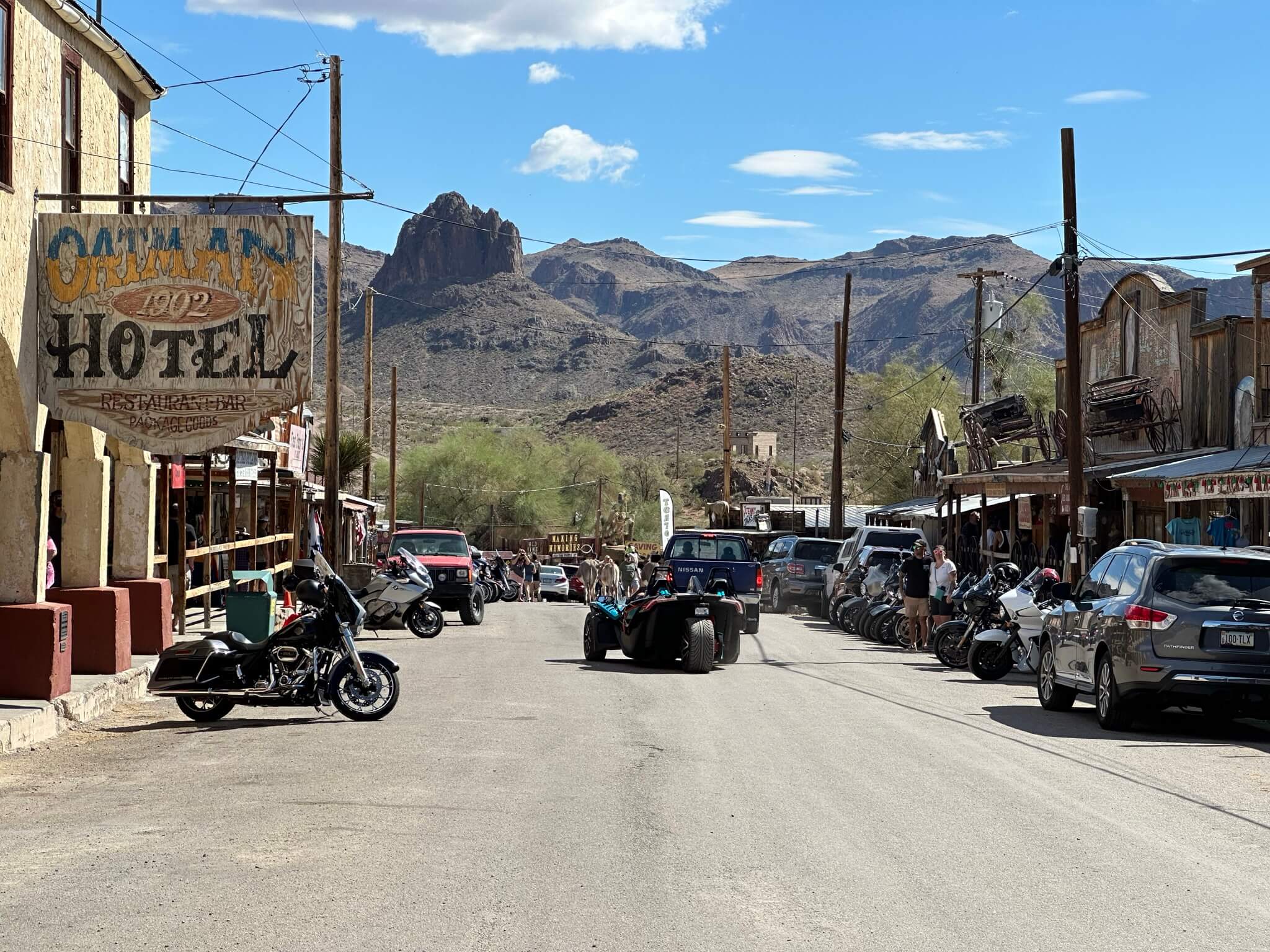 We paused briefly for fuel in Needles, California, then began working our way toward this quaint destination. The road looks and feels old, with little attempt to modernize it with wide shoulders, bike lanes or crisp striping like we are used to seeing. That’s part of the allure.

Oatman is nestled in the Black Mountains of northwestern Arizona. It was settled in the 1860s when gold was discovered there, and grew into a boomtown between 1915 and 1917. Many of Oatman’s buildings succumbed to a fire in 1921, but the original 1902 hotel remains — although now it’s a restaurant and museum. 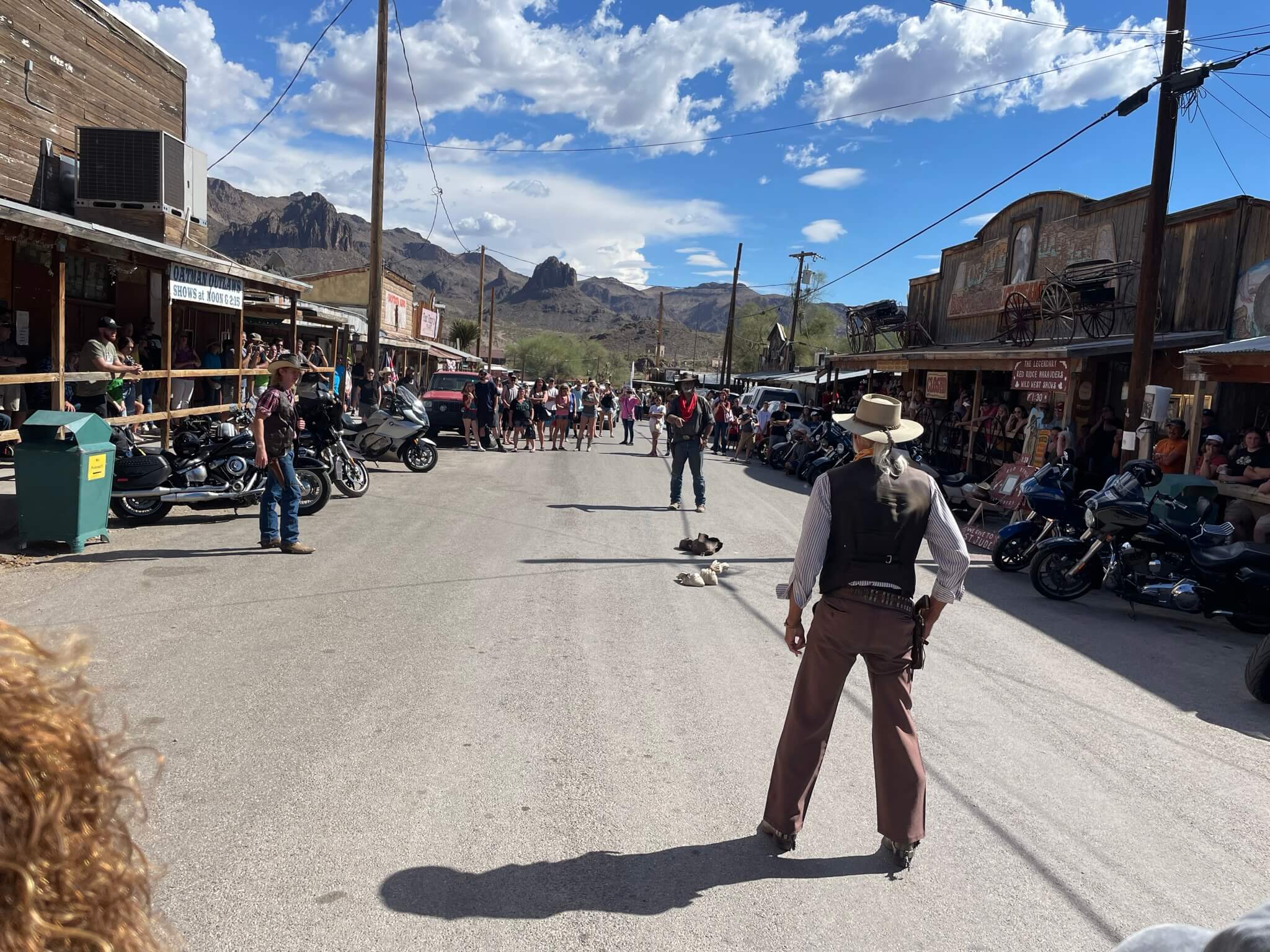 The primary mine closed in 1924, so for roughly 100 years the town has survived largely on tourism. The atmosphere feels like a step back in time, with its wooden sidewalks and Wild West gunfight reenactments. We arrived just in time to see one such gunfight, staged around a bank robbery, which drew a crowd along the main street.

Some of Oatman’s most famous residents are the wild burros roaming the streets. We said hello to a few, including Big Mama, who was particularly friendly while taking treats from people on the streetside. Jason and I each ordered a buffalo burger from the hotel restaurant and gave it two thumbs up. 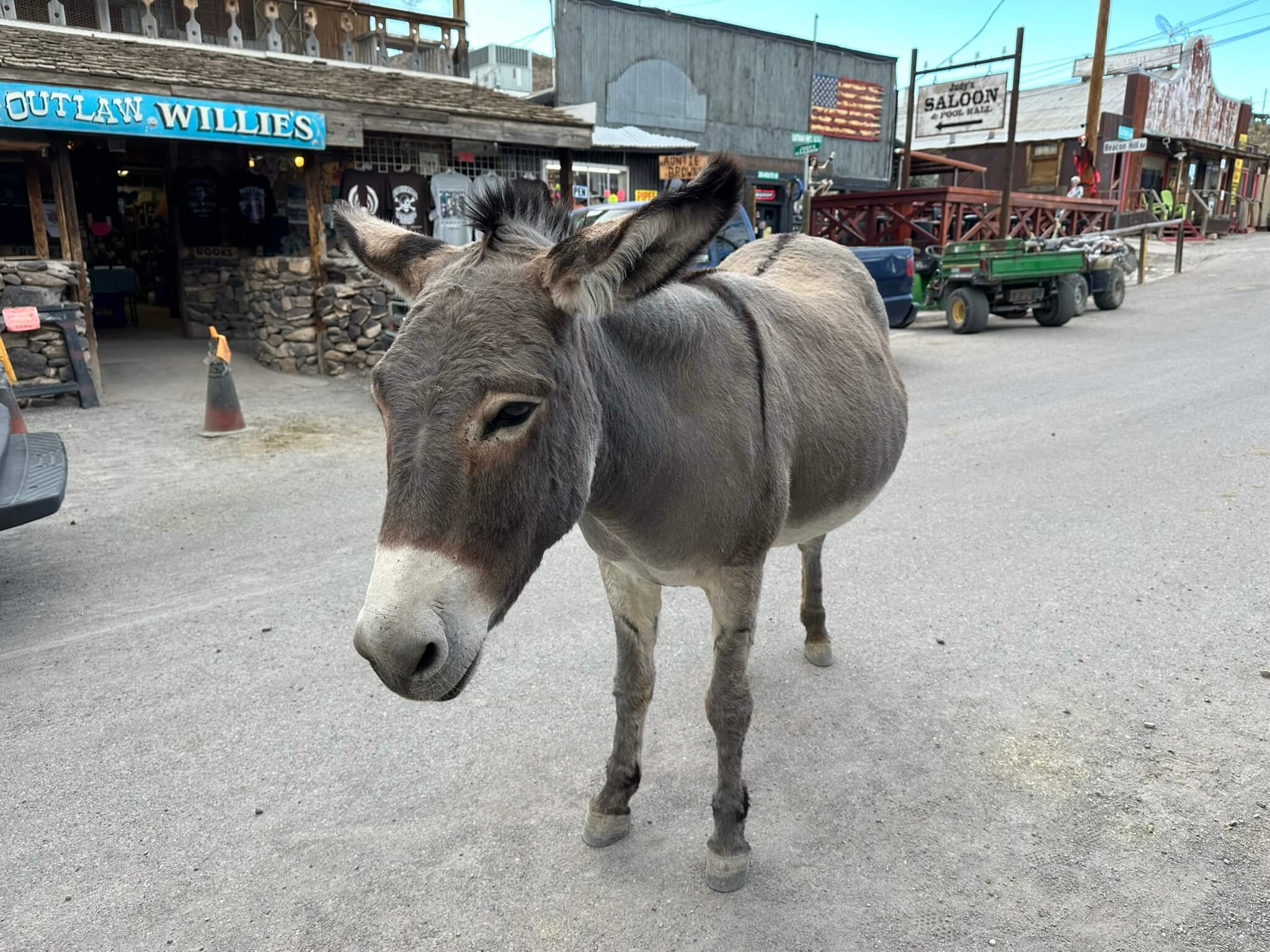 Our Arizona road trip next took us northwest toward Kingman. The road leading in that direction was once regarded as one of the most dangerous on Route 66 because of its narrow width, steep grades, hairpin curves and lack of guardrails. Sitgreaves Pass, at 3,550 feet, reportedly used to have a service where cars could be towed to the summit if they couldn’t make it on their own. Our 2004 Mazda and 2004 Honda didn’t seem to have any problems, and we took advantage of the panorama to snag a few photos before continuing on our way. 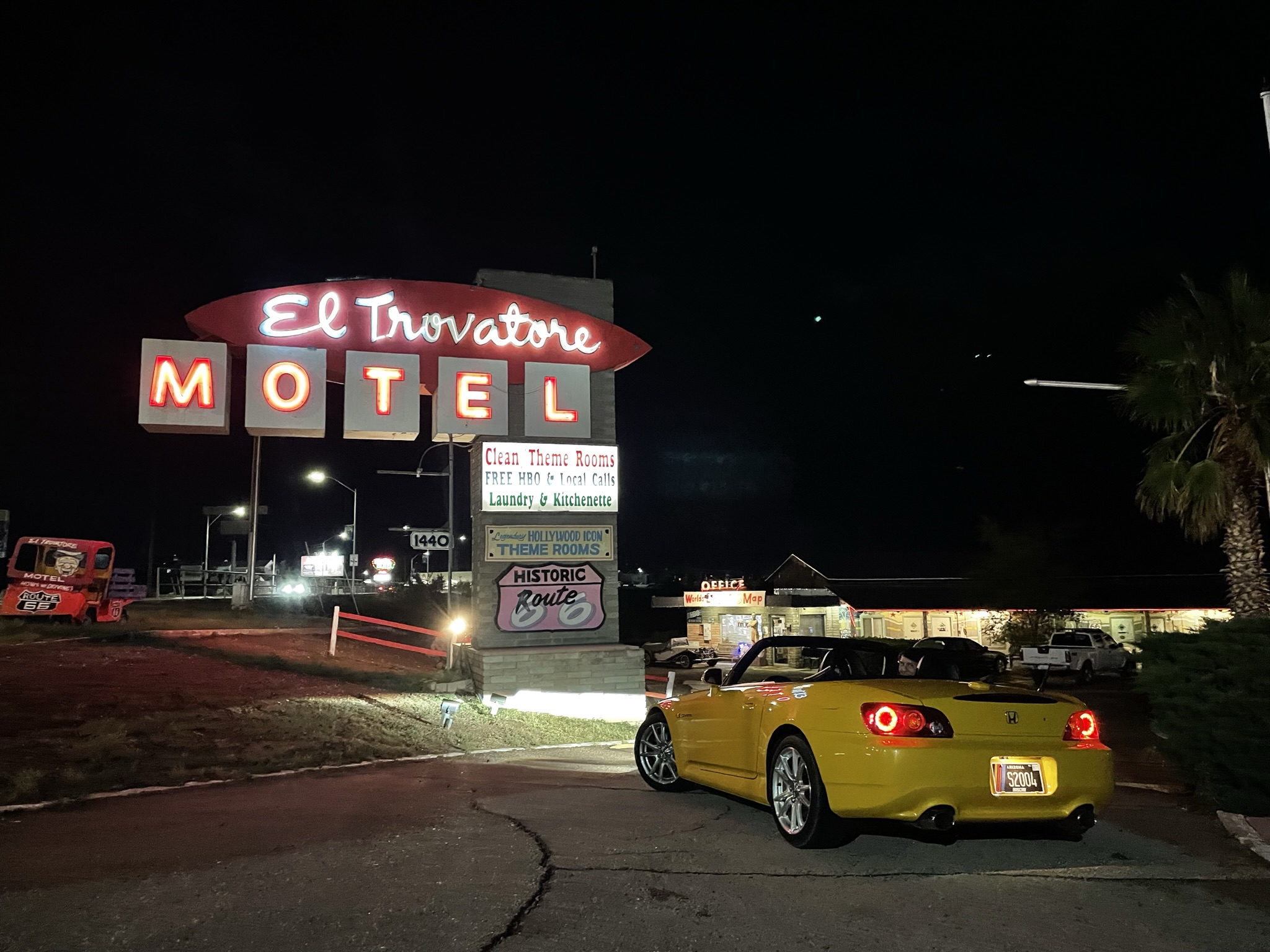 The original main thoroughfare in Kingman, now called Andy Devine Avenue, is home to a variety of motels and other buildings that retain retro Route 66 aesthetics. One of those motels was our resting place for the night, El Trovatore. This motel and its neon sign boast the “World’s Longest Route 66 Map,” which is, in fact, a mural painted across the face of the buildings. 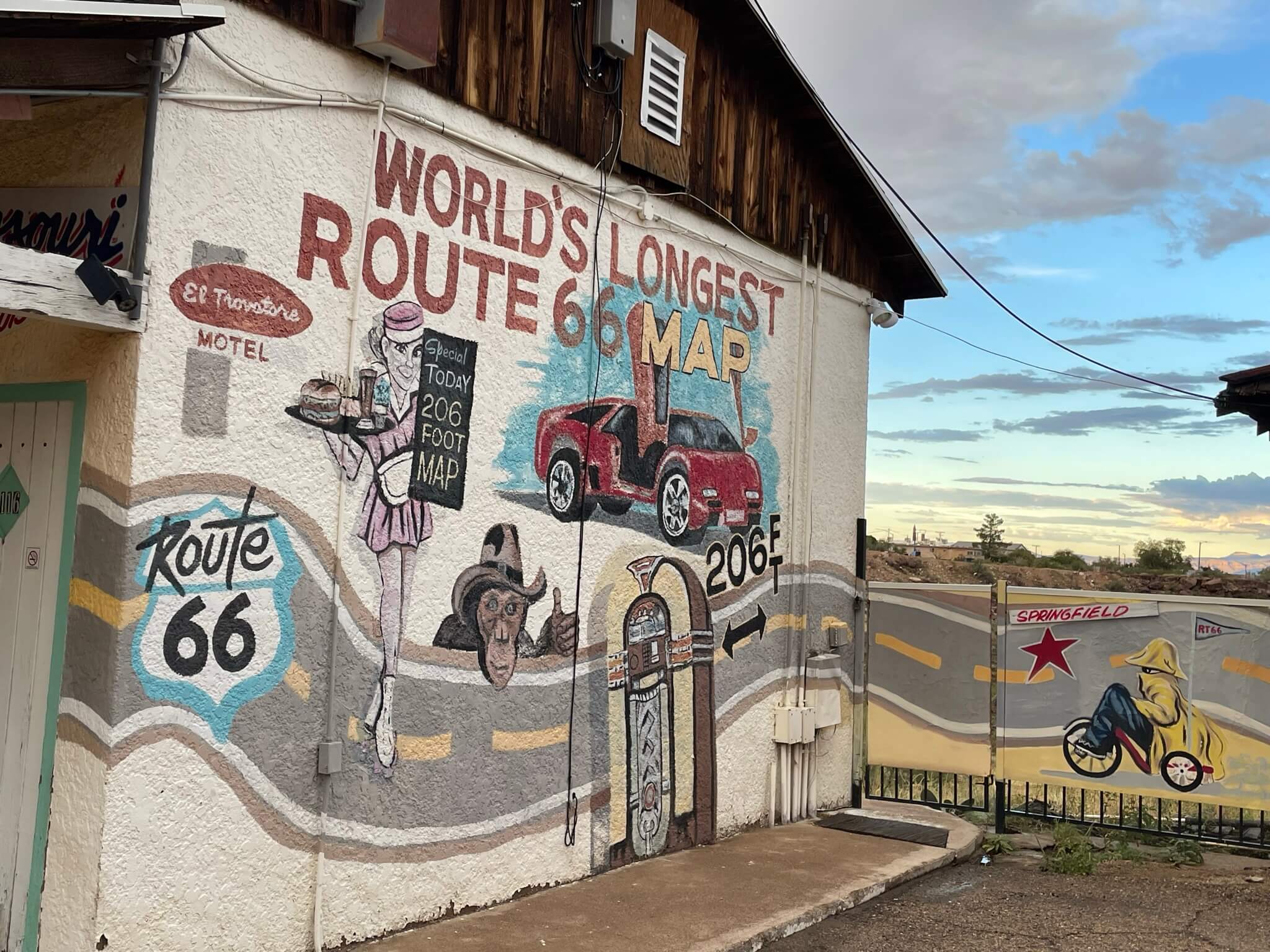 Sam, the owner, greeted us at the front desk and proceeded to tell the tale of Kingman and its history. His knowledge was vast and his humor was evident. He wouldn’t give me the key to my room until I could tell him how to say the word “key” in any language other than English. Luckily, I remembered a few things from middle school Spanish class! Our room was decorated with photos of Marilyn Monroe and provided a cozy place for the night.

Afternoon rainstorms left a fresh scent and a cool breeze in the evening air, so we put the top down on my S2000 and made our way to dinner in the historic business district. The wood-fired pizza hit the spot, and the DeLorean sighting was the perfect capstone to a daytrip that took us back in time. If only we could have had lunch with Marty McFly and Doc Brown, the day would have been perfect. 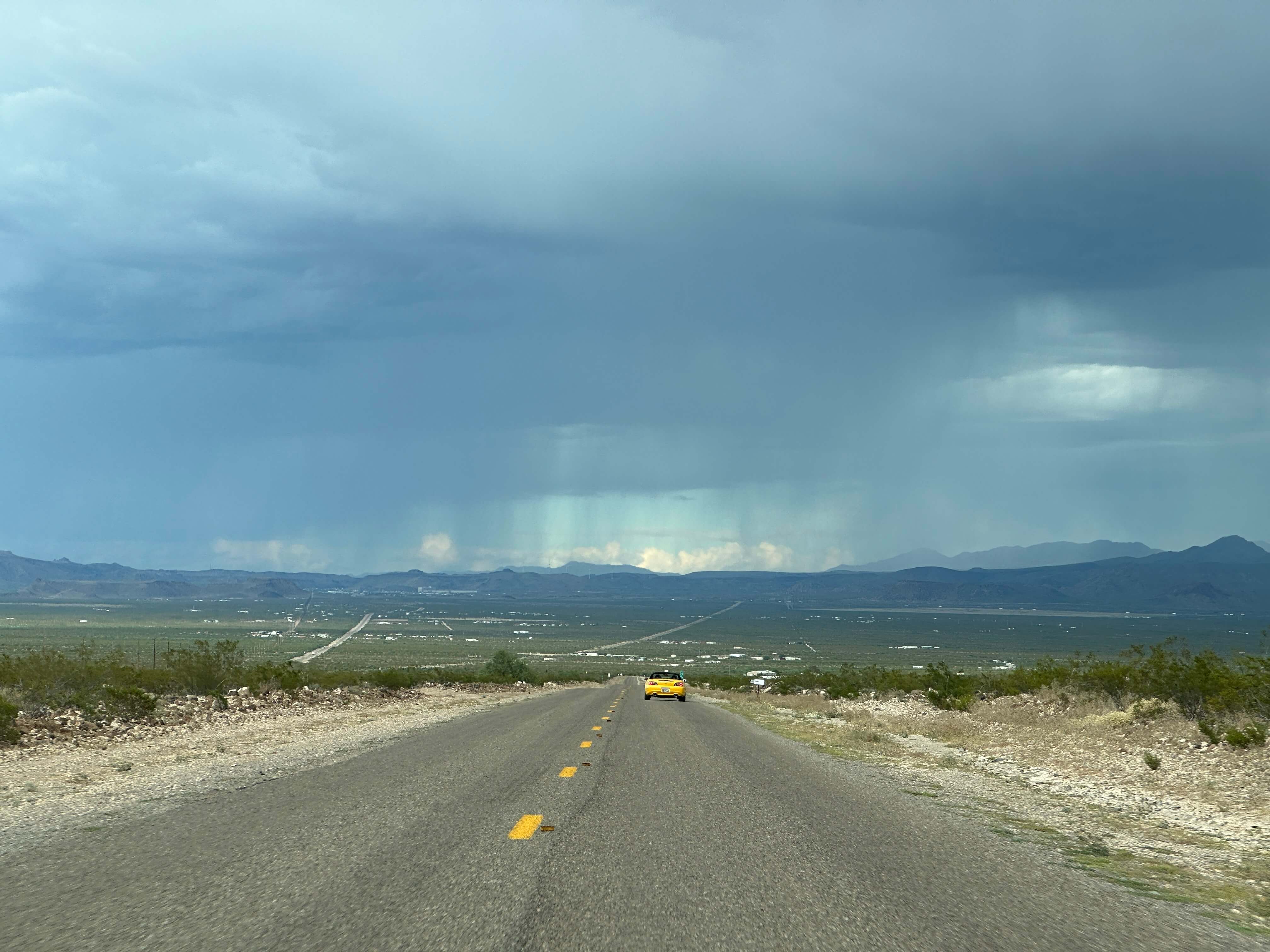 Ready to take on your next road trip adventure? Check out KSL Cars and browse the listings for your next ride.