With 700 horsepower and 37-inch wheels, the super truck is a beast.
Allison Bell
August 8, 2022
Automotive News

Faster, stronger and more powerful than its predecessors, the new 2023 Ford F-150 Raptor R is ramping up its off-road game in a big way. Will the changes to the award-winning super truck be enough to take out the Raptor’s similarly named competition?

Ford Performance Chief Engineer Carl Widmann thinks so. He touts it as thrilling enough to make your neck hair stand on end. With a more powerful engine, performance upgrades, distinct design features and a six-figure price tag, here’s everything you need to know about the Raptor R before you sink your teeth into it.

Get ready for a roar that rivals the fiercest dinosaur in “Jurassic Park.” The regular Raptor features a 3.5-liter V6 that makes 450 horsepower and 510 pound-feet of torque. Ford takes things to the next level with the Raptor R by giving it a substantial engine upgrade. It now comes with the supercharged 5.2-liter V8 engine from the Mustang Shelby GT500 — fittingly known as the Predator. The end result is a beefy pickup that makes 700 horsepower and 640 pound-feet of torque. Hold onto your … Well, you get the idea. 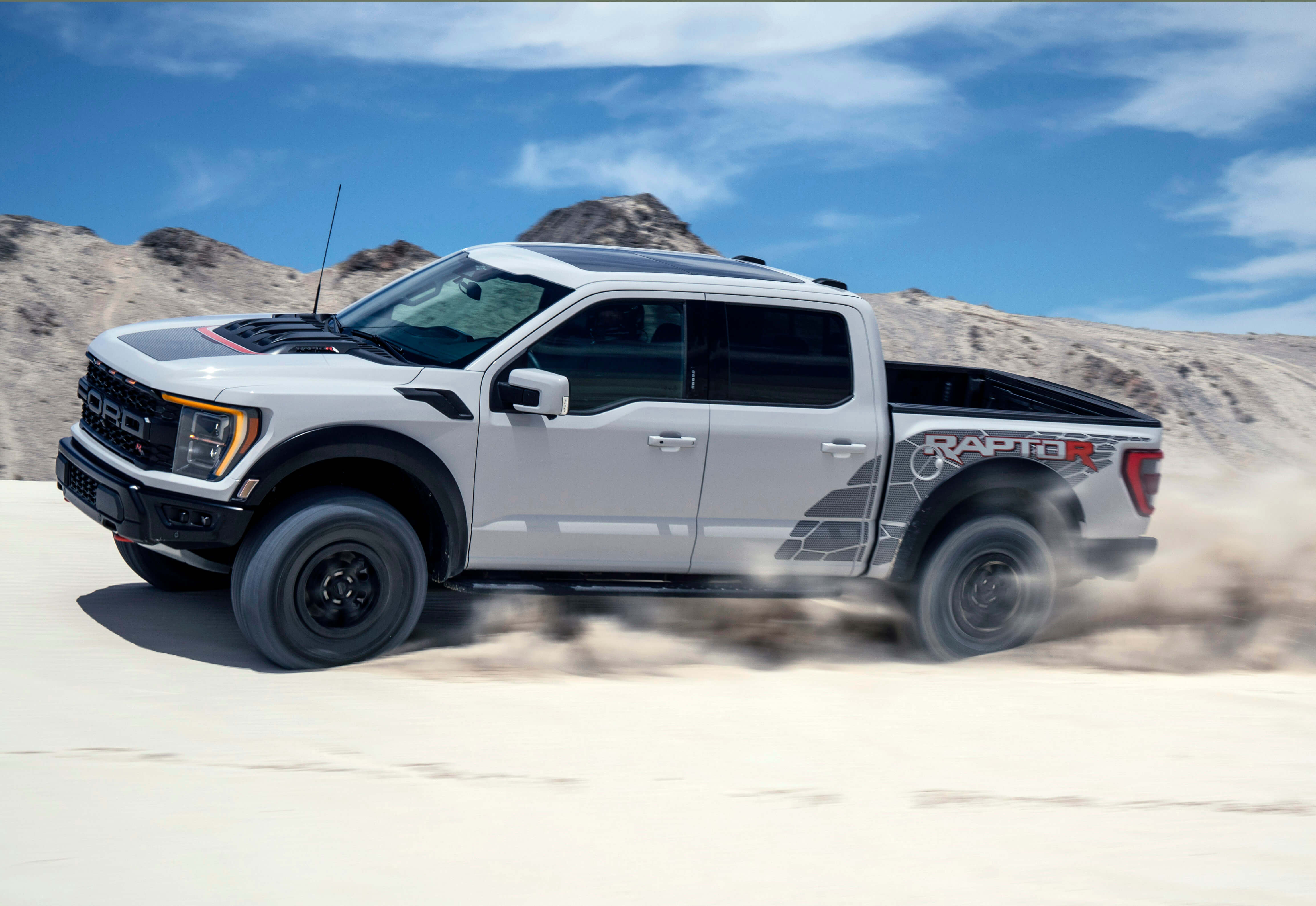 Ford made a few changes to the Raptor R to optimize performance. It still comes with a 10-speed automatic transmission and all-wheel drive, but the transmission has been recalibrated and includes an upgraded torque converter. The exhaust manifolds are made of cast stainless steel. Ford added a new oil cooler and filter, with a deeper oil pan to keep the engine cool while you traverse steep grades. The Raptor R also takes in 66% more air due to a wider intake and more efficient filter.

The high-performance pickup’s namesake is characterized by large hind feet claws that can do some serious damage to unsuspecting theme park goers. Much like the prehistoric carnivore, the 2023 Ford F-150 Raptor R carries its own set of formidable claws — 37-inch BFGoodrich all-terrain tires. These are the same one you’ll find on the regular V6 Raptor, except Ford made some minor tweaks to handle the heavier V8 engine. 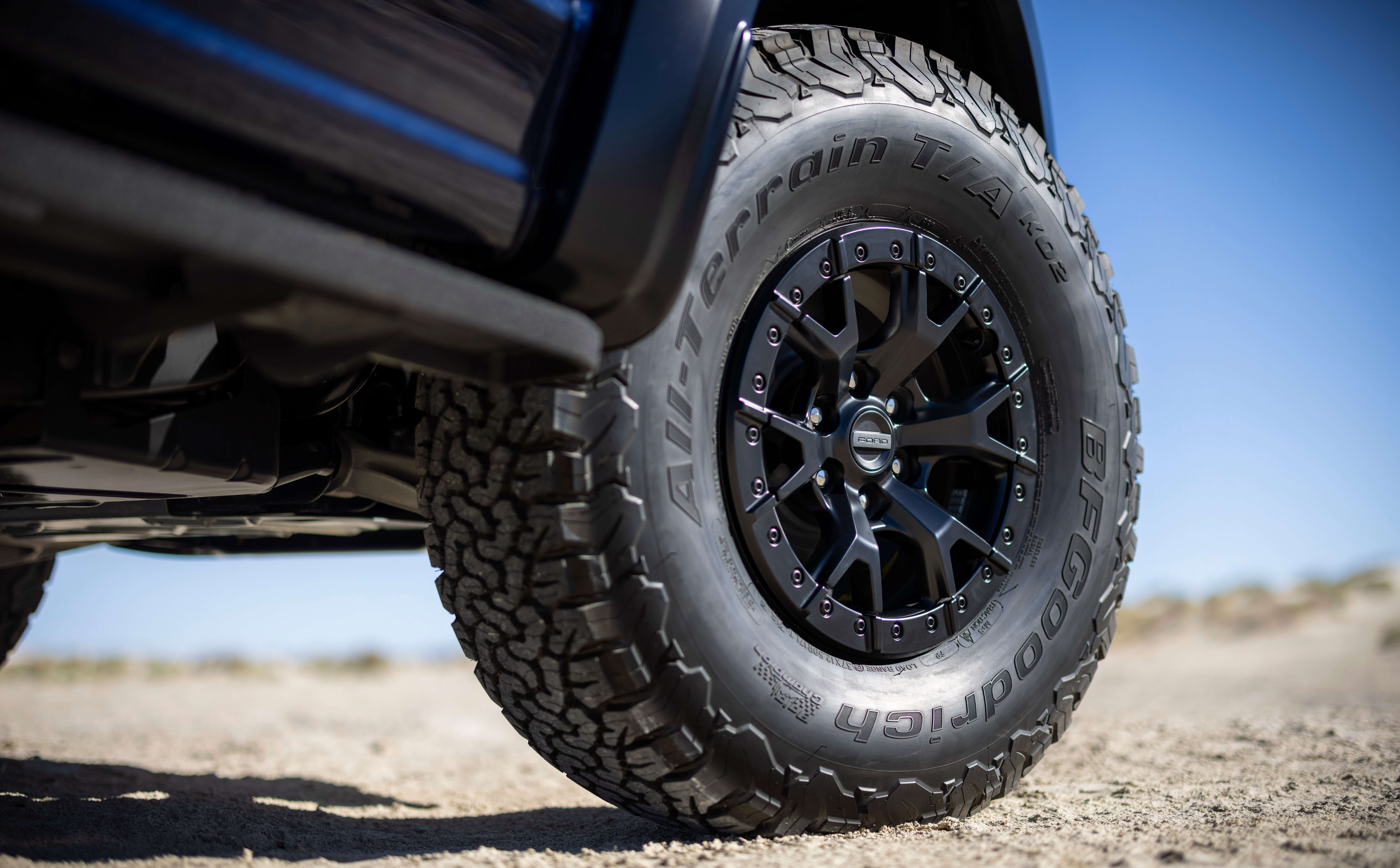 Though the differences are subtle, you’ll know you’ve come across a Raptor R in the wild when you look for a few key exterior features. First, the latest version has a more aggressive hood that sits slightly higher than the regular V6 version. Next, you’ll notice the distinct orange R on the tailgate, grille and other parts of the truck. The unique design is also meant to resemble harsh, cracked desert earth, to remind you of the type of environment where a Raptor (both beast and truck) is built to thrive.

While you could already choose from eight different shades for the exterior, the Raptor lineup now includes two new options: Avalanche Gray and Azure Gray Tri-Coat.

Once again, there isn’t a stark contrast between this and other F-150s on the inside, but the Raptor R does have some distinct styling details. You get black leather and microsuede upholstery to go along with standard Recaro seats and cabin features. There’s also an R button on the steering wheel that lets you automatically access your preferred driving mode. 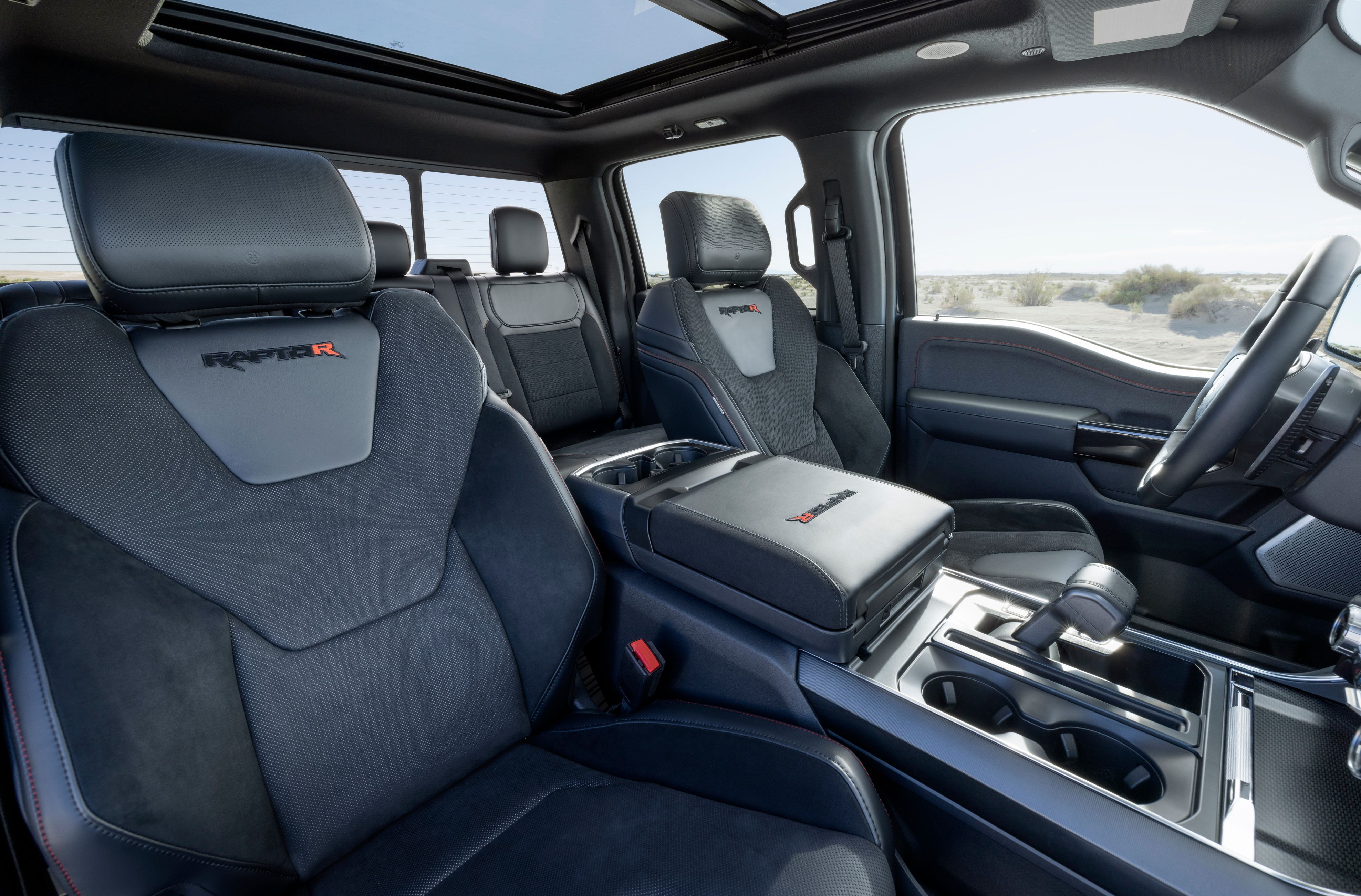 The 2023 Ford F-150 Raptor R pricing begins at $109,145. As of this writing, Ford is set to release the ferocious super truck in the fall of 2022. You can put your order in for one now. If the six-figure price is too rich for your blood, you’ll find plenty of listings for earlier versions of the Raptor on KSL Cars.