With its new styling and robust powertrain, the BMW M440i Gran Coupe is a solid entry into the luxury sports sedan market, but has a bit of an identity crisis.
Car Review

Few things have captured the attention of the automotive world in recent years like BMW’s new styling language. It’s a dramatic departure from what has come before, and BMW’s increasingly large grilles, sharp lines, and bold angles have divided even the most dedicated Beemer enthusiasts.

A giant step below the hair-on-fire M4, the four-door M440i Gran Coupe is an exercise in attempting to be something for everybody. This multiple personality approach led to some interesting results in our week of testing. Let’s dive in and see what the M440i has to offer prospective buyers.

The MSRP range for the 2022 BMW 4-series Gran Coupe is $45,200 - $48,200. It is available in two trim levels, with a suite of standard features that includes a power tailgate, perforated upholstery, dynamic stability control (DSC) and dynamic traction control (DTC). Some of the major differences in trim levels are noted below:

The M440i Gran Coupe we drove had a sticker price of $67,520. That’s a lot of money for a relatively compact sedan, but if you’re looking for a sports sedan that’s also fairly practical, the BMW M440i is actually a decent value. BMW also includes a nice four-year, 50,000-mile limited and powertrain warranty, along with BMW’s “Ultimate Care” package, which covers three years or 36,000 miles (whichever comes first) of all scheduled maintenance. 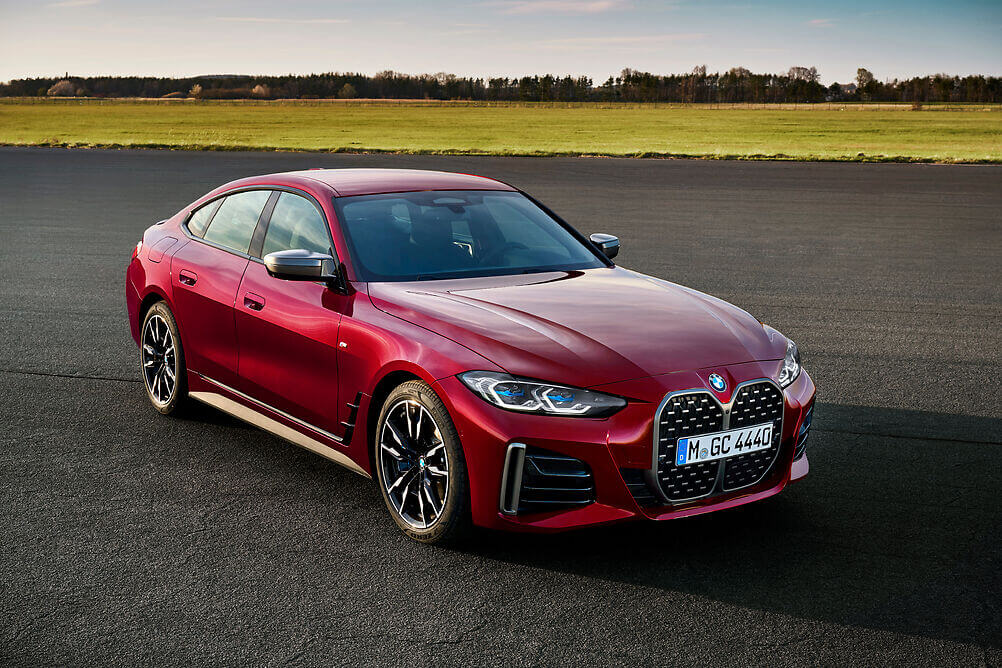 Performance is where the BMW M440i shines the most. The performance in sport mode is glorious. BMW’s done a wonderful job with this engine and transmission, and BMW deserves praise for such fine-tuning. While other drive modes are selectable, sport mode is so much fun you’ll want to keep it there all the time.

The M440i comes with BMW’s 3.0-liter turbocharged inline six-cylinder that produces 382 horsepower and 368-pound feet of torque. This thing moves. Turbo lag is non-existent thanks to a mild hybrid assist, and if it weren’t for the turbo sounds, you wouldn’t know it was turbocharged. In typical BMW fashion, power delivery is buttery smooth and sounds amazing. It’s such a good engine it’s almost boring. Almost.

Surprisingly, the M440i is actually a very efficient vehicle! Even after being driven hard, the BMW returned very respectable fuel economy despite its big power numbers. EPA estimates place the M440i at 22 mpg in the city, 29 mpg on the highway, and 25 mpg combined. That’s in line with what we experienced, which was around 27 mpg combined.

This BMW is a rocket. According to BMW claims, 0-60 mph happens in 4.4 seconds, but it feels faster than that. Despite the speed, however, it’s never really overly exciting. It’s always buttoned-down and clinically cold in its execution. The same goes for the handling. It’s decent in sport mode and … not great in comfort mode. The M440i wants to be a sedan and a luxury cruiser but it feels like it can’t commit to either one.

Buying the M440i means you get the special M Sport brakes with blue or red calipers. They look cool but I’m unsure of any performance advantages over the regular 4-series brakes. 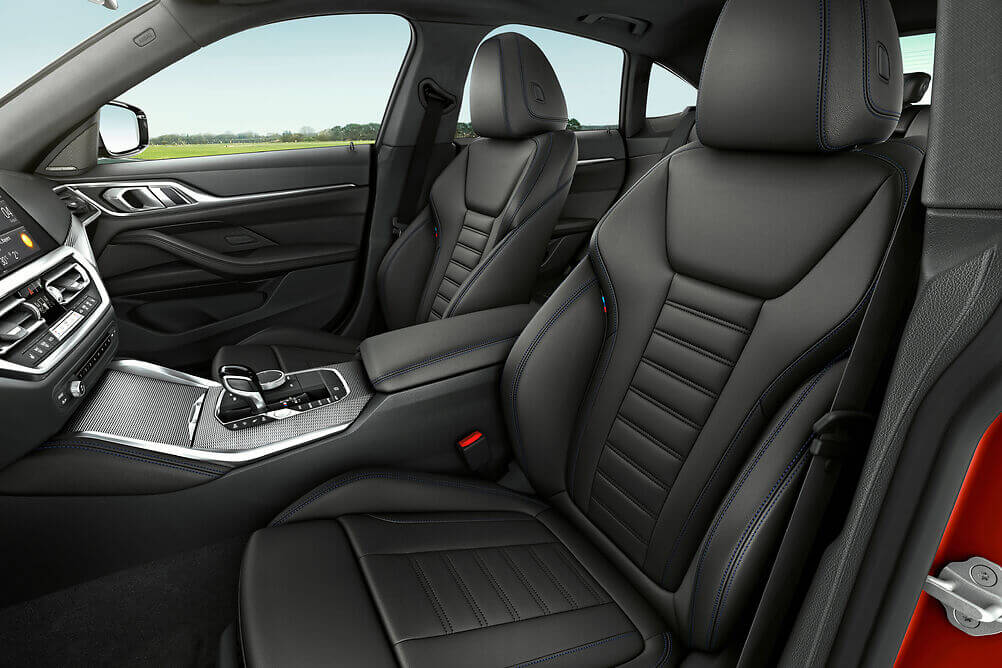 If you’ve seen one BMW interior, you’ve seen them all. BMW has fully committed to a universal, corporate look to all their models’ interiors, which isn’t necessarily a bad thing, because it’s a good interior. It’s got a good look and feels well built. It’s comfortable for the most part, but back seat occupants might feel a little claustrophobic — after they manage to maneuver themselves around the C pillar hump and onto their respective cushions.

BMW has always done nice seats, and the sport seats available in the four-door M440i Gran Coupe are no exception (although they don’t feel all that special, given that they’re the same sport seats available in other models like the X3 xDrive30i.) The backseat, however, is another story. It’s difficult to get into and is only suitable for two medium-sized adults. Headroom is also very limited, even for people of average height, so if you’re anything close to six feet tall you may want to look elsewhere. The Sensatec upholstery is always nice and didn’t have me missing genuine leather at all. I only wish the heating elements got hotter in the frigid days of winter.

I normally really like BMW’s climate controls but for some reason this time around they had me a little annoyed. The buttons seemed hard to find and too small to easily locate. Additionally, I found it took a while for the cabin temperature to rise, which is no fun in the cold of winter, especially when the heated steering wheel doesn’t get very toasty (the steering wheel itself is amazing). However, as someone with allergies, I did appreciate BMW’s microfilter and automatic air recirculation features that kept the cabin feeling clean and smelling fresh.

One of the main draws to buying the Gran Coupe is the added utility of a hatchback. There’s immense space in the cargo area, probably more than you’ll need (16.6-cubic-foot cargo volume with the second row up, 45.6 cubic feet with them folded down). Despite the increase in trunk space, I still wish they would have reduced the cargo space and increased the rear seat legroom. The proportions are … odd. In any case, there’s lots of room in the rear, but not much in the main cabin. Oh well.

BMW’s Live Cockpit Professional features a 12.3" digital instrument cluster and 10.25" central information display. The gauges are cool, but I found them difficult to make sense of at a glance. Is more always better? BMW seems to think so.

The center infotainment screen looks amazing. It’s crystal clear in its resolution, although the backup camera was lacking in sharpness and clarity. BMW’s iDrive infotainment system takes some time to get used to, but once you do, you’ll like it, whether you touch the screen or use the dial. Apple CarPlay and Android Auto are wireless and work without hesitation. The stereo’s sound quality is excellent, as you would expect from an $875 Harman Kardon sound system. 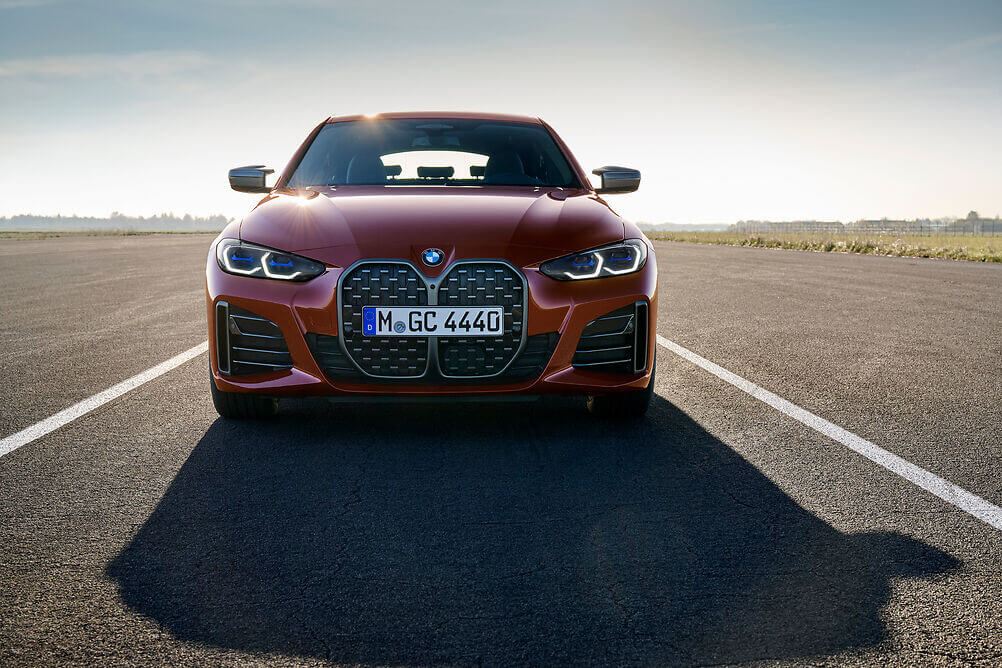 Styling is largely subjective, and for me, the BMW M440i just doesn’t work. It hurts to look at. I don’t know what BMW is doing over in Munich, but it’s not motivating me to spend $67,520 on an M440i. The proportions, lines, vents … don’t make much sense to me, the worst offender being the gigantic, snout-like grille. I did enjoy the San Remo Green Metallic paint, but not even those brilliant green hues can save what is a half-sporty, half-luxurious exterior with extremely difficult to grip door handles.

This is a rare misfire from BMW’s wheel design department, but I didn’t love the 18" M aerodynamic bi-color wheels. They looked cheap and didn’t pull together the rest of the exterior elements. Thankfully our tester was equipped with Pirelli SottoZero winter tires and they performed well in the snow. 18” wheels aren’t huge by modern standards, so road noise was nicely subdued on the highway without much interference in the cabin.

BMW’s headlights might not be attractive but they do give off a good amount of light at night. We especially appreciated the LED welcome lights that illuminate under the car so you can see the car while approaching it at night. The turn signals have a nice sound to them that isn’t annoying or too loud.

The BMW M440i we tested was equipped with the optional Parking Assistance Package, which includes features like parking assistant plus, Active Park Distance Control, a rearview camera and Surround View 3D.  The side mirrors offered decent visibility but felt a bit small (despite being stylistically interesting). They appear to attach to the A-pillar at the top of the mirror, but they actually only attach on the bottom half of the mirror. Interesting.

Visibility is decent in the M440i, but it’s not great, as the windows are quite small. I did enjoy the view out the front over the hood, though. Something about it reminded me of driving my old Acura Legend, which is a good thing. 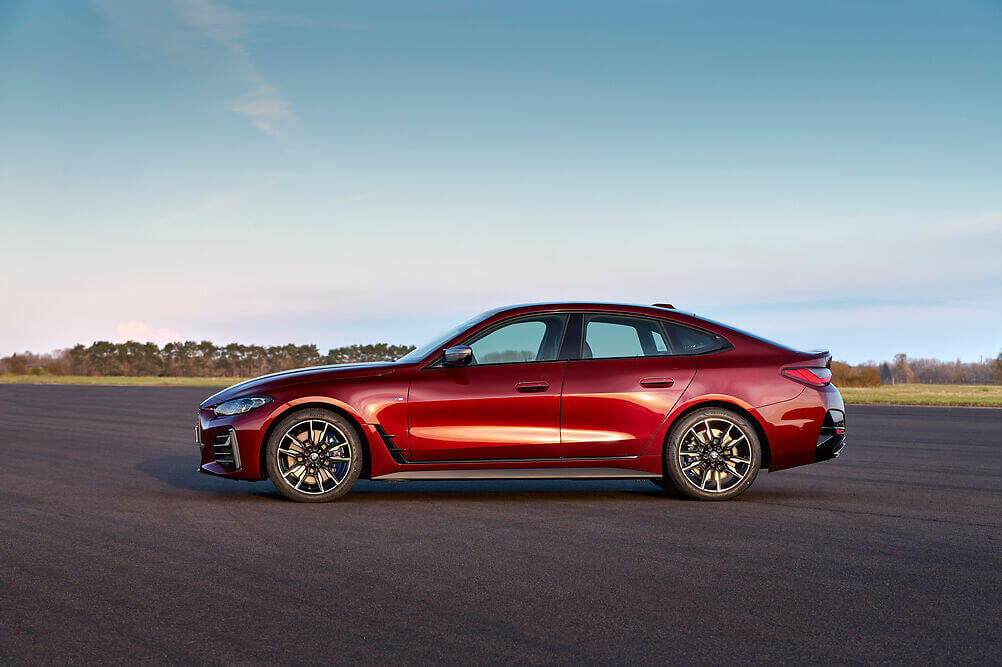 The BMW M440i Gran Coupe has not been rated by the IIHS or the NHTSA as of this writing. While no scores are present yet, it can be reasonably assumed that with its vast array of safety features and airbags, the BMW will score quite well. The 4-series sibling, the 3-series, was awarded a 2022 Top Safety Pick from the IIHS, so the 4-series should score similarly.

For nearly $68,000, you should expect a certain level of safety features to be standard. A few of them on the M440i include:

For a full breakdown of the M440i’s safety features, you can visit BMW’s website. 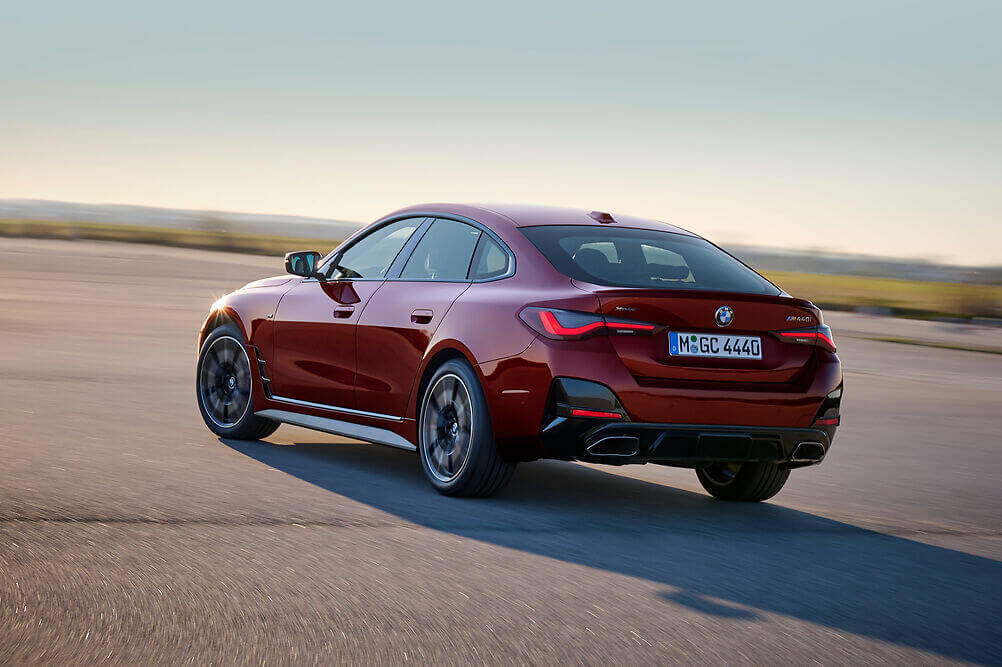 After spending a week with the BMW M440i Gran Coupe, I’ve concluded that this vehicle is a bit of a mixed bag. In sport mode, with all your custom settings dialed in, it’s a pretty good sport sedan — as long as you’re willing to make some compromises on style and interior space for passengers. In comfort mode, this is an extremely overpriced commuter. The M440i tries to split the difference between luxury and sport, without fully embracing either. It’s fun — until it's not. It’s so buttoned-down that it’s almost boring, even when you’re driving it hard. It’s the stoic teenager that just can’t let loose and have fun for a minute. The potential is there and they’re along for the ride, but they’ve been staring at their phone too long to know who they really are. That said, if you’re looking for a unique sporty sedan that is easy on gas, then you’ll probably be pretty happy.

Is the BMW M440i Gran Coupe fun to drive?

Yes and no. If all you care about is acceleration and a wonderful soundtrack, then you’ll love the M440i. If you’re expecting M4 levels of handling, you’ll be disappointed.

Is the BMW M440i Gran Coupe good for families?

While there is decent space in the cargo area, there isn’t much room in the back seat for kids. It’s decent, but probably not what you would want to tote kids around in over the long term.