Roomy and efficient, the compact crossover aims to impress in an ever-crowded segment.
Car Review

After a week of driving the 2022 Chevrolet Equinox RS AWD, I wondered who this SUV is designed for. Its docile nature certainly won’t satisfy everyone, but there are strengths. It’s comfortable, with plenty of rear-seat legroom and cargo space. Drivers wanting something efficient will value the safety and fuel economy. It’s also decently equipped, with enough technology to keep the driving experience simple.

The MSRP range for the Chevrolet Equinox is $28,595-$33,795. It comes in four trim levels, with a suite of standard features including a 1.5-liter turbocharged 4-cylinder engine, Chevy Safety Assist and keyless entry. Some of the major differences in trim levels are noted below.

The Equinox is priced higher than some of the competition, but the features outweigh the difference. Trim prices are close enough that I recommend getting the RS or Premier level. Chevy’s warranty is the industry standard, with 3-year, 36,000-mile basic coverage and 5-year, 60,000-mile powertrain coverage. 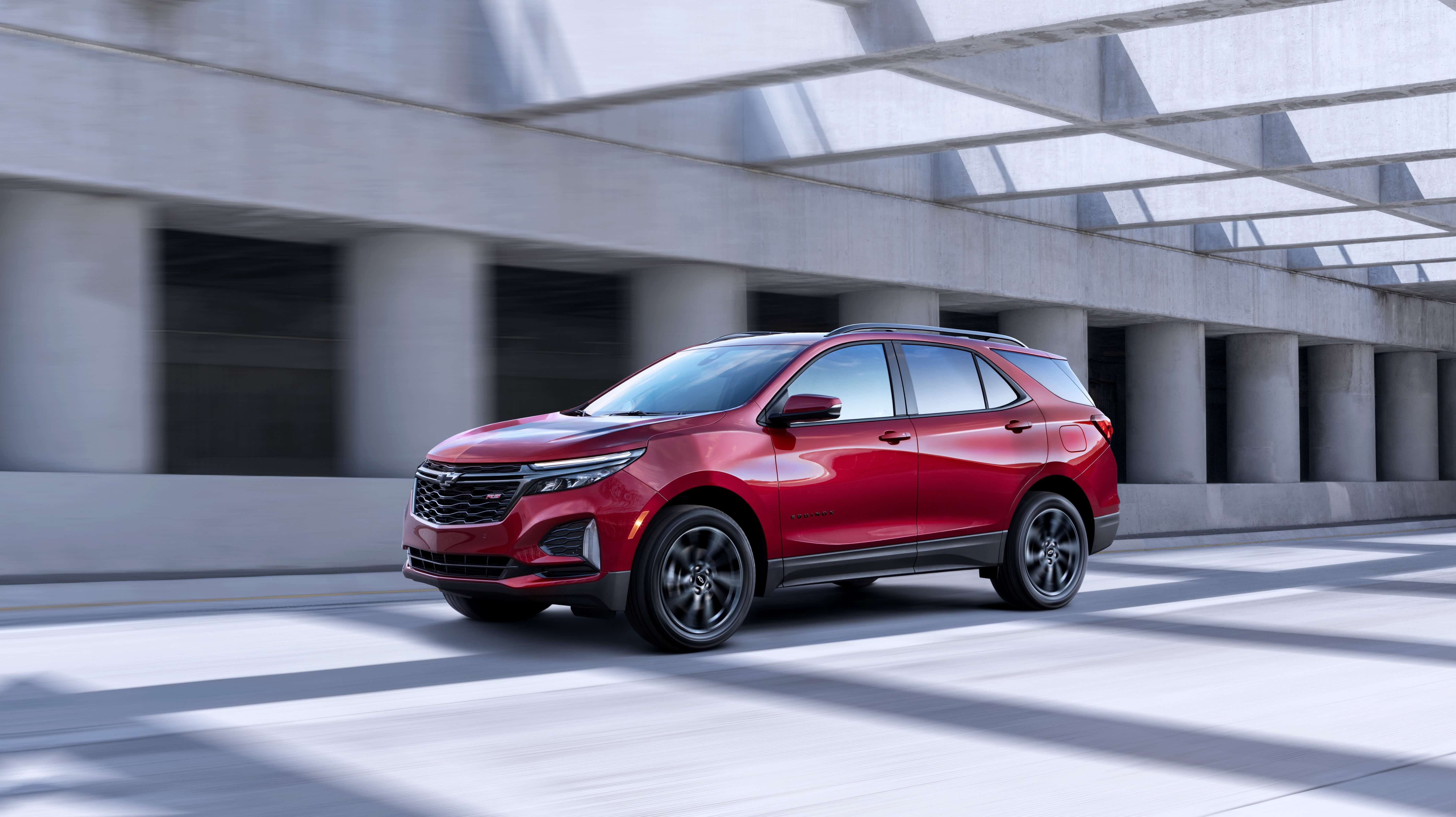 The Chevrolet Equinox is not intended to be a performer. Instead, it’s all about simplicity. Power? Overrated. Space? You got it. The RS trim handled fairly well, without too much roll. If only it had the power to match the handling.

Chevy’s tiny 1.5-liter turbocharged four-cylinder is the weak link in the Equinox. You can feel the motor straining for every ounce of power that just isn’t there, like coming up for air after being underwater too long. The engine generates 170 horsepower — 40 less than it should — and 203 pound-feet of torque. Although rated to tow 1,500 pounds, that seems unwise given the exasperating attitude of the engine.

One of the major selling points of the Equinox is fuel efficiency. The EPA rates the Equinox at 25 mpg city, 30 mpg highway and 27 mpg combined. Not bad considering the vehicle’s size. My week with the Equinox yielded similar numbers, leaving me impressed with its fuel economy.

The RS tester was outfitted with all-wheel drive, although the Equinox is available in front-wheel drive as well. Interestingly, the vehicle allows you to toggle the all-wheel-drive system on and off at will. When enabled, it did a decent job providing power to the appropriate wheels in slushy conditions. All trim levels are equipped with a 6-speed automatic transmission.

Pedal mashed to the floor, the Equinox wallows its way to 60 mph in 8.9 seconds (as recorded by Car and Driver), or roughly as fast as grandpa’s 1998 Buick Park Avenue. Where acceleration struggles, the handling shines when it comes to cornering.

The Equinox excels as a safe transporter. Car and Driver measured its braking stop from 70-0 mph in just 161 feet. All models come standard with Chevy Safety Assist, which includes brake assist features like automatic emergency braking and front pedestrian braking. 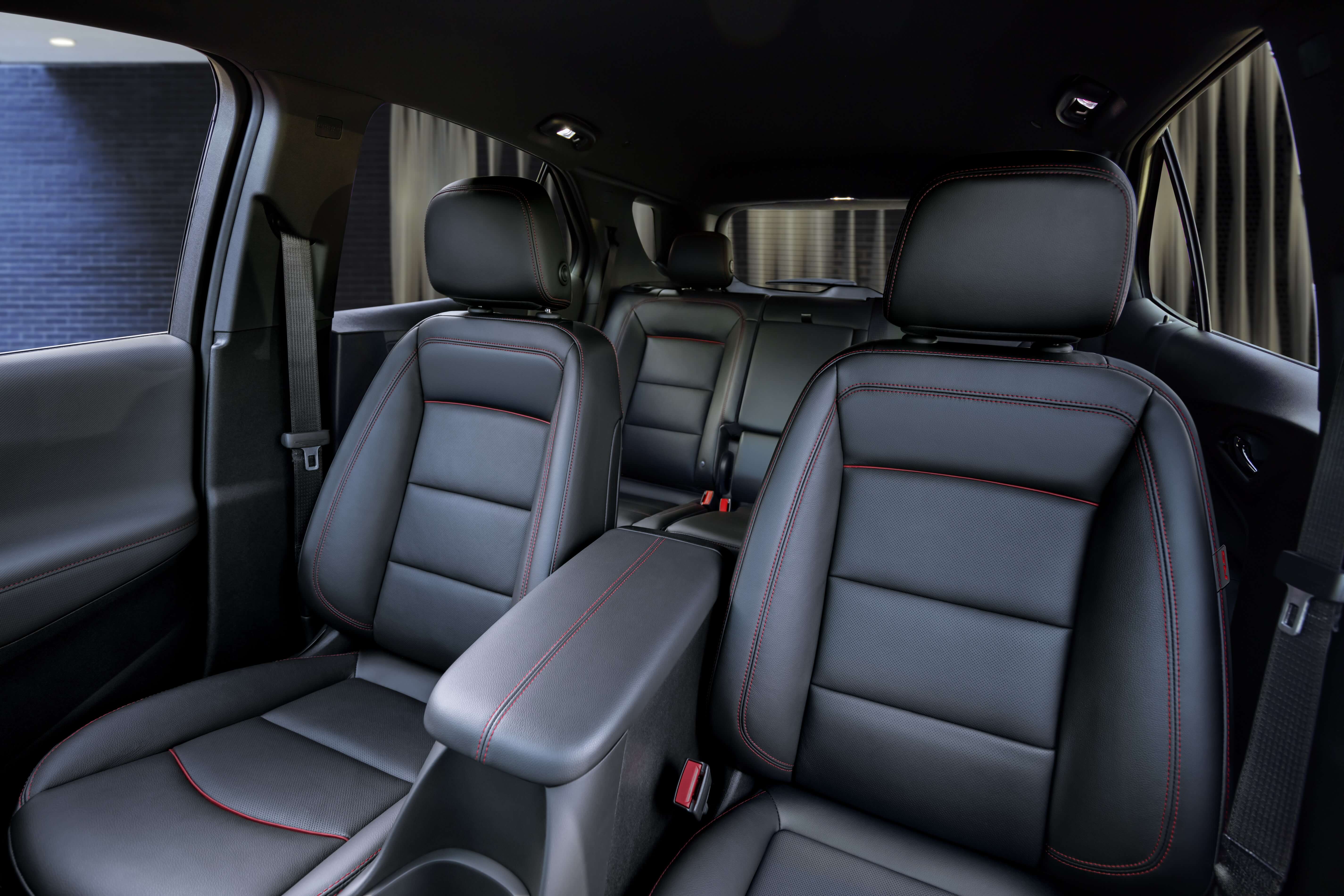 Springing for the RS trim gets you into leather seats. They look nice; if only they were more comfortable. Medium to large-sized drivers should look elsewhere. The heating elements worked well, as did the heated steering wheel. Ventilated seats are not an option.

The Equinox has easy-to-use climate controls, including lots of physical buttons and dials. My RS tester had dual-zone automatic climate controls that heated the cabin quickly and without much fan noise.

Cargo space is another big selling point of the Equinox. Boasting 29.9 cubic feet of storage behind the second row, and 63.9 feet behind the first, it feels downright cavernous inside. The center console and door pockets are a bit smaller than average but can hold some basic necessities.

Chevy’s infotainment continues to be one of the more user-friendly and simple systems on the market. It’s easy to use, looks nice and has all the basics most drivers need. My tester was fitted with an optional 8-inch display, made available with the Infotainment Package that also included Apple CarPlay and Android Auto. Bose stereos are always nice, and the optional seven-speaker system did not disappoint. 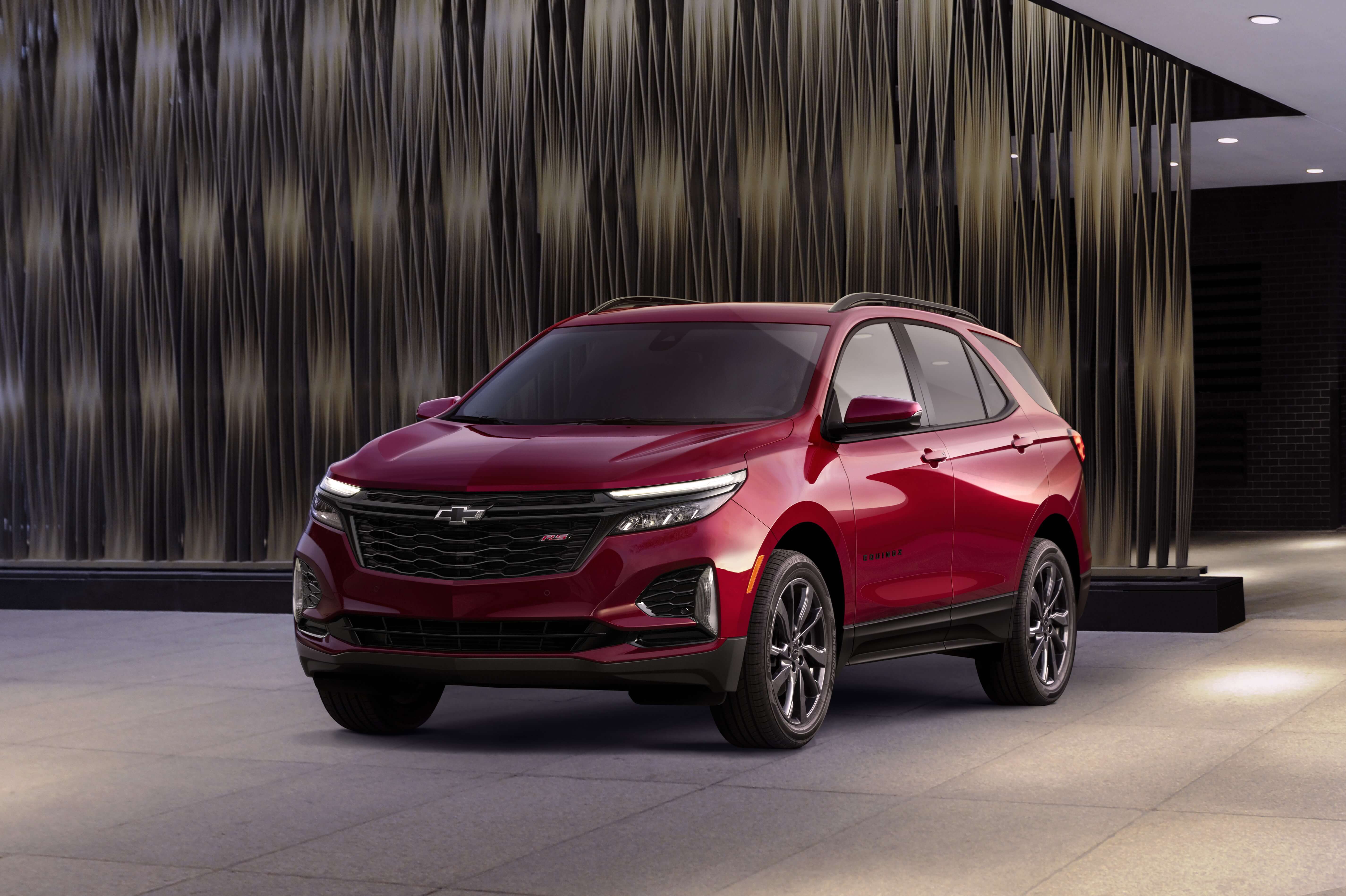 Continuing the theme of blending in and maintaining the status quo, the Equinox in RS trim looks decently attractive, but not distinct from other SUVs in the segment. The tester’s charcoal paint suited the vehicle well. Other color options are mostly monochromatic, except for Chevy’s Blue Glow Metallic paint and Cherry Red Tintcoat.

As mentioned previously, the Equinox is capable of towing 1,500 pounds, but that doesn’t mean that you should. Just ask Jeff Goldblum.

My RS model was equipped with the RS trim’s exclusive 19-inch “dark android” aluminum wheels. While they looked cool, they did make for a rougher ride than expected.

The car is well named. Between LED headlamps, daytime running lights and tail lamps, the Equinox put out a lot of light. Mine also had the handy Intellibeam feature, which automatically adjusts high beams based on surrounding traffic.

My test ride came with a rearview camera with nice resolution, but I wish more cameras were included in the price. A Forward Collision Alert system uses a front camera for collision detection. The heated side mirrors are activated when the rear defogger is engaged. Both side mirrors are power-activated.

The Chevy Equinox has a large front windshield for clear viewing. The rear windows come factory-tinted and are easy to see through. Standard defrost features are included.

One of the Equinox’s strengths is its safety. Given its docile personality, coupled with a nice suite of safety features and robust safety ratings, it would be difficult to get into too much trouble with it.

The Equinox RS I tested had a number of notable safety features. 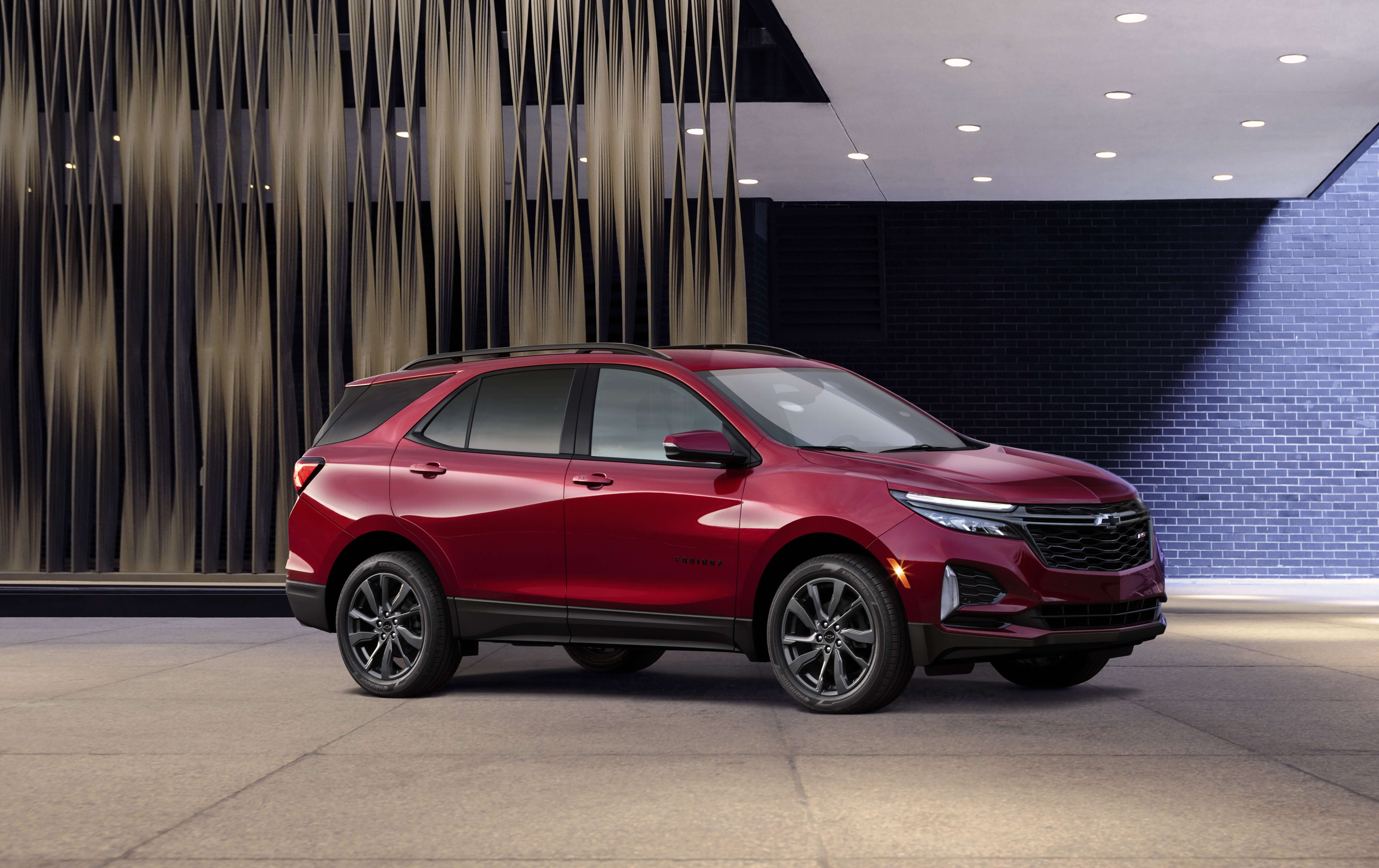 The 2022 Chevrolet Equinox is in a crowded and highly competitive playing field. While it lacks the power some may want, it excels in rear-seat space, cargo capacity and safety features. If it were my money, I’d go for the RS or Premium trim, given its decent value proposition. Find 2022 Chevrolet Equinox listings on KSL Cars.

Who should buy the Chevrolet Equinox?

If rear-seat room, cargo space, fuel economy and safety are your priorities, you’ll find a lot to love with the Equinox.