Infiniti’s whale returns for the 2022 model year, and it’s better than ever. If old school luxury family hauling is what you’re after, you’ll find a lot to like here.
Car Review

The 2022 Infiniti QX80 is an upscale, attractive and luxurious full-size SUV. Its solid build and pillowy ride are superb, and the thrum from the V8 engine is sentimentally comforting. Infiniti has done a nice job updating the QX80 over the last 12 years, so much so that its age is only just starting to show. Need a lavish, stylish V8 in an old school body-on-frame? Look no further. This one can (mostly) haul the whole family while simultaneously towing a boat. Is it worth close to $90,000? That will be up to you. 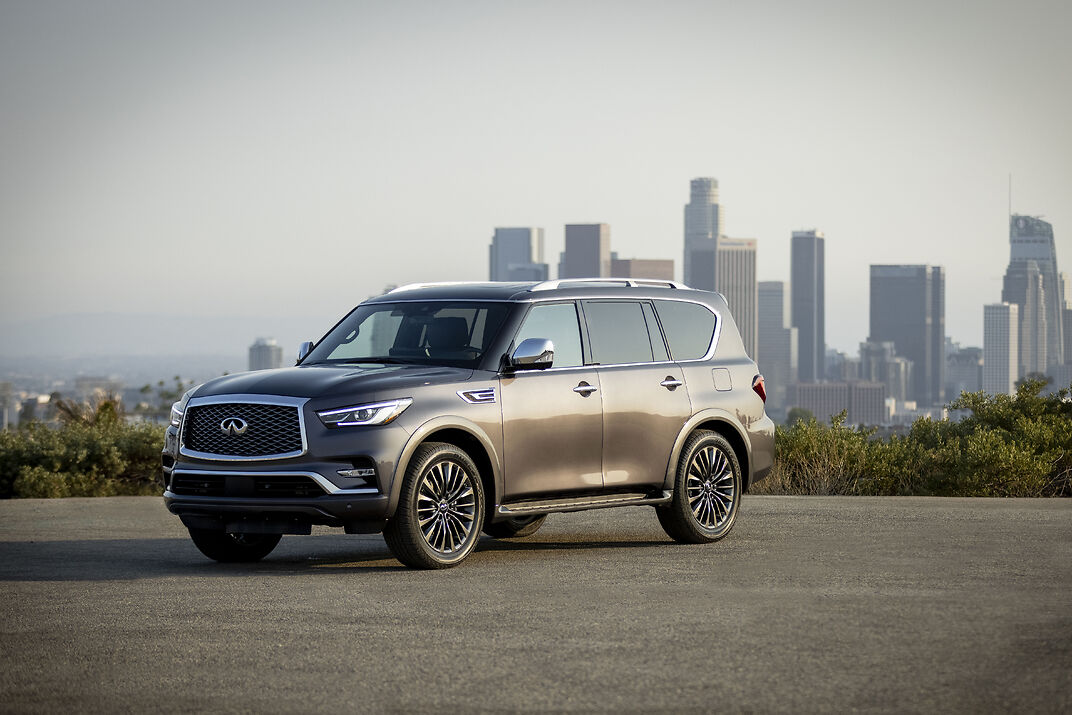 The MSRP range for the 2022 Infiniti QX80 is $71,995-$83,630. Our well equipped tester topped out at $87,895. It comes in three trims: Luxe, Premium Select and Sensory. The suite of standard features includes forward emergency braking, designed to detect pedestrians, as well as intelligent cruise control. Each trim includes a V8 and either four-wheel or rear-wheel drive. Some of the major differences in trim levels are noted below. 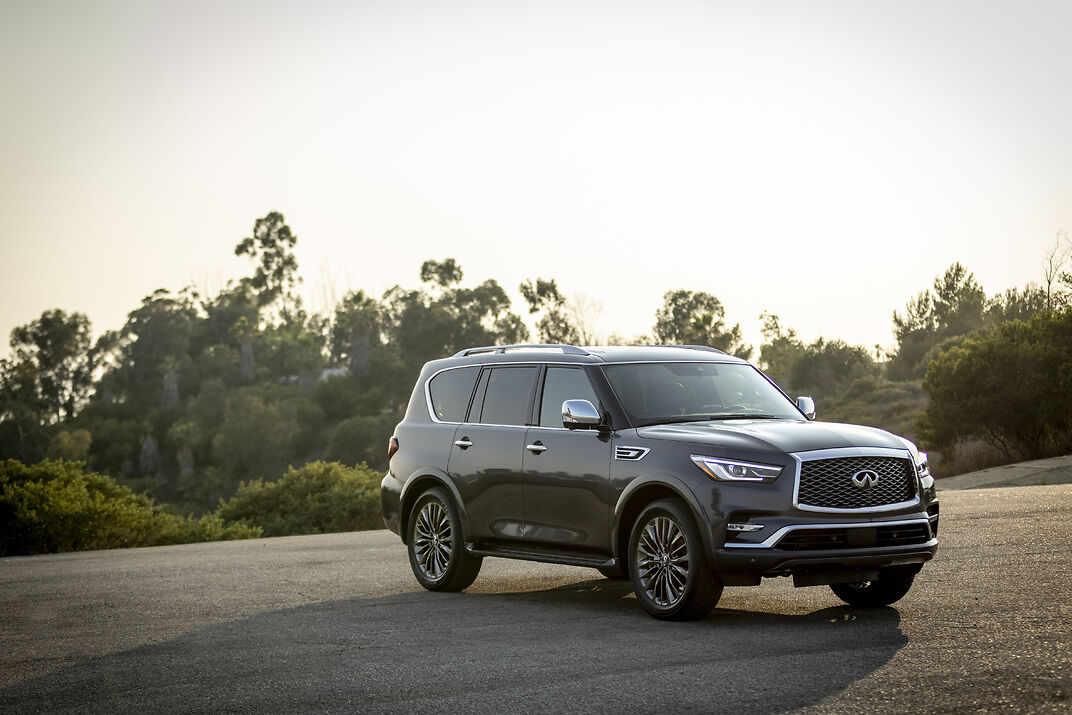 We love that Infiniti hangs on to its V8 engine in the QX80. It’s smooth and serene in its power delivery, and we enjoy the sound it produces. It’s not much of a handler, though. Instead, the QX80’s mission is to provide effortless, cloudlike comfort with plenty of power on tap for when you need it.

Infiniti soldiers on with its 5.6-liter V8 engine. As they say, if it’s not broken, don’t fix it. The V8 produces 400 horsepower and 413 pound-feet of torque, and can tow up to 8,500 pounds. The motor is strong and seamless in its power delivery, which only adds to the QX80’s smooth as butter demeanor.

Everything comes with a cost. While an old school V8 is awesome to put your foot into, the fuel economy suffers. The Environmental Protection Agency estimates 13 mpg in the city, 19 on the highway, for a combined 15 mpg. We did achieve better than that in our week of testing a QX80, averaging about 18 mpg combined.

The QX80’s burly V8 pairs nicely with its 7-speed automatic transmission. Shifts happen smoothly and relatively intuitively. The QX80 is equipped with a 2-speed transfer case and a drive mode selector for auto, 4H, 4L and snow modes. We were unable to test the four-wheel drive, but we assume most people won’t be off-roading in this anyway — especially with the standard 22-inch wheels.

The QX80’s powertrain makes relatively light work of its hefty 5,915 pounds. According to Car and Driver, it lunges off the line to 60 mph in 5.9 seconds. Quick, but not exceedingly fast. Due to its tall center of gravity and bulbous weight, the QX80 is a floater. And that’s just fine if you want to do what Infiniti put the QX80 on this earth to do: cruise. 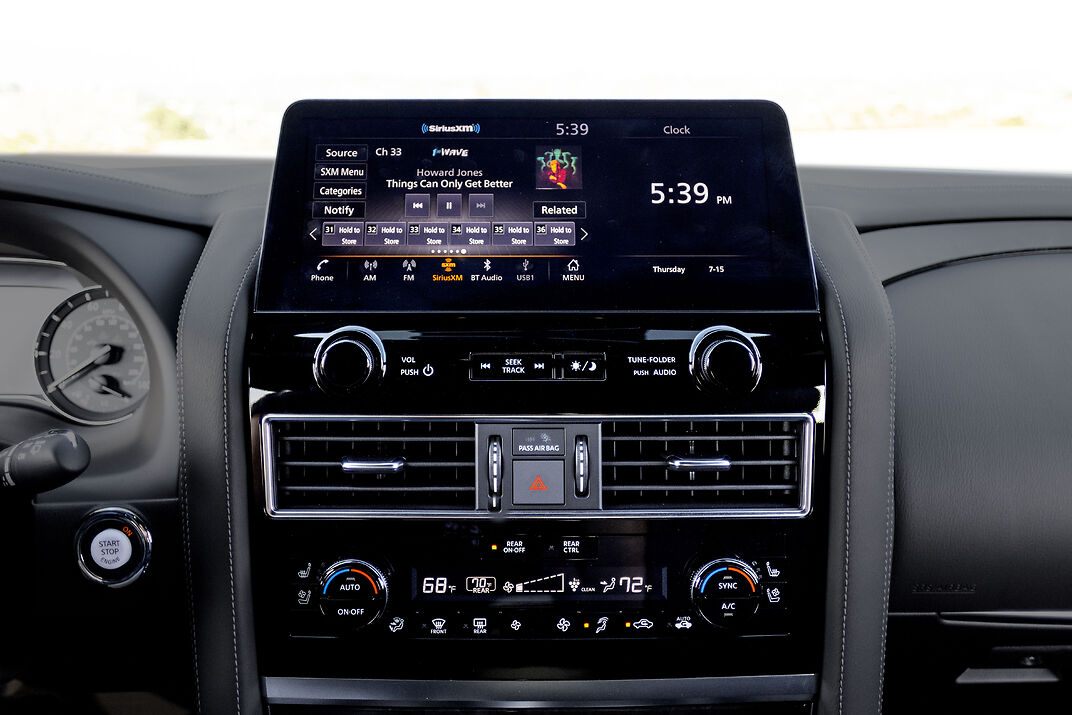 The QX80’s svelte exterior styling is extended to the interior in some fairly luxurious ways. The build quality feels solid inside, and the leather and wood combination is attractive. You sit high in the QX80, which offers a commanding view of the road.

Oddly, some modern luxury features such as a panoramic sunroof and heads up display are absent, even in the top trim. There is plenty of room for four passengers. Smaller families will love road tripping in this comfortable and spacious SUV — even if it is starting to feel a little dated.

The front seats and second row captain's chairs in the QX80 are amazing. Soft, wide and supportive, they’re made for long road trips, especially with their commanding and high position. The front seats are heated and ventilated, performing well for us on cold and warm days. The second row in our Sensory trim was also heated. The quilted stitching of the semi-aniline leather looks rich.

Where the QX80 falls short is in the third row. It’s cramped and sits low to the floor, making it uncomfortable even for small children. The third row has powered reclining and folding, but the motors are lethargic, making us wish for simple pull release straps. 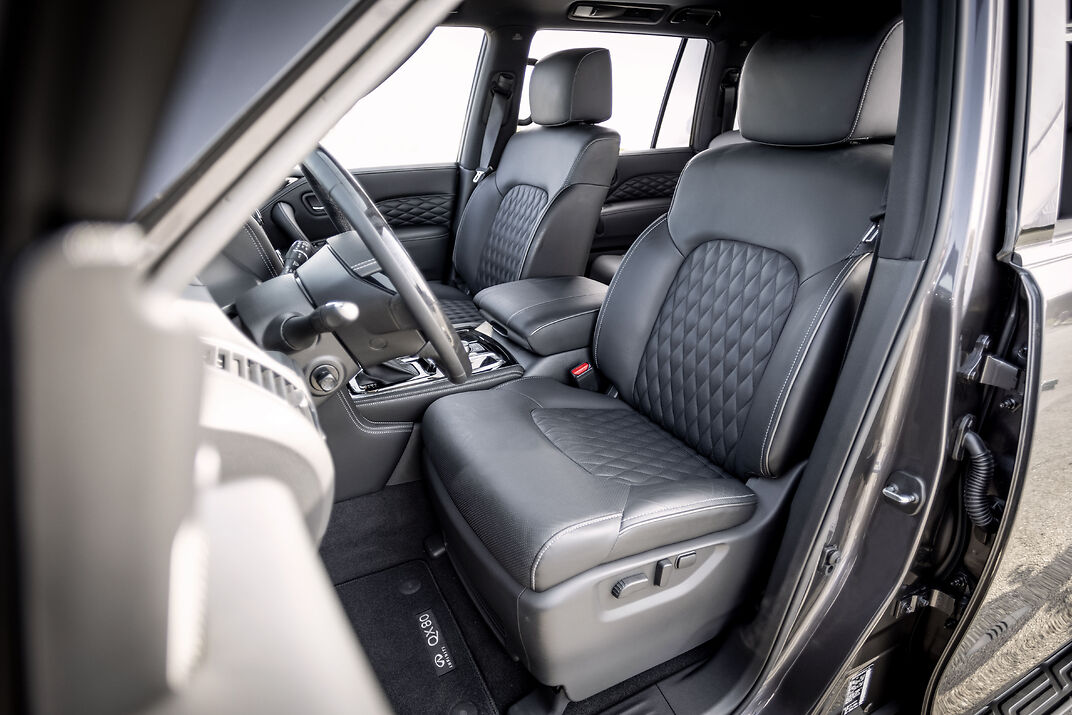 The QX80 retains several physical buttons for its climate control, including dual knobs for its dual zones up front. There is also a third zone for the rear occupants. The QX80 was also equipped with the brand’s advanced climate control system, which is supposed to not only heat and cool, but also clean the cabin air. The system worked well without too much fan noise.

With the third row folded down, the cargo space in the rear is cavernous. If you can’t fit all your stuff in here, you need to make a stop at Deseret Industries. The QX80 has 16.6 cubic feet of cargo space behind the third-row, 49.6 cubic feet when folded down. With both the second and third row down, there’s 95.1 cubic feet. The center consoles are deep and spacious, as are the door pockets. A power liftgate is standard, but it is a little slow to close.

The big news for the 2022 QX80 is the 12.3-inch infotainment touch screen. It’s large and looks sharp. It is angled backward slightly, which can make it difficult to reach for shorter-armed drivers and passengers. It includes wireless Apple CarPlay, Android auto, HD radio, a 17-speaker Bose stereo, a wireless charging pad and a rear seat entertainment system. 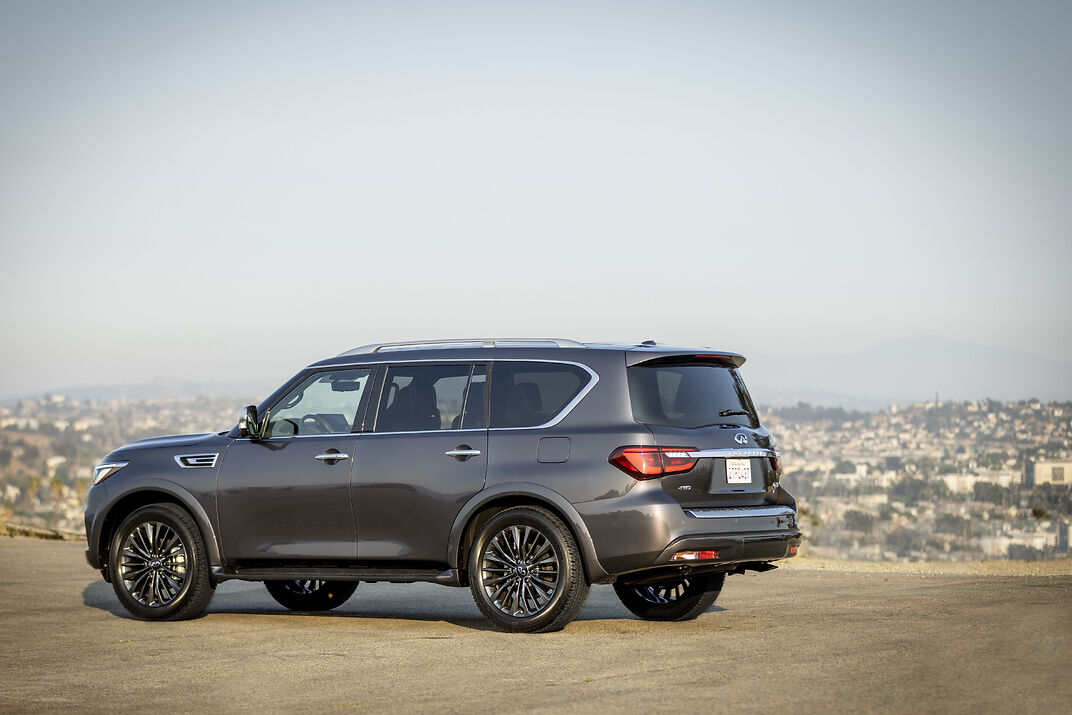 The current iteration of the QX80 has been around 12 years. You’d think it would look outdated, but Infiniti has done a great job keeping it fresh, especially with subtle changes to the front fascia in 2018. The QX80 has an imposing presence, making you feel like you’re king of the road. You probably won’t want to take the QX80 off-road with how nice it looks. It is available in all the standard grays and blacks, as well as premium colors such as Coulis Red and Champagne Quartz.

Towing is one of the main reasons to buy the QX80 today. With its 400-horsepower V8 motor, it makes light work of up to 8,500 pounds of towing.

One complaint we had was the 22-inch wheels. While they are stylish, they slightly diminish the otherwise cushy ride provided by the hydraulic body motion control system. If it were up to us, we’d stick to 20-inch wheels, especially if you’re traveling over potholes frequently. Thankfully, there wasn’t an unruly amount of road noise from the 275/50 R22 all-season tires, even with the larger wheels.

Another minor complaint of the QX80 concerns the cameras. For the price, you’d expect top tier resolution. At least the QX80 has them, including rear backup and surround view cameras. We only wish they were clearer.

If you like riding high, with large open windows and a commanding view of the road, you’ll love the QX80. Visibility is great all around, including out the rear — as long as that third row is folded down. Extra perks: rain sensing variable intermittent wipers for both front and back, and a defroster with a timer. 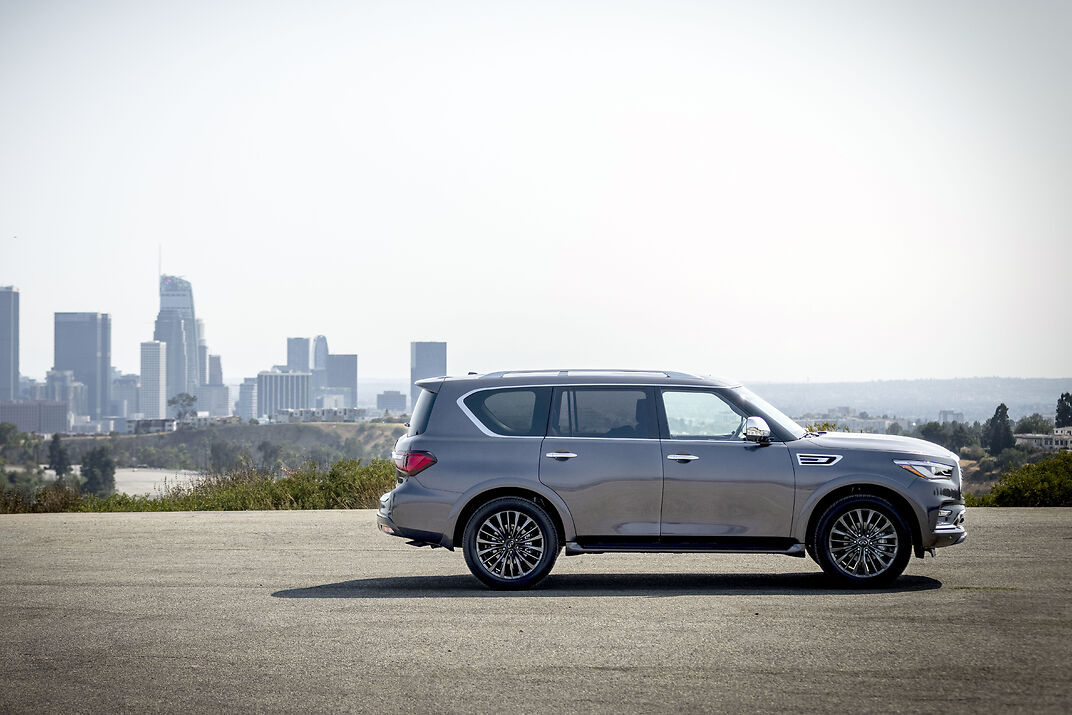 The QX80 is loaded with safety technology but surprisingly did not score exceptionally well in its crash test ratings. These ratings bely the secure feeling you have while in the QX80.

Infiniti has included a long list of safety features that families will appreciate. They can be found on Infiniti’s website, but a few highlights include:

The QX80 has not been a big awards winner. As safety ratings go, the 2021 QX80 received a four-star (out of five) overall crash test rating from the National Highway Traffic Safety Administration. The Insurance Institute for Highway Safety has not tested the QX80 as of this writing.

The 2022 Infiniti QX80 Sensory wants to play with the big boys. The infotainment update for 2022 is welcome, but the rest of the vehicle, while a very nice place to spend time, struggles to justify its nearly $90,000 price tag. We would recommend one of the lower trims for a greater value. While it’s due for an overhaul, you’ll still find a lot to like with its pillowy ride and old school V8.

Is the QX80 good for families?

Yes and no. If your family is small, and you can leave the nearly useless third row folded down, this is an excellent family vehicle. Kids will have no complaints about space in the second row. However, if you have a large family, you’ll quickly outgrow the constraining third row.

Again, yes and no. The QX80 is not sporty, aggressive or anything else in that vein. What it is, is serene. Which, after a long day at work, is a great thing. So if you think that quiet, relaxed cruising is fun, then yes it is fun to drive. Just don’t be expecting many adrenaline filled romps through the canyons.

Is the QX80 fuel efficient?

The short answer: not really. But, it is better than we expected from a V8. We averaged just over 18 mpg during our week of testing and even achieved over 22 mpg on one prolonged freeway drive.

Ready to dive into luxury? Find your new or previously owned Infiniti QX80 on KSL Cars.