Nissan’s new Pathfinder is a welcome return to form. Made for hauling families in comfort with a dash of ruggedness, it’s a solid option.
Car Review

The Nissan Pathfinder began as a rugged, off-road SUV in the ’80s, then morphed into a bland jellybean of a crossover for several years. Noting customers’ disinterest, Nissan steered back toward its roots. Now it’s a more rugged alternative to other midsize three-row crossovers and should be considered among the top competitors in the segment. While not quite the brawny off-roader you remember, the new Pathfinder strikes a balance of comfort and capability the whole family can enjoy.

The MSRP range for the 2022 Nissan Pathfinder is $35,780-$48,640. It is available in four trim levels, with a suite of standard features: Nissan Safety Shield 360, tri-zone automatic temperature control, Apple CarPlay integration and Nissan’s EZ FLEX seating system. Based on the four-wheel-drive configuration, below are some of the major differences in trim levels.

Overall, the 2022 Nissan Pathfinder is a good value, especially in SL trim. It lags behind some rivals in features, but the rugged looks, smooth ride and excellent fuel economy make up for some of the luxury shortcomings. The crossover carries a three-year/36,000-mile basic warranty and a five-year/60,000-mile powertrain warranty. 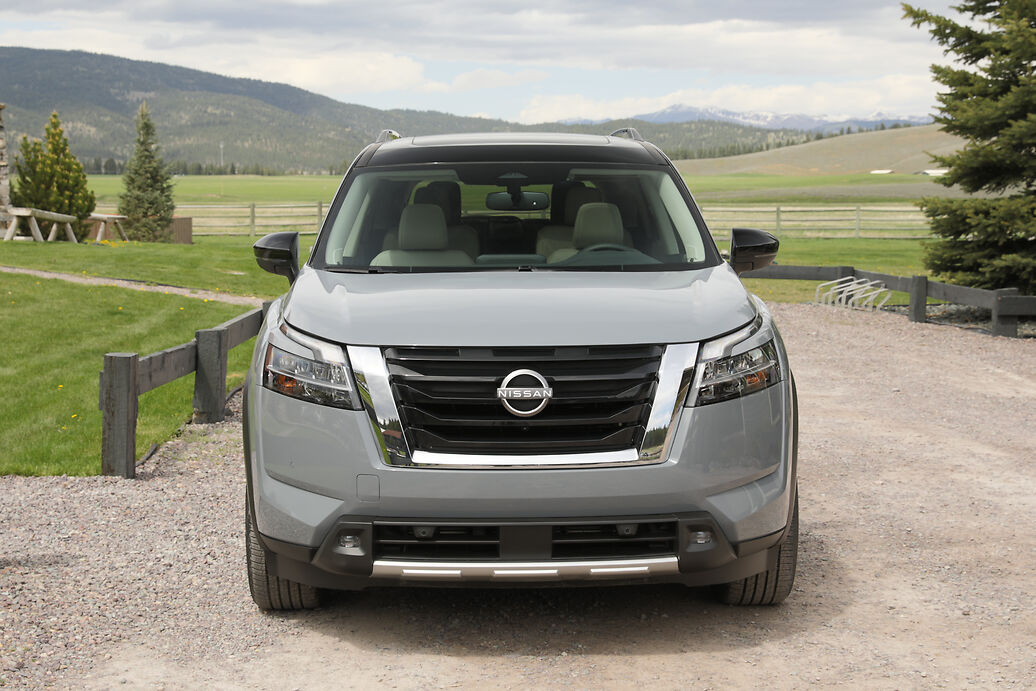 The Pathfinder comes with a V6 engine and delivers what you would expect in terms of performance. It’s perfectly adequate for most driving scenarios, and is simple and intuitive for family use. It’s not going to knock your socks off, but it’s also not a bore — or chore — to drive.

The entire Pathfinder lineup keeps the previous generation’s engine, which isn’t necessarily a bad thing.  It’s a naturally aspirated, 3.5-liter V6 with 284 horsepower and 259 pound-feet of torque. The SUV is a decent  hauler, with better than average towing capacity for the segment.

During our week of testing, it was surprising how well our fuel economy fared. The EPA estimates 20 mpg in the city, 25 on the highway and 22 combined. Our week of driving was slightly better than estimates, with close to 24 mpg combined and around 26 mpg on the highway.

Nissan has done a great job listening to its customers, and nowhere is that more apparent than the transmission upgrade. Gone is the rejected CVT, replaced by a nine-speed automatic transmission. The Pathfinder is available in two-wheel drive, but we recommend springing for the all-wheel drive.

Acceleration and handling aren’t usually the selling points of a three-row crossover, and they aren’t for the Pathfinder, either. That’s not to say it’s a slouch, but it isn’t the most exciting vehicle on the market. Car and Driver clocked the Pathfinder from 0-60 mph in 6.6 seconds, about average for the segment. The Pathfinder feels good in your hands, but the handling is a bit numb and likes to keep things low-key, which seems in line with how well it absorbs the bumps over rough pavement.

Braking in the Pathfinder felt fine and reasonable enough for an SUV this size. Car and Driver measured its 70-0 mph stopping distance at 79 feet. Automated emergency braking with pedestrian detection is not a standard feature. 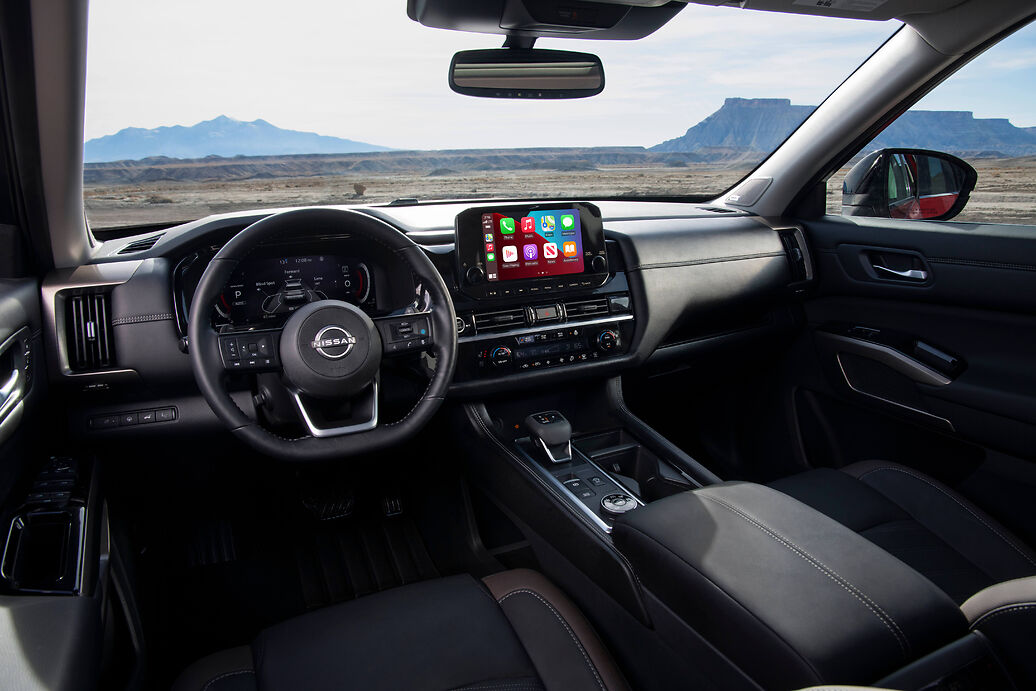 Nissan extended its restyling efforts to the interior, resulting in a genuinely comfortable and spacious cabin — distantly reminiscent of a truck. It’s a huge improvement over the previous generation, with a nice, clean design and a lot of soft-touch points. There is a lot of legroom up front and in the second row for children and adults. Third-row space is decent, but not the best in class. The Pathfinder continues to give excellent ease of entry for every passenger, including the third row.

The leather captain's chairs for the driver and front passenger are wonderful. Just soft enough to happily road trip in them. The same praise goes for the second row, where our kids had tons of space to themselves. The third-row seat is not very comfortable but will do in a pinch for smaller children. However, as good as the seats are, it’s a shame that at this price point the captain’s chairs are not ventilated on the SL trim.

Nissan’s tri-zone climate control system works well in the Pathfinder. Each area of the vehicle felt comfortable and reached the programmed temperature quickly. The controls are easy to use and intuitive enough for each occupant to operate.

Nissan has upped its storage game in the new Pathfinder, with plenty of cubbies and nooks — including a genius, large bin below the center console that’s accessible by the driver and front-seat passenger.

There’s also plenty of rear cargo space. It has 16.6 cubic feet behind the third-row seats, 45 cubic feet behind the second row and 80.5 cubic feet with all rear seats folded. That's better than average for a midsize SUV, but not the best we’ve seen. However, there is bonus under-floor storage, roomy enough for some bags, small equipment or groceries.

Nissan includes several standard features in the Pathfinder, including an 8-inch touch screen, Apple CarPlay, Android Auto, Bluetooth, USB ports, satellite radio and a six-speaker stereo. Our tester included a 9-inch touchscreen that looked great and was responsive and intuitive to operate. Wireless Apple CarPlay was a nice touch in our SL-appointed trim, as were the large volume and tuning knobs on either side of the screen. 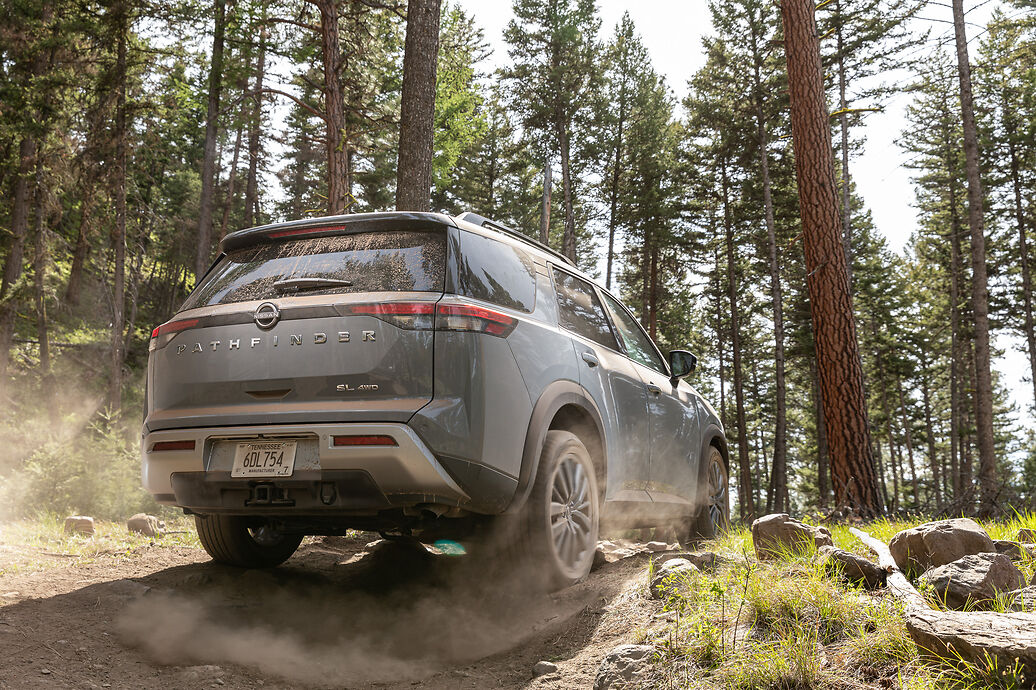 You can feel the Nissan designers reaching back to the glory days as you gaze at the Pathfinder’s rugged exterior. It’s a bolder, more brawny physique than the previous generation, and looks decently rugged — even if its performance is not. Our tester was finished in the nice-looking Two-Tone Boulder Gray Pearl/Super Black paint. Other interesting colors are Scarlet Ember, Obsidian Green and Gun Metallic.

The Pathfinder is a capable tower and is rated at 6,000 pounds — about 1,000 pounds more than most of the competition. That’s a decent number for a V6 powered unibody SUV and should be considered by anyone needing better-than-average towing capacity.

As with other Nissans, lighting controls are on the turn signal stalk left of the steering wheel, with automatic activation standard. Nissan has done a nice job incorporating LED headlights, slim daytime running lights and elongated LED taillights into the design, giving the exterior a fresh, modern appearance.

With the SL trim comes the four-camera Intelligent Around View Monitor system, which provides a 360-degree bird’s-eye view of your vehicle and surroundings. When parking, you can select a split screen between your car’s front, rear and the curb.

The new Pathfinder has excellent visibility most all the way around, the exception being in the rear when the third-row headrests are up. Automatic, rain-sensing wipers are standard and work well, as do the front and rear defrost features.

Nissan has packed the new Pathfinder full of standard safety features, thus furthering its compelling value proposition. Our tester was equipped with Nissan’s ProPILOT Assist, which basically acts as a driving aid. The system can adjust your speed to the flow of traffic and keep you centered in your lane. The Pathfinder feels safe and is a place you’ll be comfortable putting your family.

Nissan’s been ramping up their safety and driver assistance features, and it shows in the Pathfinder. Just a few of the features available on our tester:

Continuing Nissan’s hot streak of 5-star safety ratings, the 2022 Pathfinder picked up top marks from the National Highway Traffic Safety Administration and nearly all top scores from the Insurance Institute for Highway Safety. It was also awarded the Sobre Ruedas Best SUV award at the Miami International Auto Show for its large seating capacity, versatility and truck-like brawn. 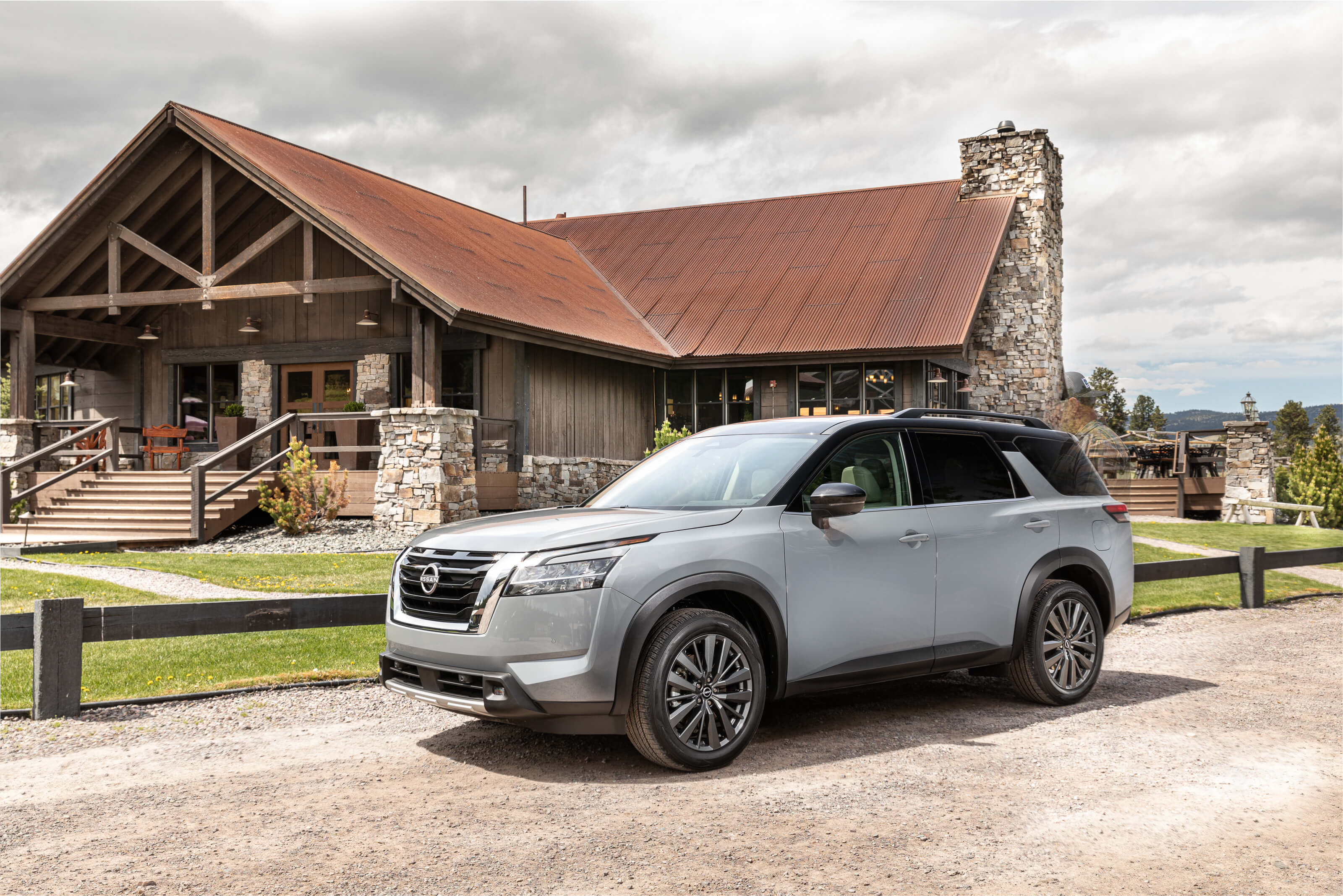 Nissan really went for it with the 2022 Pathfinder, and it shows inside and out. From the stylish and rugged exterior to the comfortable and feature-rich interior, there's a lot to like. In short, the redesign is the best model we’ve seen in a long time and absolutely should be on the shortlist of three-row SUVs to check out — especially if towing is on your needs list.

We would recommend the SL trim and springing for the $2,900 premium package that brings larger wheels, a panoramic sunroof, heated rear seats, a Bose stereo system and wireless charging.

The 2022 Nissan Pathfinder is great and is here to play with the big dogs. Find your new Pathfinder on KSL Cars today.

Can I go off-roading in the Pathfinder?

Sure, you technically can go off-road. However, the Pathfinder’s rugged looks betray its true off-road abilities, which aren’t much. If off-roading is what you’re into, you’ll probably want to spring for a dealer-installed lift kit and larger, more aggressive all-terrain tires before you venture too far off the beaten path.

Is the Pathfinder a good value?

The Pathfinder is priced slightly higher than some of its rivals and offers much of the same tech and comfort features. It does feel a little expensive for what it is, but those who opt for the SL and Premium packages should feel good about what they’re getting for their money.

About the author: Having owned everything from a DeLorean to an E46 BMW M3 to a Toyota Land Cruiser, Jason Bell is a lifelong car enthusiast who loves sharing his passions as a teacher, writer, speaker and social media manager. Contact him at jasonbellcars@gmail.com for comments/questions, or just to say "hi."