When Toyota dropped off the 2022 4Runner TRD Pro in its Lime Rush paint, I couldn’t have been more excited or curious about how it would perform. Afterall, the 4Runner has soldiered on largely unchanged since 2009 — an analog watch in an iPhone world. We drove the SUV for a week to find out if it’s as rugged and charming as we remembered. We found it to be a true reminder that sometimes the old ways are the best.

Quality doesn’t come cheap, especially in the TRD Pro trim. The MSRP range for the 2022 Toyota 4Runner is $38,105-$52,920. It is available in eight trims, with a suite of standard features that includes LED headlights, Android Auto and Apple CarPlay connectivity and a smart key system with push-button start. Some of the major differences in trim levels are noted below.

If you value reliable, old-school, body-on-frame truck dynamics without frills, you’ll love what the 4Runner has to offer. If it’s a modern, refined, feature-rich experience you want, look elsewhere. Toyota’s warranty is on par with the industry average, with a 3-year/36,000-mile limited warranty and a 5-year/60,000-mile powertrain warranty. Toyota also throws in complimentary maintenance for two years or 25,000 miles. 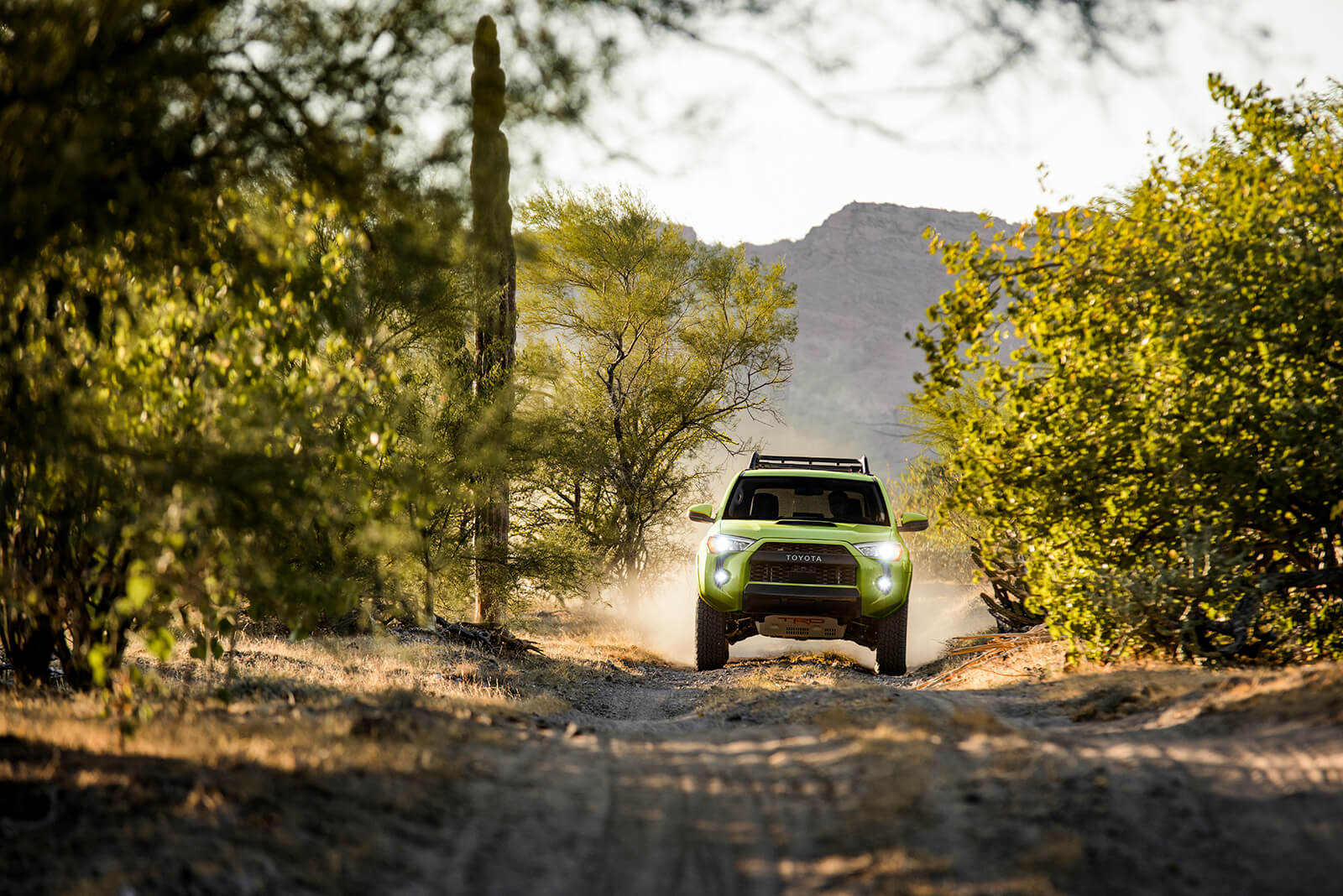 The 4Runner’s performance is a bit of a mixed bag. Its ancient engine and transmission plug along just fine, but they’re hardly modern feeling — which is part of the 4Runner’s appeal. Fast? No. Reliable and predictable? Absolutely. The TRD Pro 4Runner is an especially high performer off-road, proving it is still one of the best adventure vehicles on the market.

The engine powering every 4Runner since the early 2000s could be nicknamed Ol’ Reliable. The 4.0-liter V6 produces 270 horsepower and 278 pound-feet of torque. While we wouldn’t say the 4Runner is low on power, a supercharger would transform its on-road performance. The TRD Pro can’t tow your house, but it is a capable hauler for lighter items. It also produces quite a bit of noise. The roaring intake is something straight from 1999, but the TRD exhaust does a nice job of adding to the rugged mystique of this popular off-roader.

In an age of hybrids and high gas prices, the 4Runner lags behind the competition. The Environmental Protection Agency rates the TRD Pro 4Runner as 16 mpg in the city and 19 mpg on the highway. We experienced just over 18 mpg in our week of daily driving, slightly better than expected.

All 4Runners are powered by a traditional 5-speed automatic, and it feels great around town. It provides good power in most rpm and has an easygoing nature about it. We do wish for a slightly higher gearing ratio to aid in acceleration runs, but most drivers will find the 4Runner’s around town and off-road performance acceptable.

On the highway we experienced some gear hunting, sometimes making it difficult to get the power needed to maintain speeds or passing. Everything else in the SUV, all the off-road goodies, are the stuff of dreams. 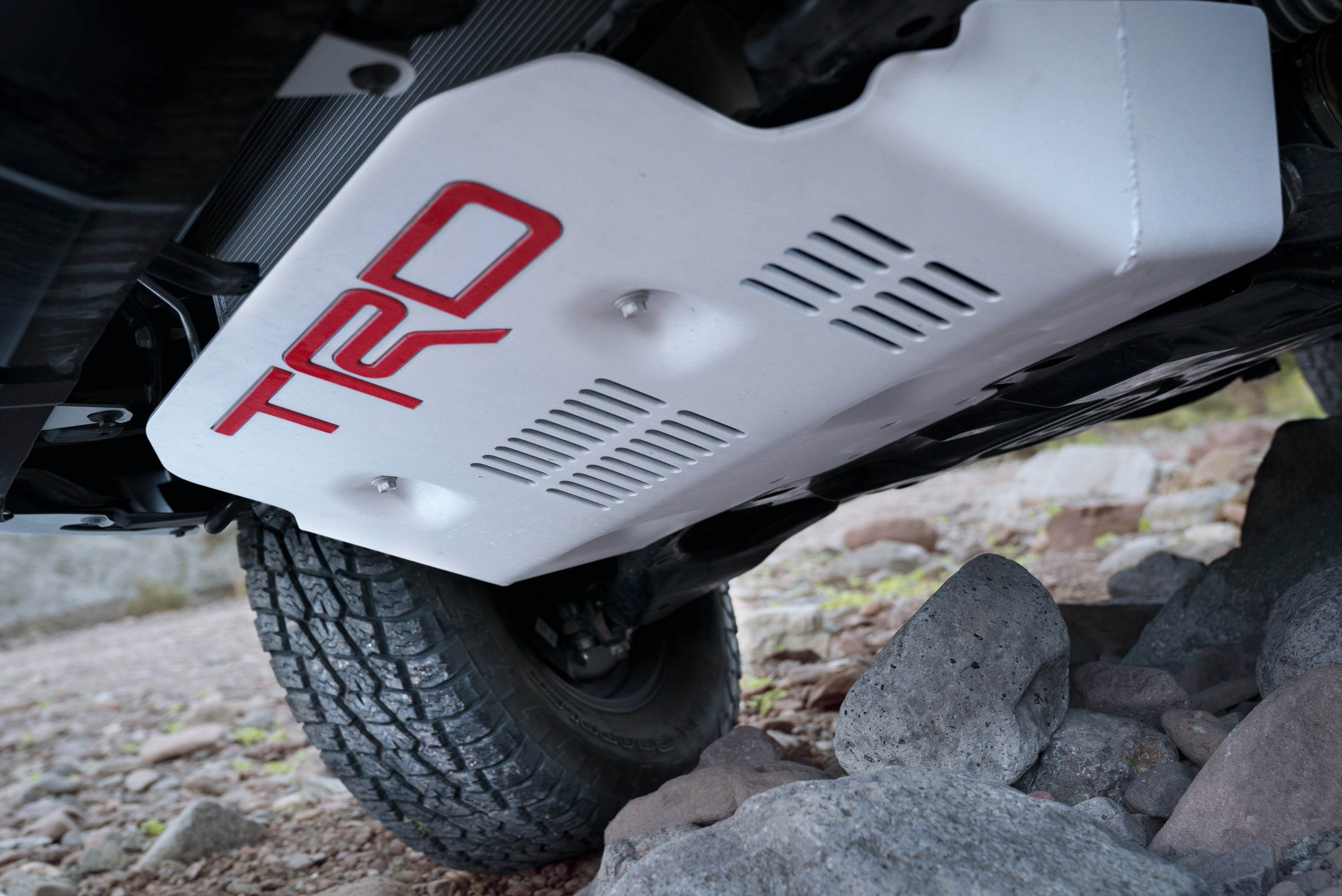 Acceleration in the TRD Pro 4Runner is a bit on the ponderous side, but it gets the job done. Car and Driver clocked this V6-powered beast at 7.7 seconds in its 0-60 mph test run. Handling is wallowing, with a loose steering rack and pillow soft Fox shocks. That’s not necessarily a bad thing, as it makes for a very comfortable and relaxed daily driving experience. 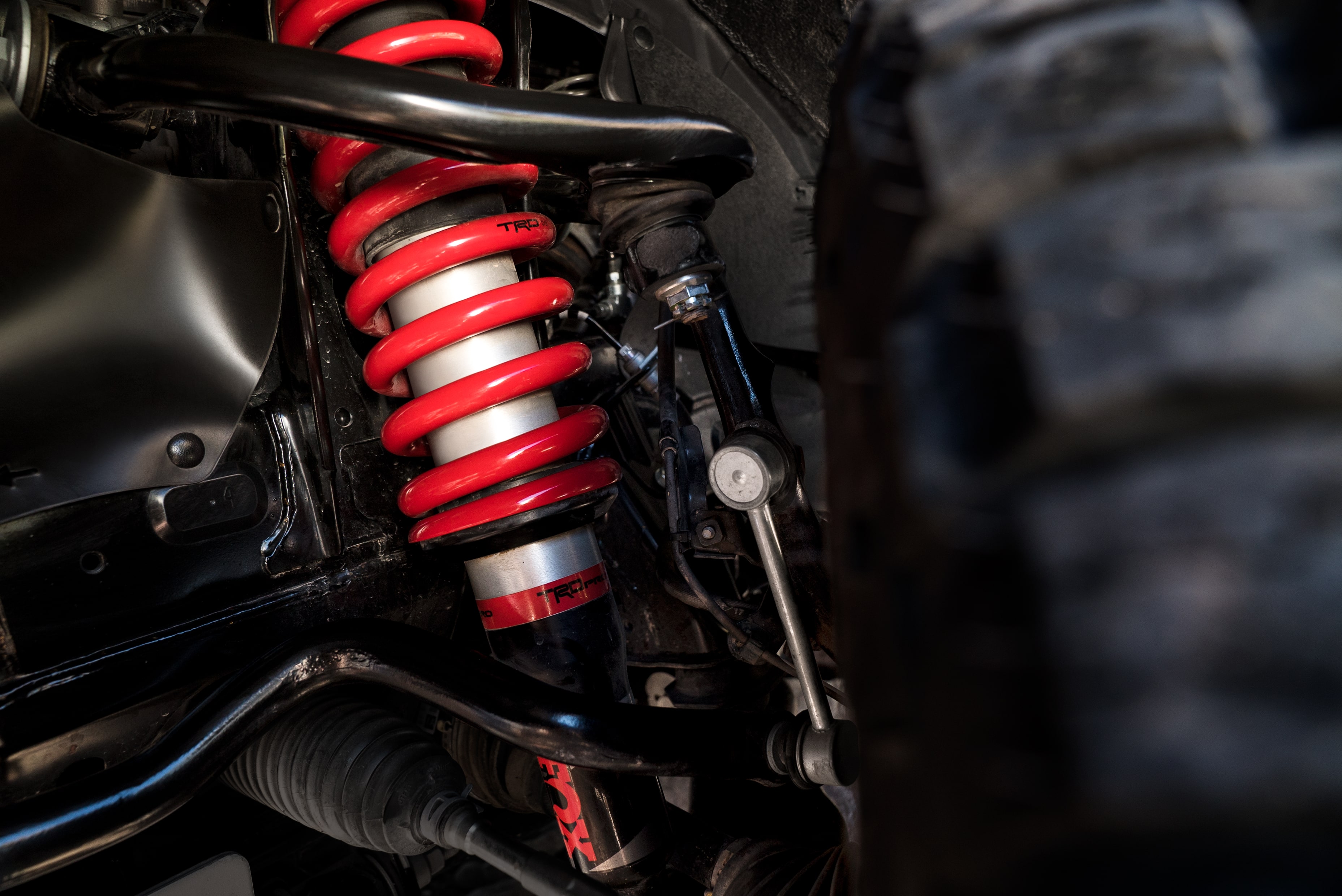 Braking in the 4Runner felt natural, progressive and not overly boosted. The vehicle does nose-dive a bit when braking due to the soft suspension. Every 4Runner is equipped with Toyota’s brake assist system, which provides additional brake pressure if the system detects panic braking.

The interior of the 4Runner is antiquated but very comfortable and spacious nonetheless. There’s an abundance of space for passengers and cargo alike, and there’s just enough modern tech to keep buyers happy. Though relatively spartan in its appearance and materials, the 4Runner’s interior is one we’d happily spend more time in.

All seats in the 4Runner are comfortable and soft, but even $53,000 doesn’t buy you real leather. Toyota has outfitted the TRD Pro with their synthetic SofTex material. It’s easy to clean, looks nice and feels durable, but it gets hot, especially during spirited or off-road driving. We wish the seats were at least perforated, if not ventilated. The rear seats are also comfortable and spacious — plenty of room for adults and child car seats alike. Rear seat vents help keep things cool. 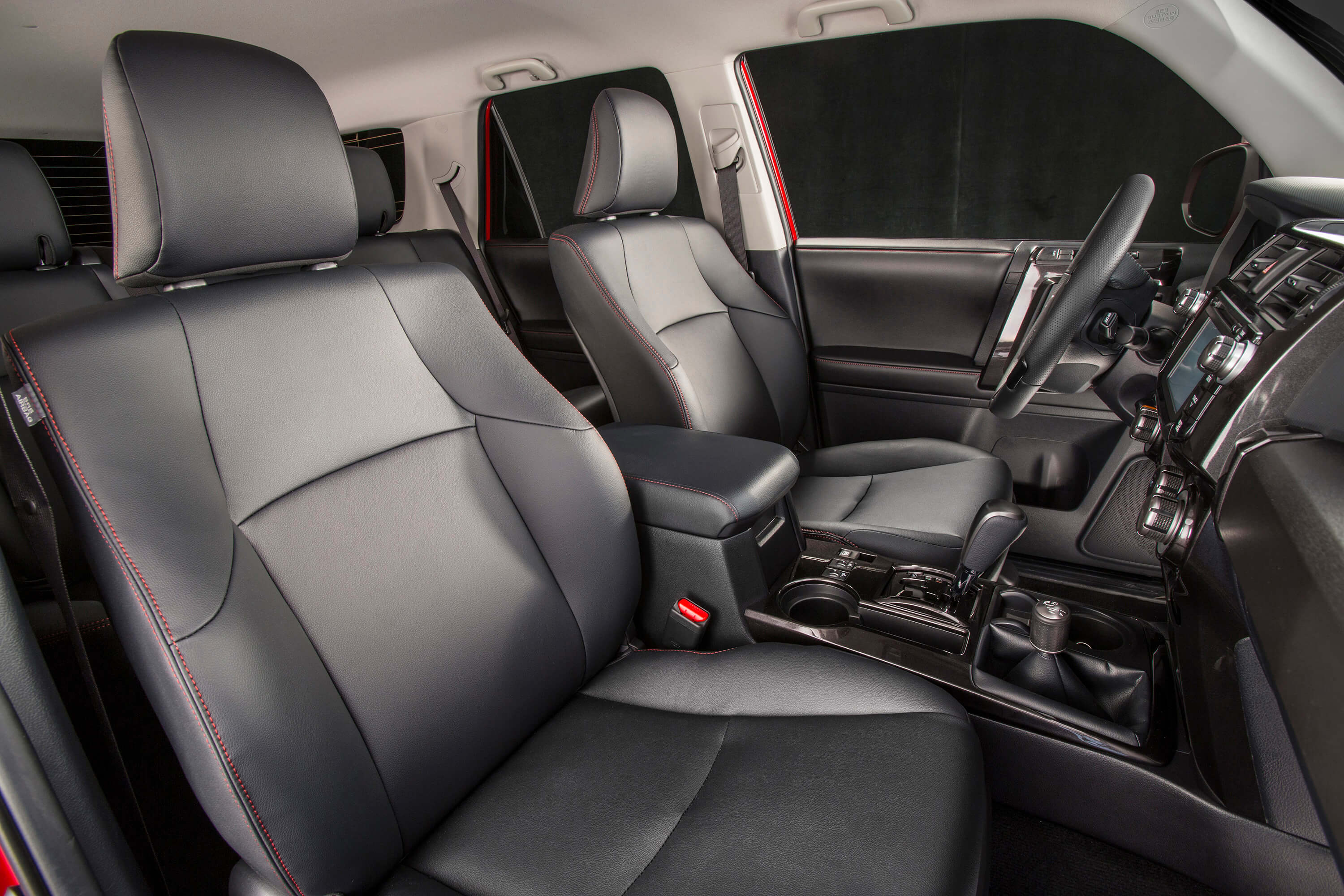 We tested the 4Runner in the heat of the summer and appreciated the dual-zone automatic climate control’s cooling abilities. Your back will still get sweaty, though. The fan is fairly loud, but the extra-large dials and buttons are easy to use and get the job done. 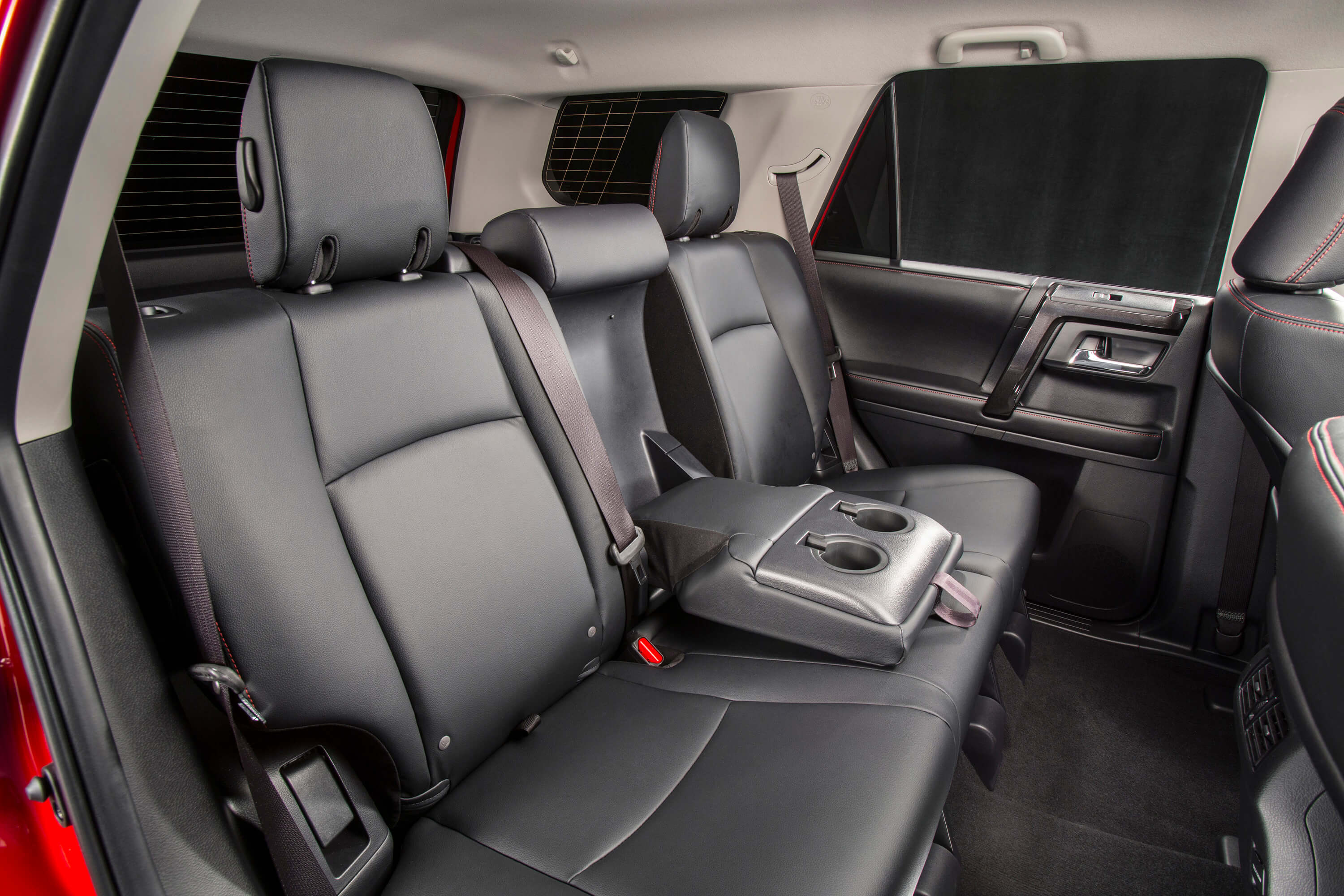 The 4Runner’s cargo space is impressive. There’s plenty of room for all your gear and then some, especially with the second-row seats folded down. There are also several large, deep cubbies in the front row for all your favorite snacks, sunglasses and other sundries. 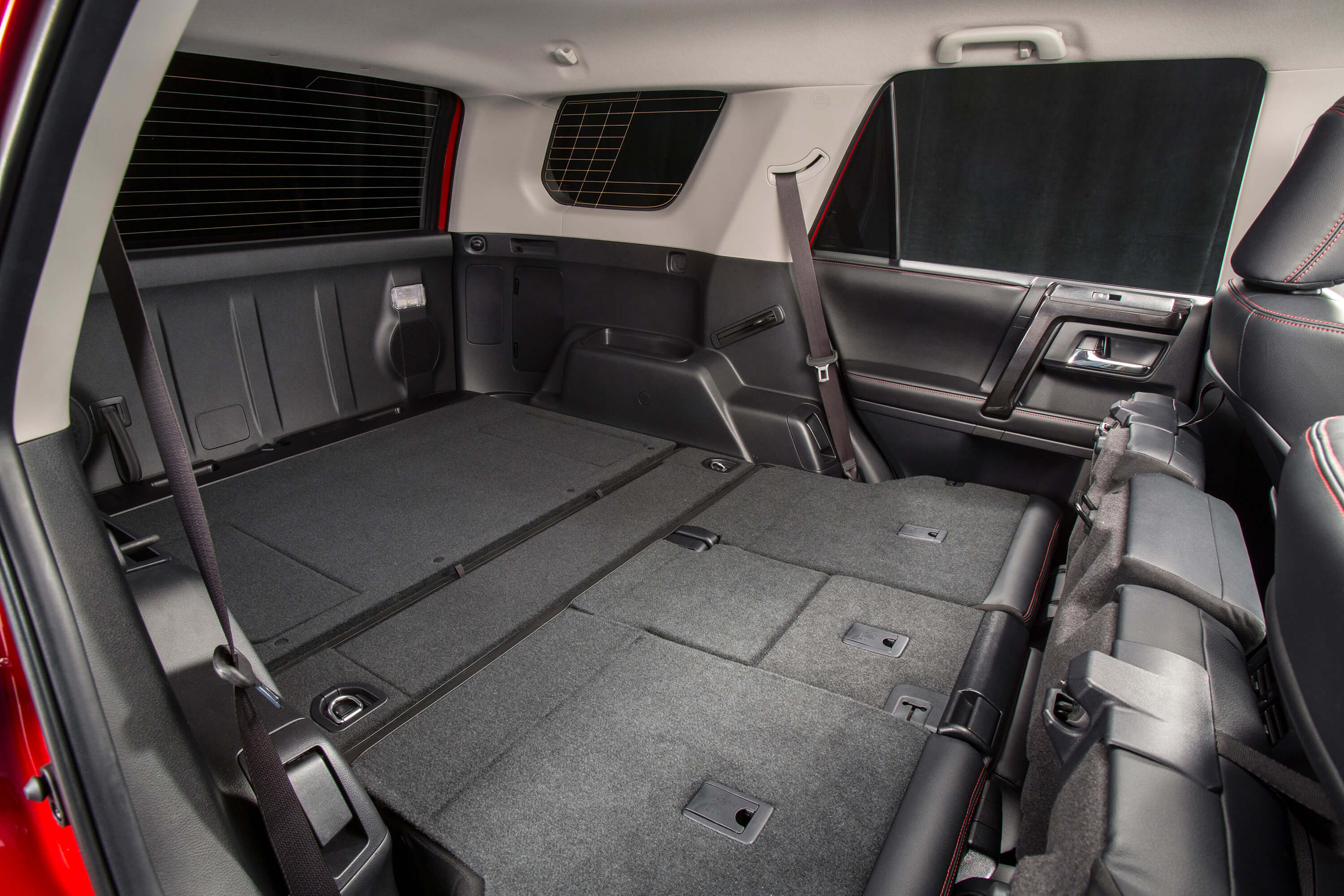 We’re fans of Toyota’s easy to use infotainment systems. Our tester had an 8-inch touchscreen, 15-speaker JBL stereo, Apple CarPlay and Android Auto. The low resolution of the cameras was a letdown, especially for off-roading and spotting obstacles.

We can’t deny it — we were very drawn to the TRD Pro 4Runner’s rugged appearance. It looks tough, fun and athletic, ready to go anywhere at a moment’s notice. The TRD Pro trim amps up that appearance in tasteful ways, including a 1-inch front lift, black TRD wheels, aggressive all-terrain tires, a roof basket, a uniquely retro blacked-out front grille, a front skid plate with red TRD lettering and exclusive paint options. Besides the Lime Rust paint of our tester, the TRD Pro trim comes in White, Magnetic Gray Metallic and Midnight Black Metallic.

Towing capacity for the 4Runner isn’t great, and it's probably best left for lighter loads. The 4Runner is rated to tow up to 5,000 pounds and the payload is capped at 1,700 pounds.

The TRD Pro 4Runner has rugged 17-inch black wheels shod with aggressive 33-inch 265/70R-17 Nitto Terra Grappler all-terrain tires. While the tread on the tires is certainly knobby, we did not notice much road noise coming from them while in daily use. They provided good grip off-road. 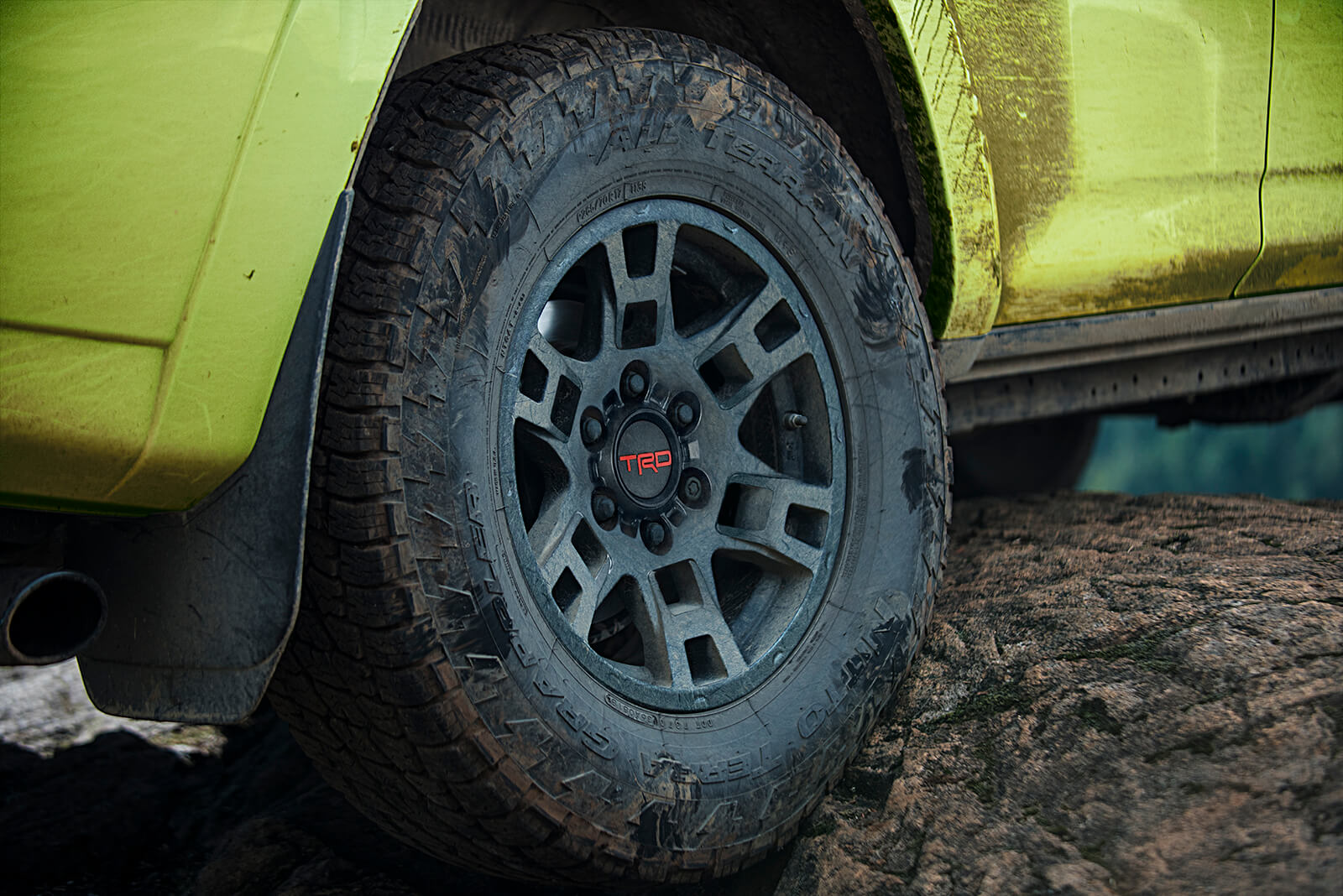 The LED headlights and foglights on the TRD Pro 4Runner worked well and gave off ample luminescence for night driving. The automatic headlights worked great here, too. The taillights and signals boast a rugged, unique design and look sharp when illuminated.

Our tester was equipped with several cameras, including a 360-degree and an off-road one. Both provided helpful exterior shot angles, but we were disappointed in their low resolution. The side mirrors are large, making it easy to see the sides and rear of the SUV.

The 4Runner’s front windshield is surprisingly narrow, but it provided excellent visibility. The hood scoop isn’t functional, and you can see over it just fine. The rear windshield is massive and easy to see out of. Plus, it rolls down — a cool feature that your furry friends will especially appreciate. It was not cold enough to test the defrost features.

Every 4Runner receives Toyota’s suite of safety technology, such as automatic emergency braking and dynamic radar cruise control. We like Toyota’s safety features. They do a nice job of making the 4Runner feel secure on- and off-road, a sensation verified by good crash test ratings.

Toyota’s Safety Sense comes standard with a host of modern features, including:

The National Highway Traffic Safety Administration awarded the 2022 Toyota 4Runner an overall safety rating of four out of five stars. The Insurance Institute for Highway Safety rated the 2021 Tacoma as Good in four of their five crash safety tests. The current generation of 4Runner has been awarded several Best Resale Value awards from Kelley Blue Book. 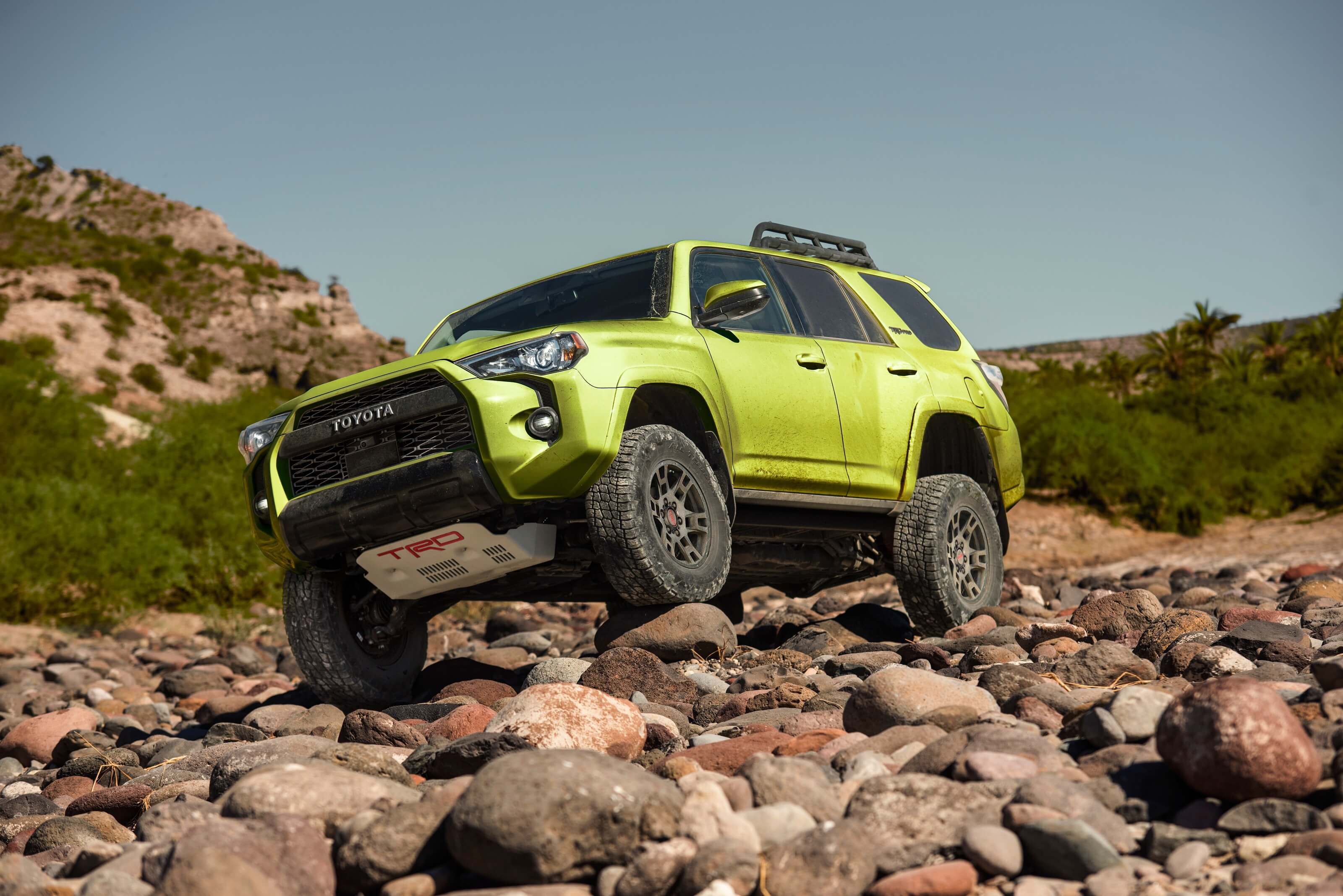 In a world of high-tech digital experiences, the 2022 Toyota 4Runner TRD Pro feels dated in nearly every way. But it is so simple and analog, we couldn’t help but be charmed by its ‘90s attitude in a lime suit. It’s not particularly efficient, fast or thrilling, but it is a joy to drive. And it’s quite capable once the asphalt turns to dirt. If you’re looking for a rugged, adventure-ready SUV that’s likely to last, the TRD Pro 4Runner is tough to beat.

The 4Runner’s trim level lineup is lengthy, but we recommend the TRD Pro to get the most modern tech, comfort and rock crawling features. It is the most expensive, but knowing you could tackle any adventure at any time is worth the monthly payment.

Whether you’re looking for a new or previously owned, you can find your Toyota 4Runner on KSL Cars.

Is the TRD Pro 4Runner fun to drive?

Yes and no. It’s not fast or particularly adept in its handling, so there won’t be any high-speed thrills. However, the 4Runner is fun to drive because of its charming attitude and ability to make the driver feel more rugged and cool than they actually are.

Is the TRD Pro 4Runner good for families?

Absolutely — as long as you aren’t concerned about fuel economy. The 4Runner is spacious enough for all your kid’s gear and groceries. Plus, the cabin materials are durable and easy to clean. As a rugged off-road family hauler, the 4Runner is an excellent choice.