Here’s a life lesson for you: Do not say anything negative about a Toyota Tacoma to a Tacoma fan. During our week driving the Tacoma TRD Pro, I innocently commented to a Toyota fan about a desire for more power, which was quickly rebutted with a series of statements about how the Tacoma doesn’t suffer from a power problem, it’s a gearing issue, if you need more power you don’t know what you’re doing, etc. Ok, got it. Like a bear protecting her cubs, I had overstepped and quickly learned my lesson.

Toyota has brought back the Tacoma for its seventh year of the N300 generation, making it the oldest platform in its class. The Electric Lime Metallic TRD Pro tester we had is the tip-top of the Tacoma trims, complete with TRD-tuned Fox shocks, skid plates, Rigid Industries fog lights and more. Despite its age, the Tacoma is selling better than ever and the TRD Pro trim is especially appealing for its off-road readiness right from the factory.

This midsize pickup truck is no doubt impressive in its capability, but does it earn its legendary status? Let’s find out.

Interested in a Toyota Tacoma? Check it out on KSL Cars. 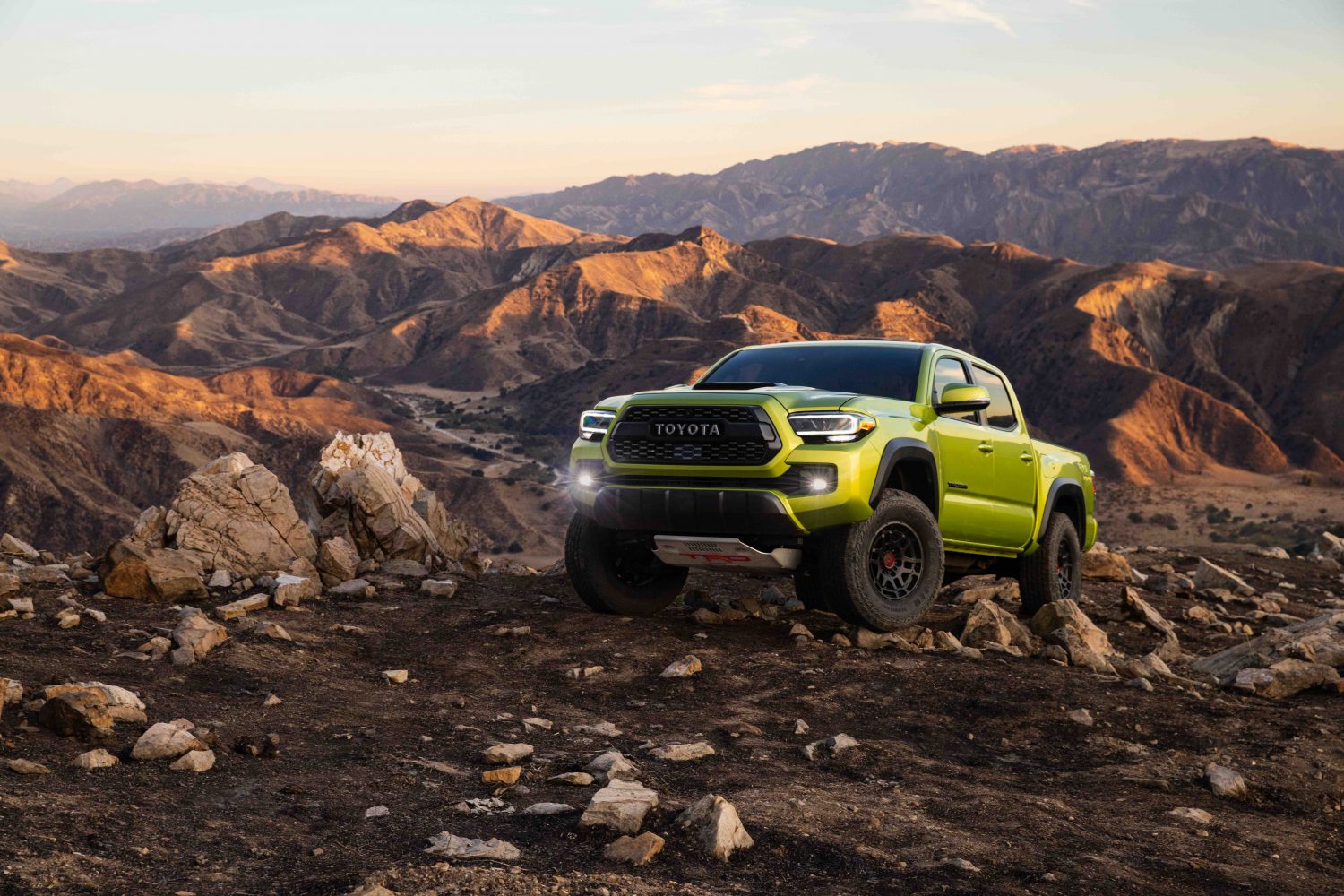 The MSRP range for the 2022 Toyota Tacoma is $27,150-$46,585. It is available in six trim levels, with a suite of standard features that includes projector beam headlights, a deck rail system and dual-zone automatic climate control. Some of the major differences in trim levels are noted below.

Any Tacoma fan would tell you that it's an excellent value based on reliability alone. Reliability reputation aside, the TRD Pro is a great value, especially if you want a highly capable, off-road, desert running, rock-crawling truck from the factory.

Toyota’s warranty is on par with the industry average, with a 3-year/36,000-mile limited warranty and a 5-year/60,000-mile powertrain warranty.

Let’s get this out of the way: in its natural habitat (off-road) the Tacoma TRD Pro’s performance is exceptional. Its upgraded shocks, forged upper control arms, lift kit and other off-road features make it adventure ready from the factory floor. On-road, the TRD Pro is a bit of a mixed bag. While the tried-and-true engine soldiers on with its six-speed transmission, we questioned how well-suited this off-roader is for daily use. 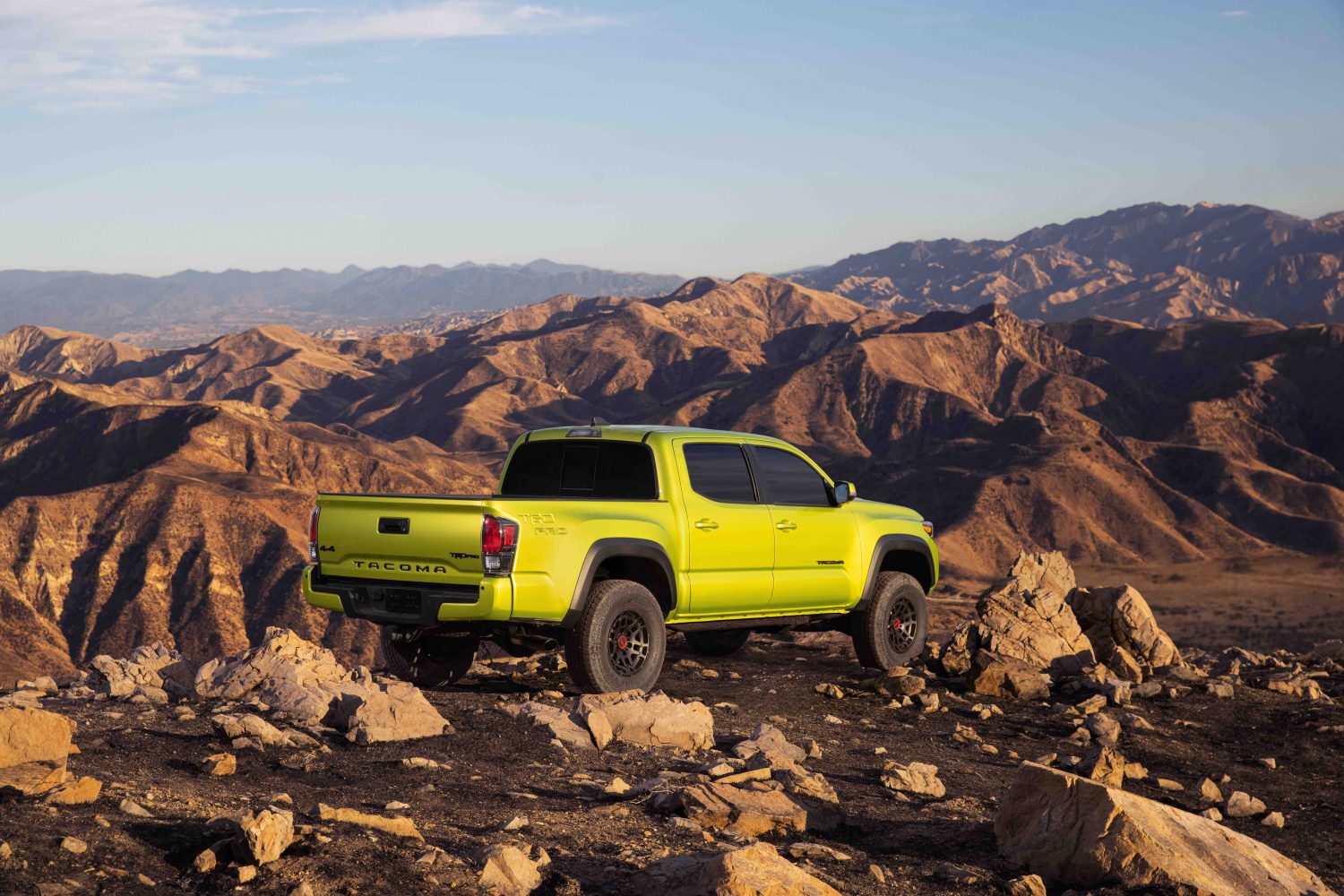 Toyota’s 3.5-liter V6 is well regarded in the off-road community for its reliability and decent power on the trails. It produces 278 horsepower and 265 pound-feet of torque. While the power is adequate, we long for the days when TRD offered a factory supercharger. A little more oomph would make the TRD Pro a hoot to drive, and even more capable on- and off-road. But it got the job done and sounded good with the TRD exhaust system. 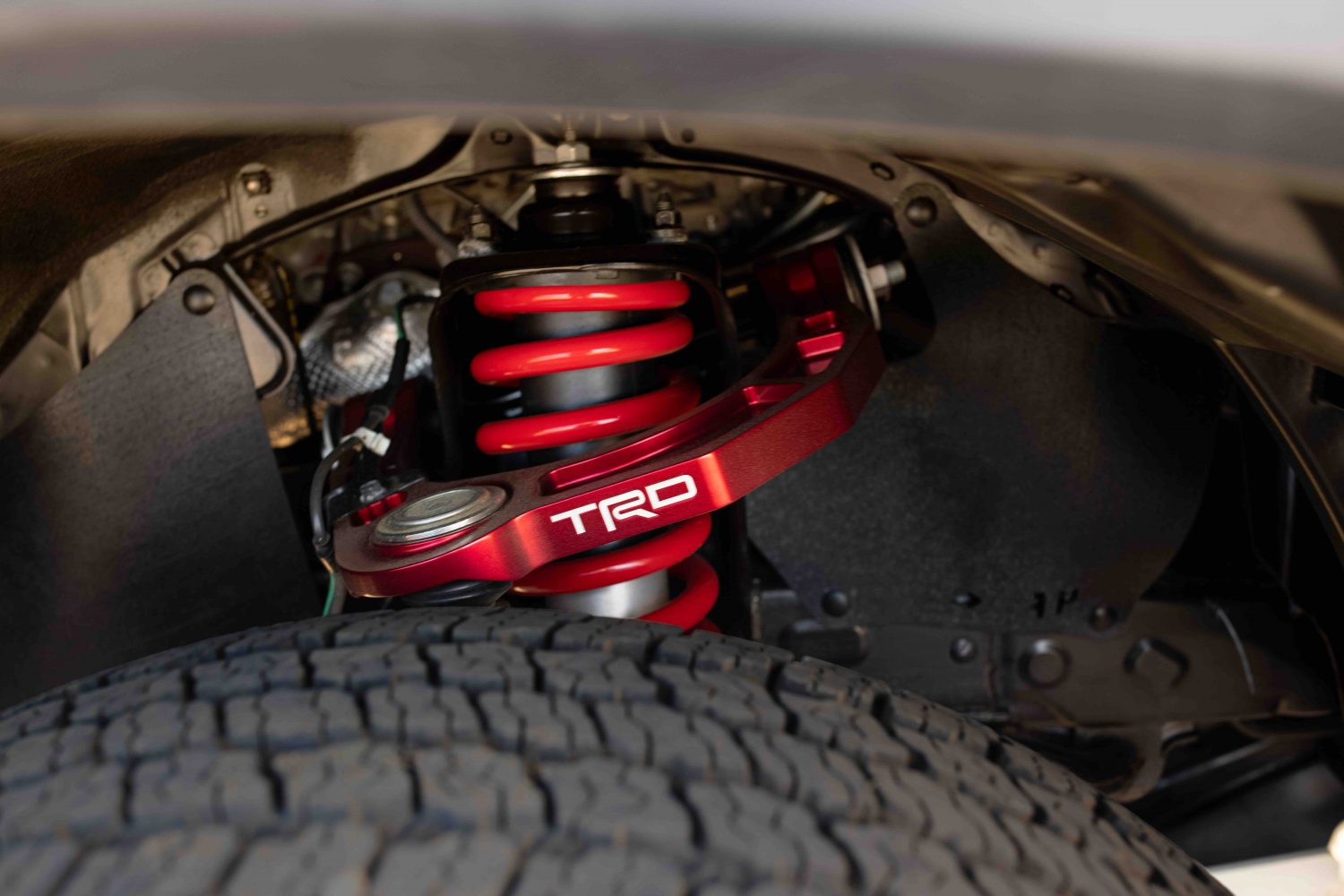 For a truck as old as this is, we were surprised by the Tacoma’s fuel economy. The Environmental Protection Agency rates the TRD Pro Tacoma as 18 mpg in the city and 22 mpg on the highway. We experienced just over 21 mpg in our week of daily driving and commuting, much better than expected.

The six-speed automatic transmission, combined with the lower power output of the V6 engine, was a frustrating experience in daily driving. The engine and transmission duo are manic and lazy in their efforts to find power and keep the RPMs low. As a result, the truck felt woefully underpowered, especially on the freeway or going up an incline. An eight- or 10-speed transmission, along with a more aggressive gearing ratio, would work wonders here. That said, the four-wheel-drive system, locking rear differential, two-speed transfer case and Toyota’s Crawl Control worked wonders off the beaten path.

Accelerating in the Tacoma is … uneventful. Motor Trend clocked its run to 60 mph in 9.21 seconds. Where acceleration is lacking, the Tacoma makes up for in handling. On- and off-road, the Tacoma handles very well, with little body roll and a precise and direct steering feel.

Braking in the Tacoma proved extremely sensitive and difficult to modulate. Under light and hard braking, we found the brake pedal to be pretty touchy and took several days to get used to. We didn’t have a chance to test out Crawl Control, but we’ve heard that it works marvelously as it applies braking to each wheel. 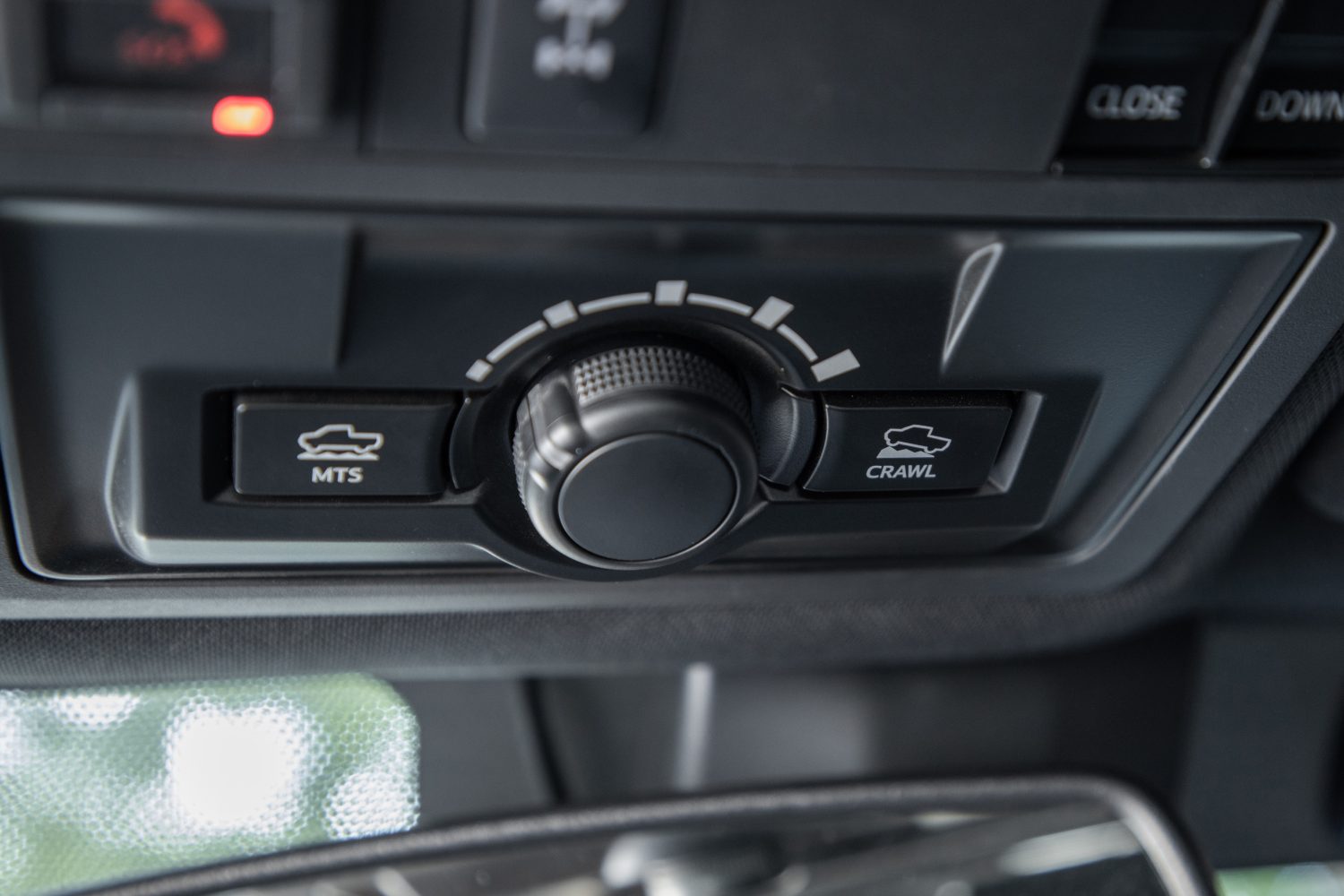 The Tacoma’s interior is functional, if a bit dated. It’s a comfortable, although some might find the low seating position and shallow legroom for long-legged drivers uncomfortable. The Tacoma’s interior works in matching its mission as an off-roader first, people transporter second, but it could stand for a refresh.

The seats in the Tacoma are soft-cushioned seats that are comfortable and relatively supportive. We were surprised that the front seat material is real leather. The rear seat comfort is about what you’d expect for a midsize truck and is relegated to vinyl upholstery only.

Some drivers might find the seating position uncomfortable, especially for long drives. It’s low and close to the floor. While it didn’t bother me, if you’re someone expecting a more upright seating position, you might be disappointed. Regardless of your preference, the seats were comfortable and heated up nicely on cold mornings. 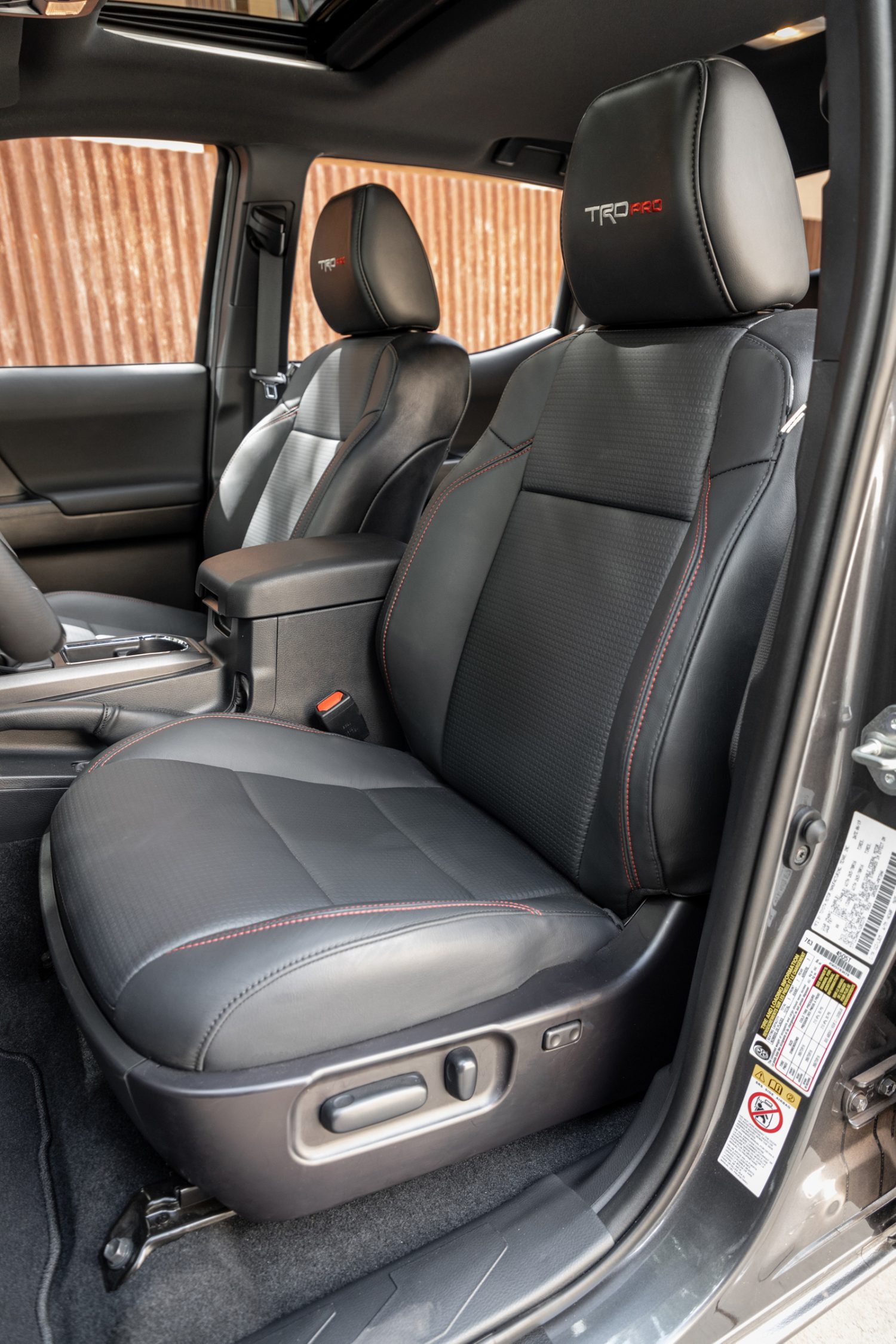 The Tacoma’s dash is uncomplicated with extra-large knobs and buttons, making climate control functionality a breeze. Dual-zone automotive climate control is standard on the TRD Pro. The cabin did take a little longer than usual to cool down on hot days, and the lack of perforated leather compounds the heating issue for sweaty backs. 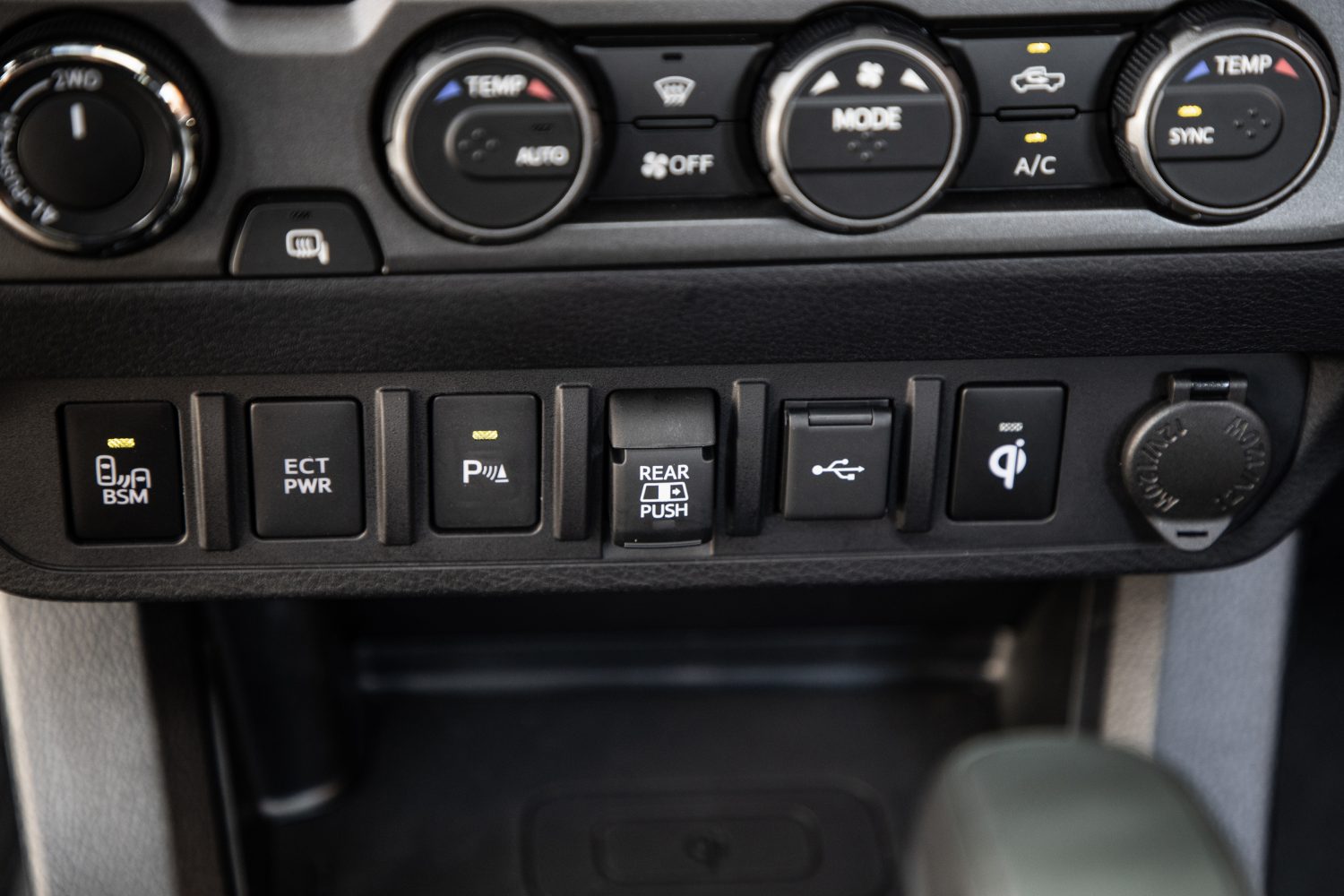 There aren’t a lot of small cubbies and storage areas in the Tacoma. There is some under the rear seat, and a decently sized center console, but other than some small cubbies on the doors and near the gear selector, storage is sparse.

We’re big fans of Toyota’s easy-to-use infotainment systems. Our tester had an 8-inch touchscreen, six-speaker JBL stereo, Apple CarPlay and Android Auto compatibility. We weren’t thrilled by the camera’s resolution and wished it was better, especially for hitting the trails. 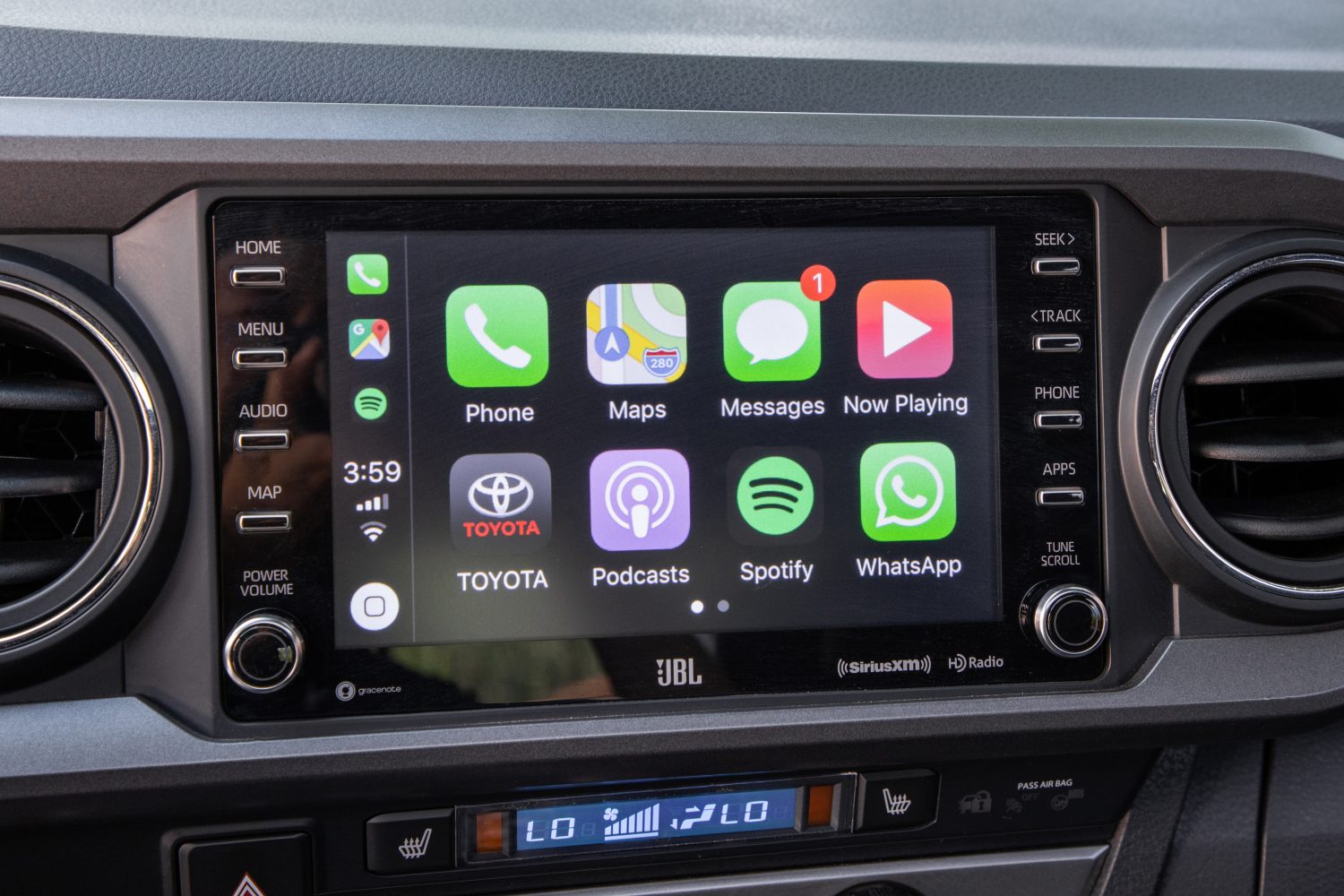 The Tacoma hasn’t changed a lot over the last eight years, but that’s not necessarily a bad thing. The Tacoma still looks great and gives off a serious and athletic off-road vibe. Toyota has nailed the ethos of the off-road culture this truck represents with its high ground clearance, knobby tires, lift kit, bright green paint, bed stamped TRD Pro logo and red-painted forged control arms. Drive this and people will assume you’re way more adventurous than you probably are. 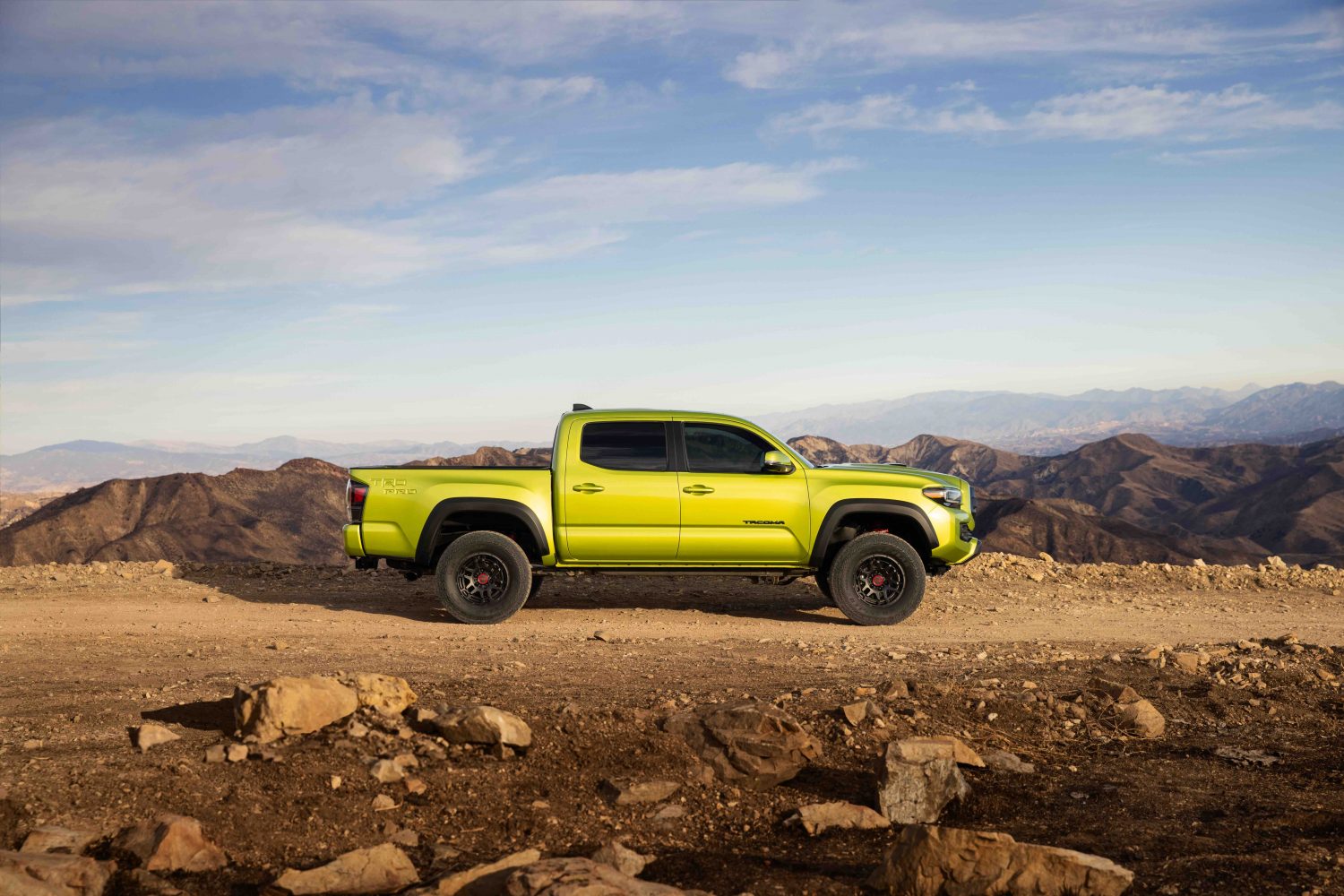 The 5-foot bed is the perfect size for this truck. A composite bed liner comes standard, with a removable tailgate and bed rail system with tie-downs. There are no fold-down steps for getting in, but that’s nothing a running start can’t fix.

The TRD Pro Tacoma gets a slightly lower payload and towing rating than other trims, due to its pillow-soft Fox suspension. Payload is maxed out at 1,155 pounds and towing capacity is limited to 6,400 pounds. Toyota includes an engine oil cooler and trailer sway control to help with towing.

As part of the TRD Pro trim you get 16-inch TRD black alloy wheels shod with gnarly 265/70 R16 Goodyear Wrangler Territory AT tires. Road noise was low for how knobby the tires were and provided excellent traction on and off the pavement. 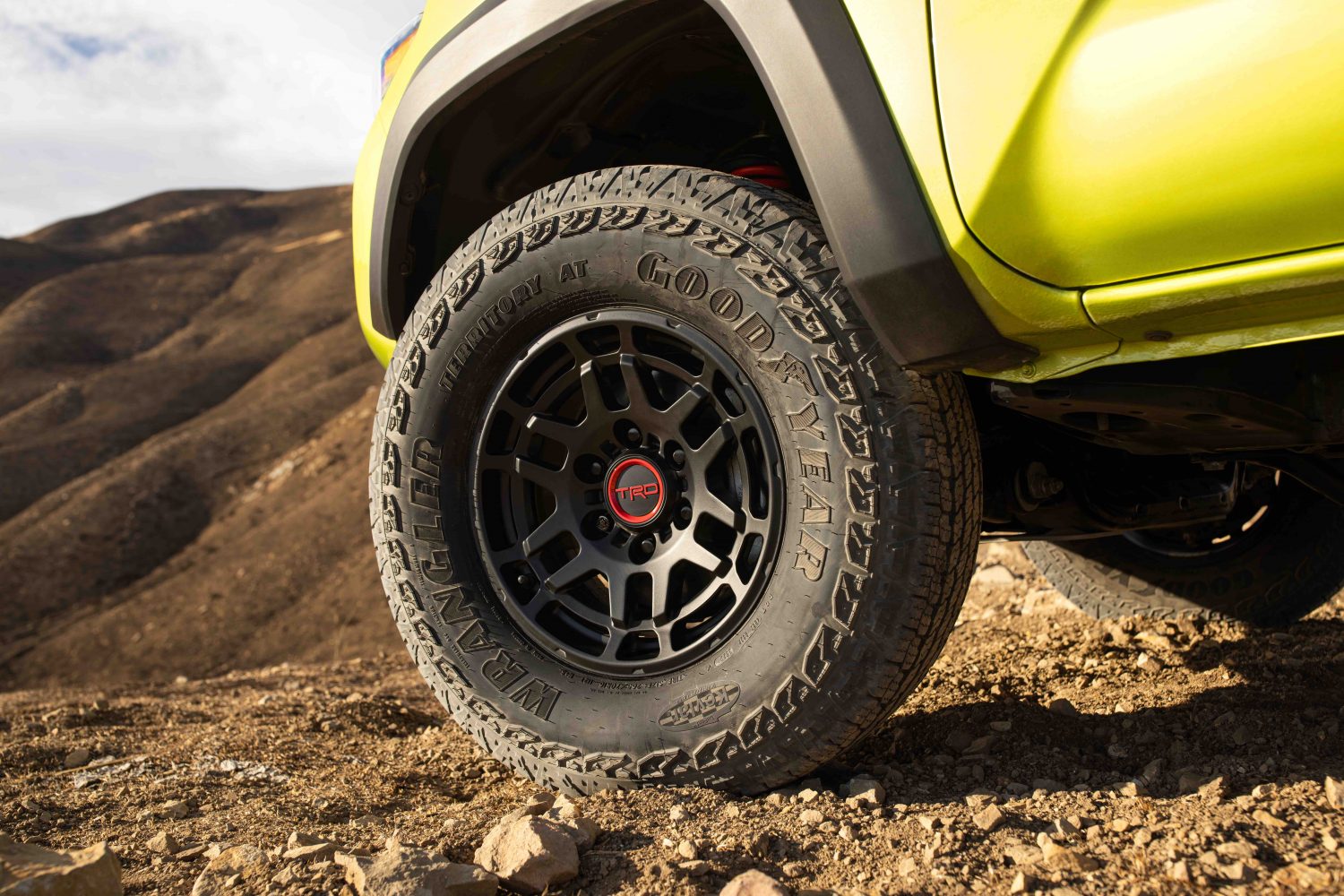 The LED headlights and foglights on the TRD Pro Tacoma worked well and gave off ample luminescence at night. Automatic headlights are always a nice feature to have, and they worked great here, too. There’s even an easter egg in each of the headlight housings, reading “TRD” on the passenger side and “PRO” on the driver’s side.

Our tester was equipped with a 360-degree camera that came in especially handy off-road. The resolution is low, however, so dust on the lens will make it difficult to clearly see the trail details surrounding you. The side mirrors were well-positioned and offered a clear view down the sides and to the rear of the truck. 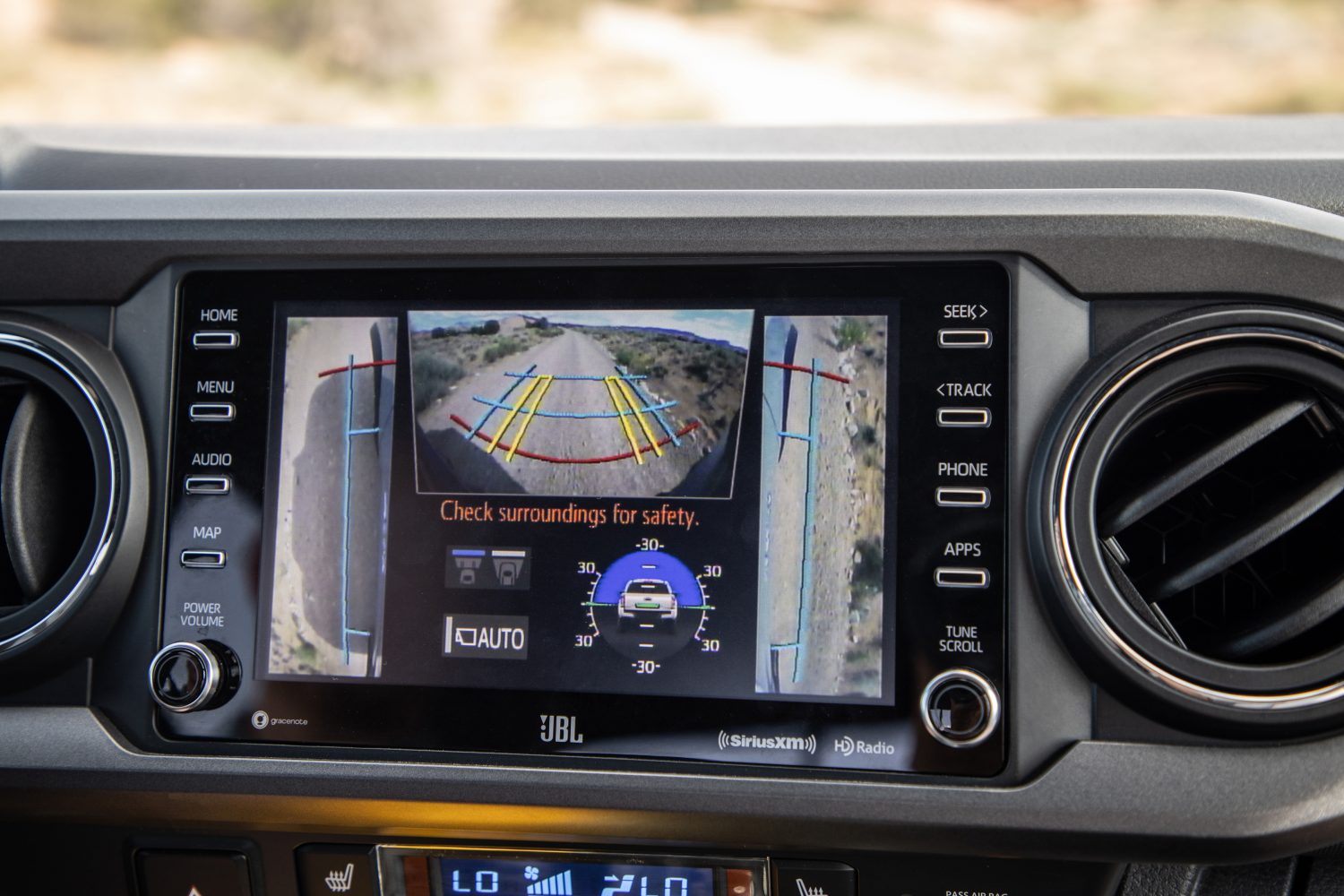 The TRD Pro’s “power dome” hood may look cool on the outside, but made frontward visibility a bit challenging. The hood scoop isn’t functional, so we’d prefer a flatter hood to look over. Otherwise, the front and rear windshields provide decent visibility. It was not cold enough to test the defrost features.

Every Tacoma receives Toyota’s suite of advanced driver-assistance technology, such as automatic emergency braking and adaptive cruise control. We like Toyota’s safety features, and they do a nice job at making Tacoma one of the safest midsize trucks on the market.

Toyota’s safety sense comes standard with a host of modern features, including:

The National Highway Traffic Safety Administration awarded the 2022 Toyota Tacoma an overall safety rating of four out of five stars. The Insurance Institute for Highway Safety rated the 2021 Tacoma as Good in five of their six crash safety tests.

The current generation of Tacoma has been awarded numerous awards, including a Best Buy award, 5-Year Cost to Own award, Best Resale Value in its Class award and a Top 10 cars with the Best Resale Value award, all from Kelley Blue Book’s KBB.com. 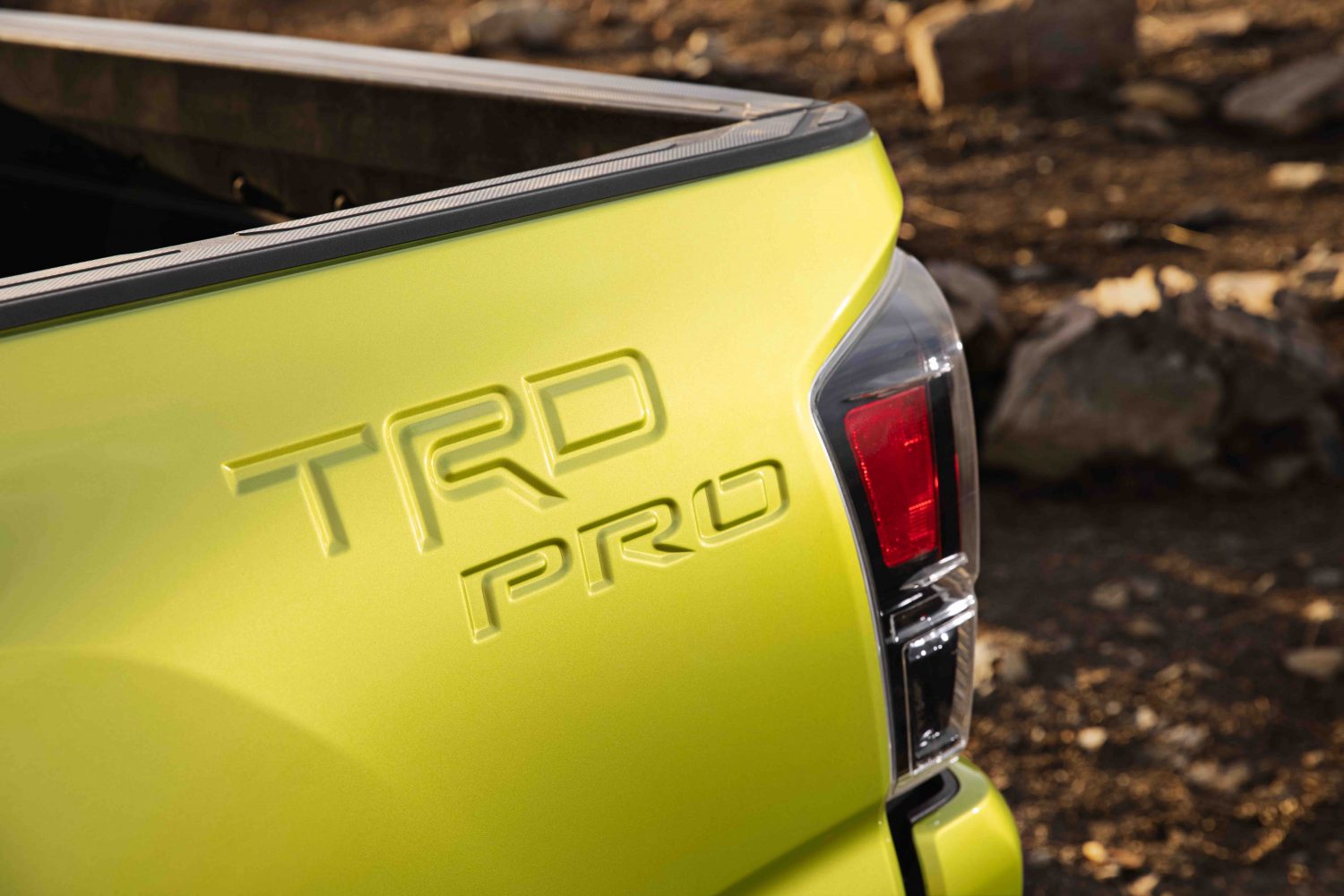 The Toyota Tacoma TRD Pro is a bit of a mixed bag. It’s amazingly capable, rugged, attractive and reliable, but it’s also let down by wonky gearing, an underpowered engine and six-speed transmission. That said, the TRD Pro is undeniably impressive and deserves the dedicated following it has amassed over the years. It proves that Toyota still makes some of the best trucks that are ready for anything from day one. We really enjoyed the Tacoma TRD Pro and would recommend going for the TRD Pro trim if off-roading is something you plan on doing, even occasionally.

Is the Tacoma redesigned for 2022?

The short answer is no. Toyota did a mild refresh of the Tacoma in 2020, and each year has updated the truck with new features. The 2022 Tacoma TRD Pro has some new styling features like Electric Lime paint and the TRD Pro insignia stamped into the bed.

Is the Tacoma fun to drive?

Whether the Tacoma is fun to drive or not will depend on what you think is fun. The Tacoma rides well on pavement and is decently comfortable, but it’s not especially quick or responsive. Off-road is where the real fun is to be had in the Tacoma TRD Pro.

Curious if a Toyota Tacoma is right for you? Check out KSL Cars for all the options now available.