The long awaited Z is fast, but its comfort might leave some dead in their tracks.
Jason Bell
August 31, 2022
Car Review

We’ve had the privilege of spending a lot of time with the 2023 Nissan Z Performance. At the one-day test driving event in Colorado in May, we walked away impressed — especially with the engine and its power delivery. Hiroshi Tamura, chief global product specialist, said he sought to create the perfect dance partner and not a spec sheet conqueror. Dance she does. But in our week of real-world driving, we aren’t so sure she’s the best fit. 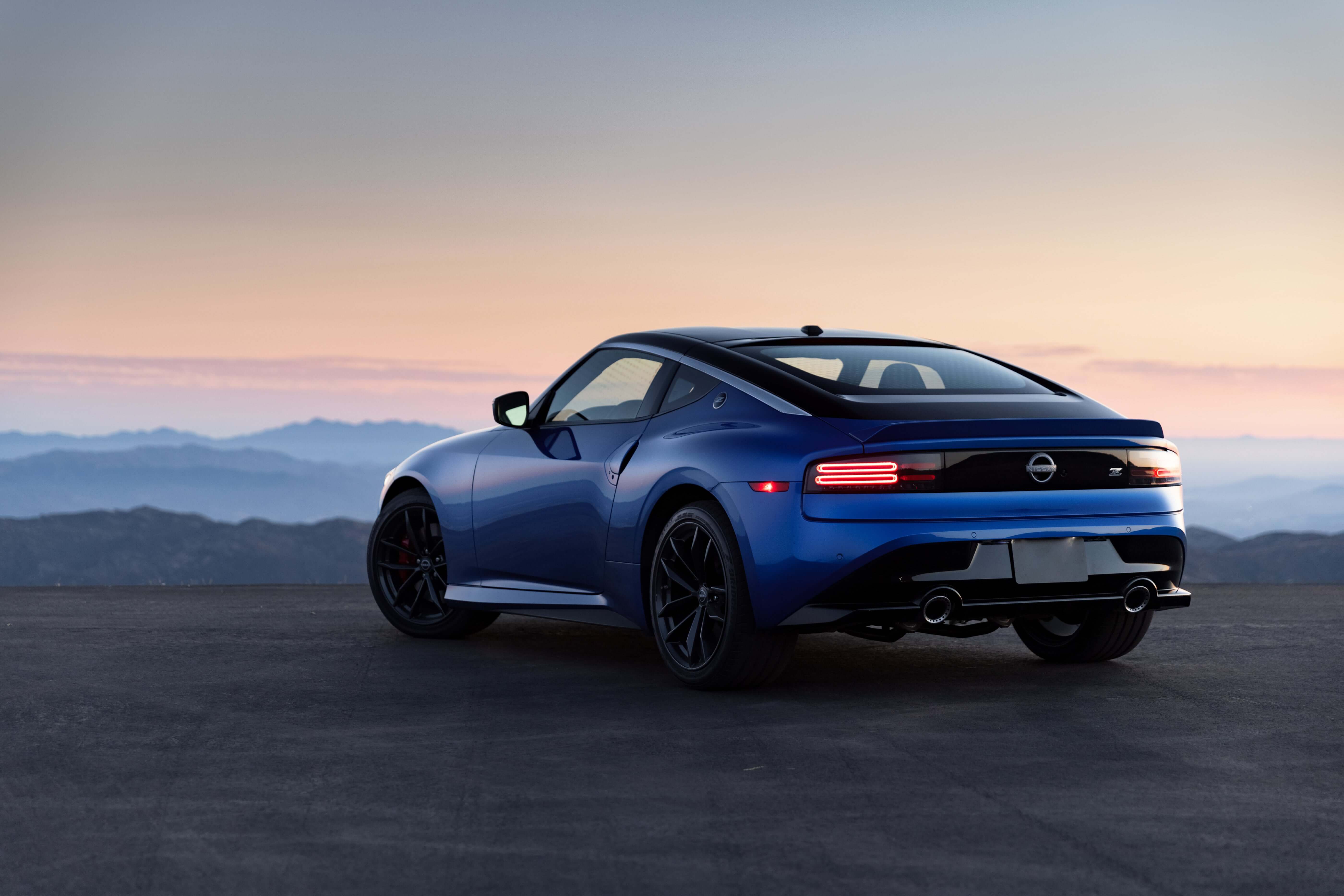 The price for the 2023 Nissan Z is slightly below its closest competitors, but drivers wanting a limited-slip differential will have to spring for the Performance trim. The MSRP range is $41,015-$54,015. It is available in three trim levels, with a suite of standard features that includes a 6-speed manual or 9-speed automatic transmission, a 400-horsepower twin-turbo V6 and rear-wheel drive. Some of the major differences in trim levels are noted below.

Generally speaking, the new Z is competitively priced. The jump to the Performance trim is significant, but it’s probably preferable given the limited-slip differential, Rays forged wheels and upgraded brakes. However, the appeal of the Sport trim is undeniable, offering a smattering of standard features plus 400 horsepower for just over $40,000. 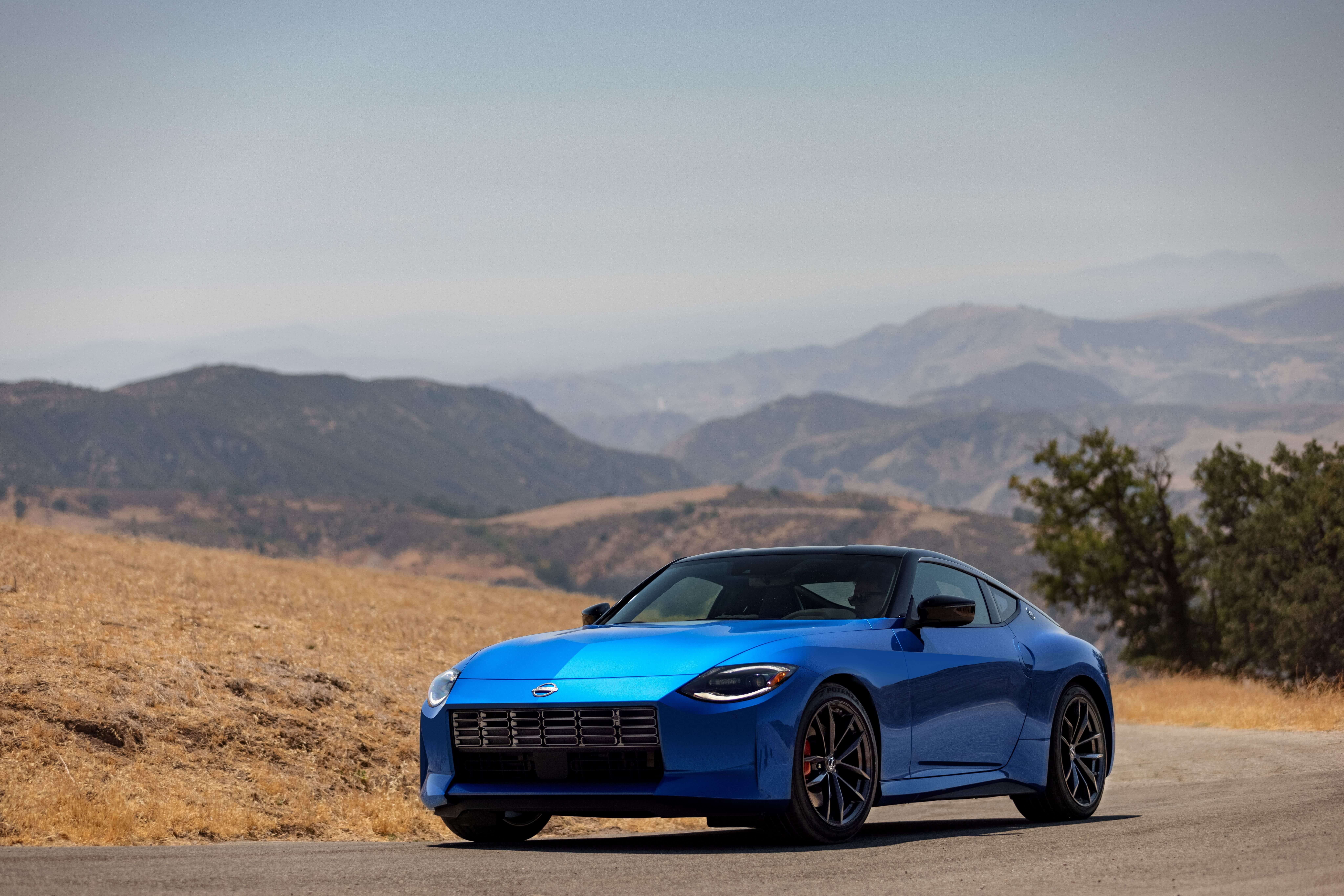 The characteristics of the Z are somewhat conflicting. It’s blisteringly fast, especially in a straight line, but it’s also heavy — 200 pounds more than the outgoing 370 Z. Its suspension is great for daily driving, but it can wallow when pushed hard. The Performance trim and its upgraded suspension, brakes and limited-slip differential do their best to keep tabs on the heft. But in the end, it felt most at home charging up a canyon — ideally one without too many sharp turns. In short, if all-out speed is your objective, you’ll find a lot to love here, especially while rowing through the easy-to-use manual transmission.

The Z is powered by a well-known Nissan/Infiniti stablemate — the 3.0-liter twin-turbo V6 power plant transplanted from the Infiniti Q60 Red Sport. The engine positively rips, especially from 4,000 rpm on through the rev band. The immense power of the Z’s motor mostly does well masking its heft, and it will have you cackling every time you mash the throttle. Those 400 horses sound good, too — especially with the automatic Z, which gets a freer flowing exhaust system than the manual. 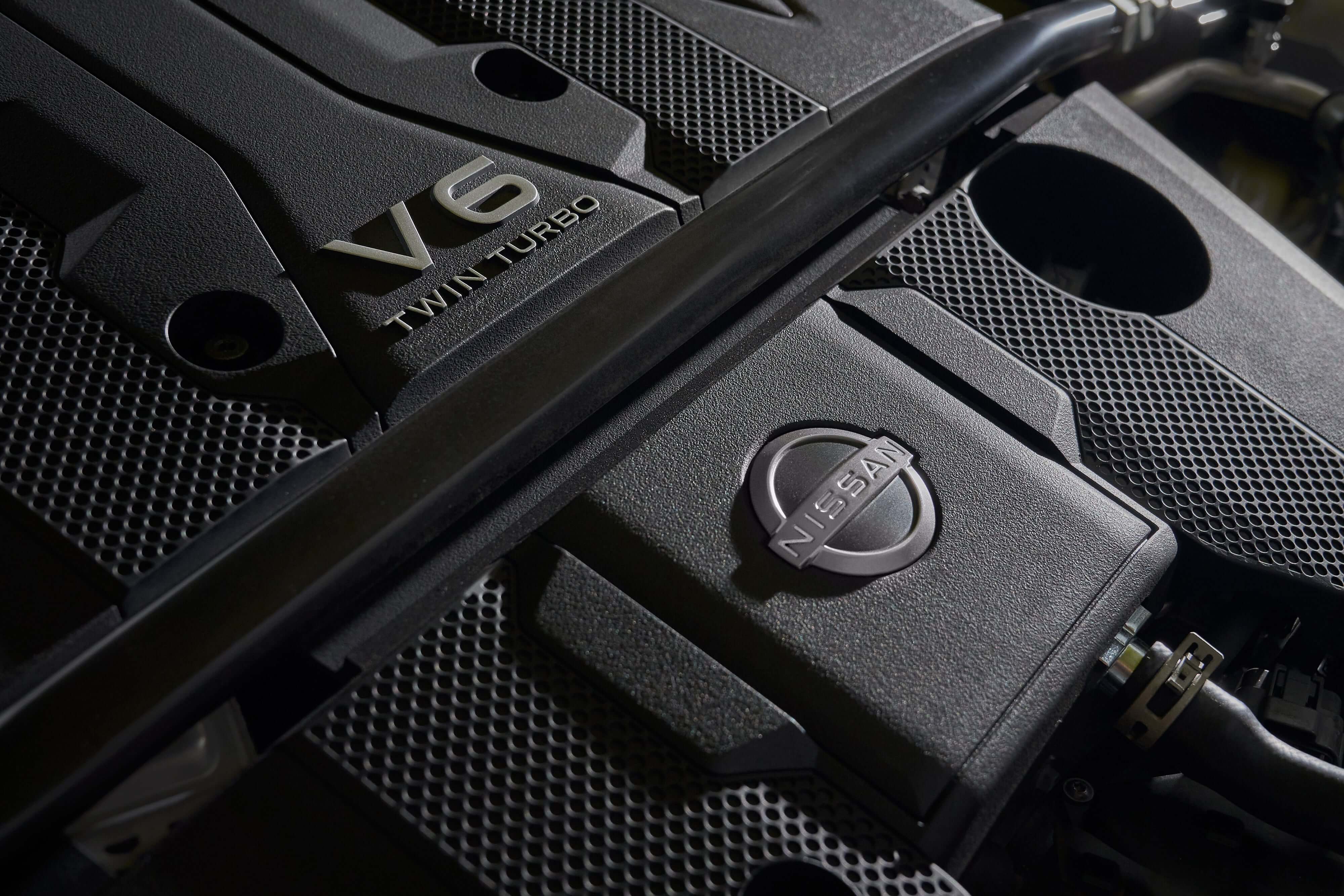 The 2023 Nissan Z is not especially fuel-efficient. The Environmental Protection Agency rates it as 18 mpg in the city and 24 mpg on the highway. For us it returned slightly worse, around 16 mpg for daily driving and dipping as low as 12 mpg for canyon.

Our manual transmission tester was a joy to row through the gears in. The transmission kicked into gear with ease, and the clutch was light on its feet. The rear-wheel drive setup provided plenty of fishtail fun, sometimes when we weren’t expecting it. 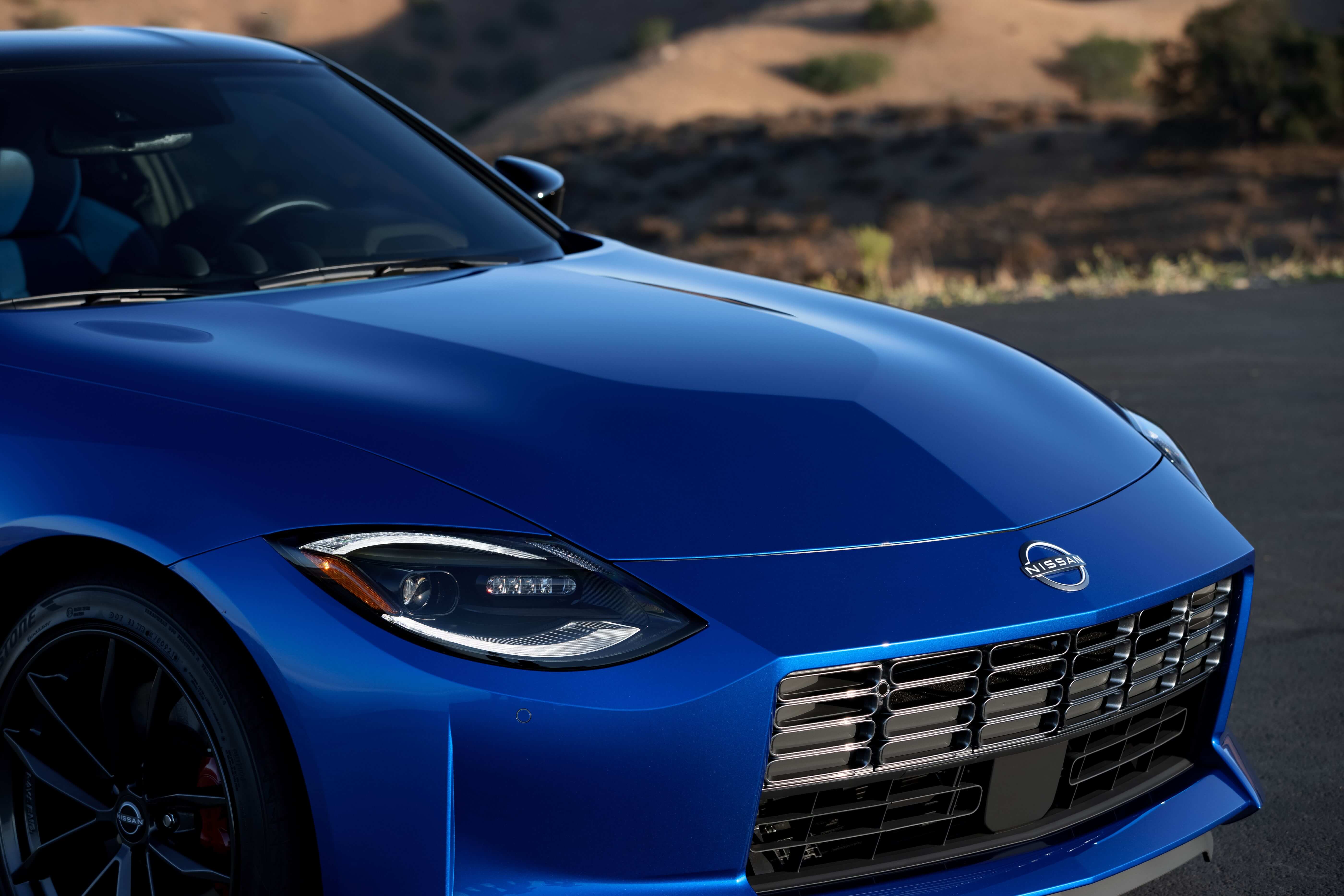 Acceleration is the Z’s calling card. Quick as lightning, it will get you into real trouble, real fast. Car and Driver clocked the vehicle’s 0-60 mph time in 4.5 seconds, but our tester felt faster than that time suggests.

Handling is pretty good, but push the Z more than seven-tenths or so and you start to feel its weaknesses. Take it as a sign the dance is getting a little out of control and you should probably turn down the music. Better tires and suspension would improve handling considerably — but you still have to deal with the weight of it all. 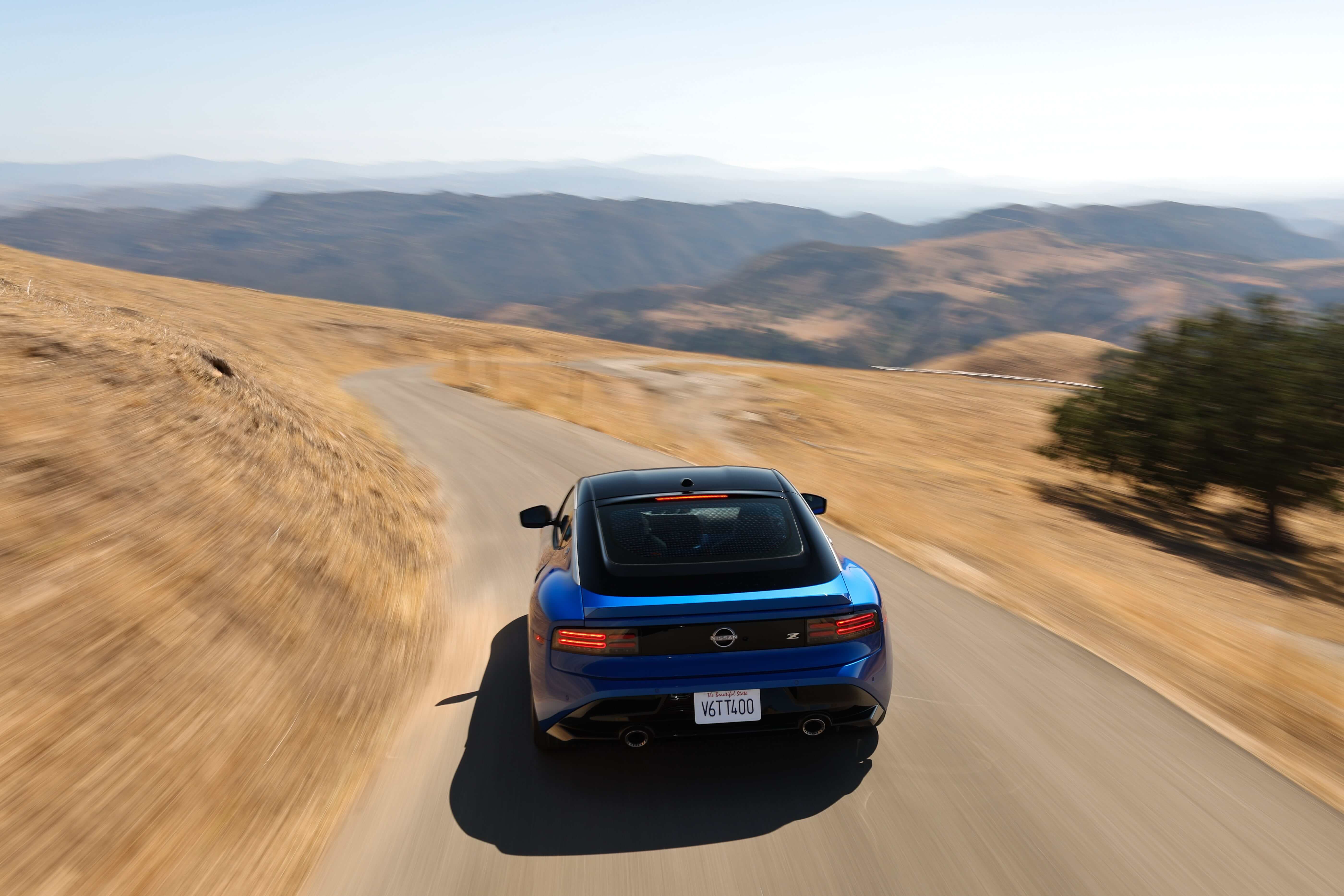 Like the Z’s handling, braking felt capable, as long as you don’t push it too hard. Interestingly, Car and Driver found that the new Z has only moderately more stopping power compared to the 370 Z — a car more than 14 years old.

Nissan did an excellent job redesigning exactly half of the Z’s interior. The rest is mostly carried over from the 370 Z. It is not better off for it — especially when you’re throwing down more than $50,000 for a sports car. However the dash, digital gauge cluster, center stack and steering wheel are all wonderful styling choices that look and feel excellent. But the rest of the interior might be a deal breaker.

I was uncomfortable for most of my week driving the Z. Nissan continues to mount the seat control buttons and levers on the sides of the bottom cushion, which cramps your thighs faster than you can microwave a toddler’s chicken nuggets. The seats look good with suede upholstery, but comfort is almost non-existent. That’s saying nothing of their shallowness — this coming from a 5-foot-9-inch man with a 30-inch inseam. Why Nissan soldiers on with this quirky design choice from the early 2000s is a painful mystery. 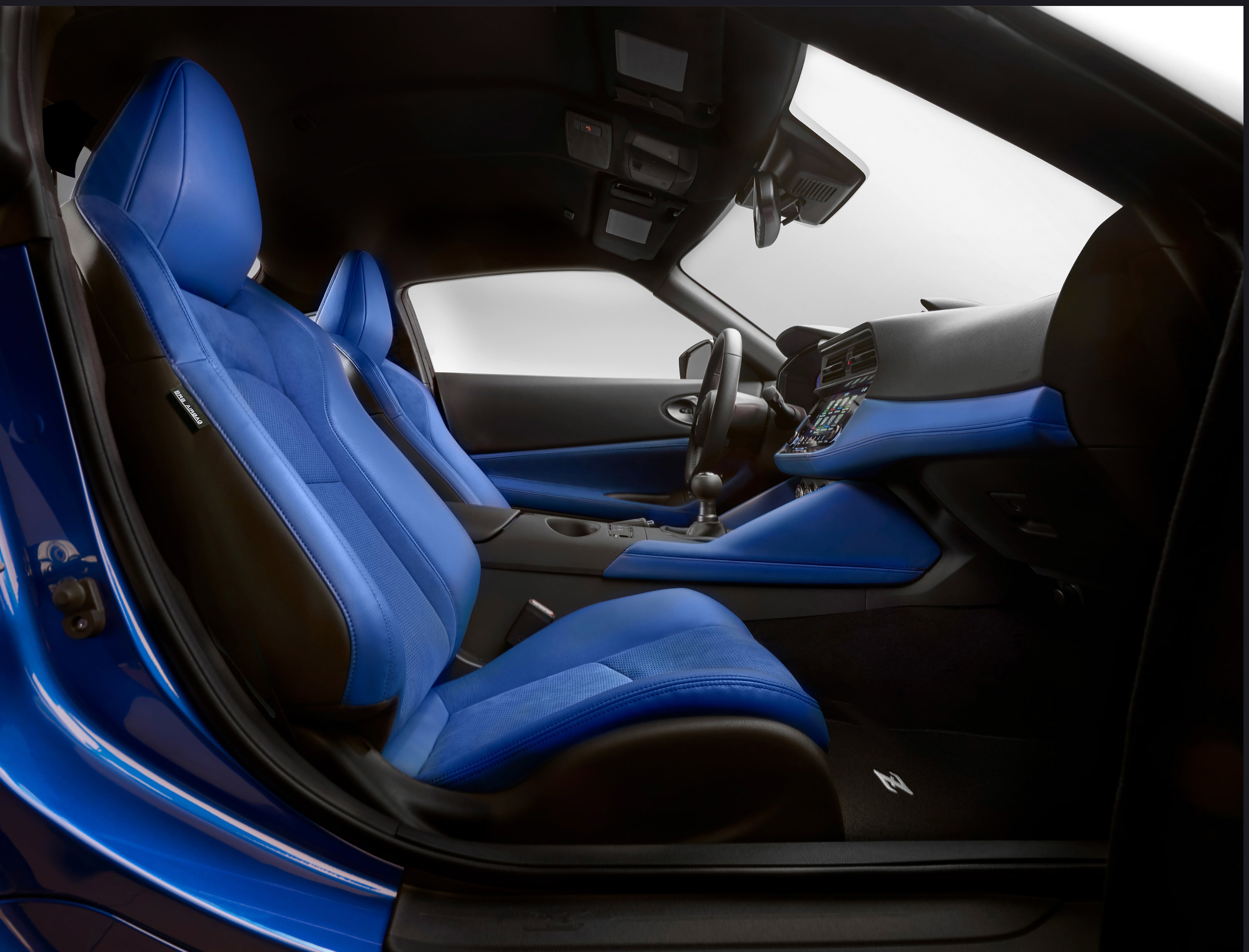 Climate control is another weak point of the Z. Its huge piece of hatch glass lets in a lot of heat and sometimes struggles to keep the interior cool. The dial, carryovers from the last Z, are tucked away under the infotainment display. The Z does have automatic temperature control, an in-cabin microfilter and dual-zone climate control.

If you were planning on carrying more than a few grocery bags in the Z, you will be disappointed. The cargo area is very small, and there aren’t many cubbies in the cabin. The center console can hold a few small items and can be slid back to reveal — wait for it — a second cupholder.

Nissan has done a great job with the new infotainment system in the Z. At 9.0 inches, the screen is large, colorful and angled nicely for ease of use. The backup camera resolution could be better, though. The Bose stereo sounds good, though you’ll want to spend most of your time listening to the engine and exhaust notes. 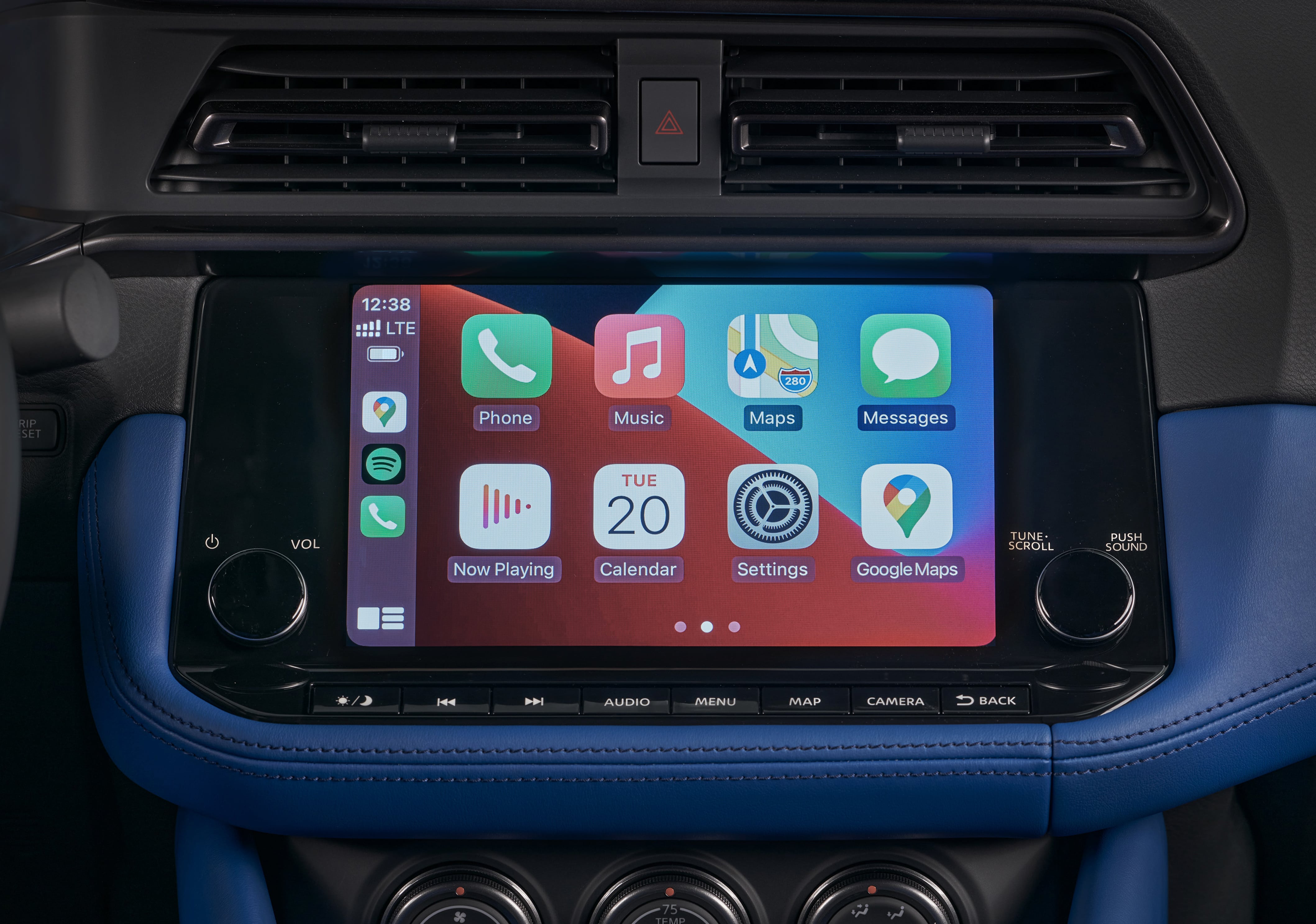 Instead of looking forward, Nissan has done the mashup of the decade with their nostalgically styled new Z. Every angle of it hearkens to a previous version, and for the most part it works — although the front grille has proven divisive. The Z is both smaller and stockier than expected. Its low, wide stance looks appropriately athletic, especially with its flared rear fenders. It comes in several eye-catching colors, including Brilliant Silver, Boulder Gray, Ikazuchi Yellow, Passion Red TriCoat and Seiran Blue — our tester’s color, which we loved.

There are two wheel options for the Z, each coming standard with the Sport and Performance trims. The Sport is equipped with 18-inch dark-painted wheels shod with Yokohama Advan tires. The Performance comes with 19-inch Rays lightweight forged wheels. They’re shod with 255/40R-19 Bridgestone Potenza tires in the front and 275/35R-19 in the rear. 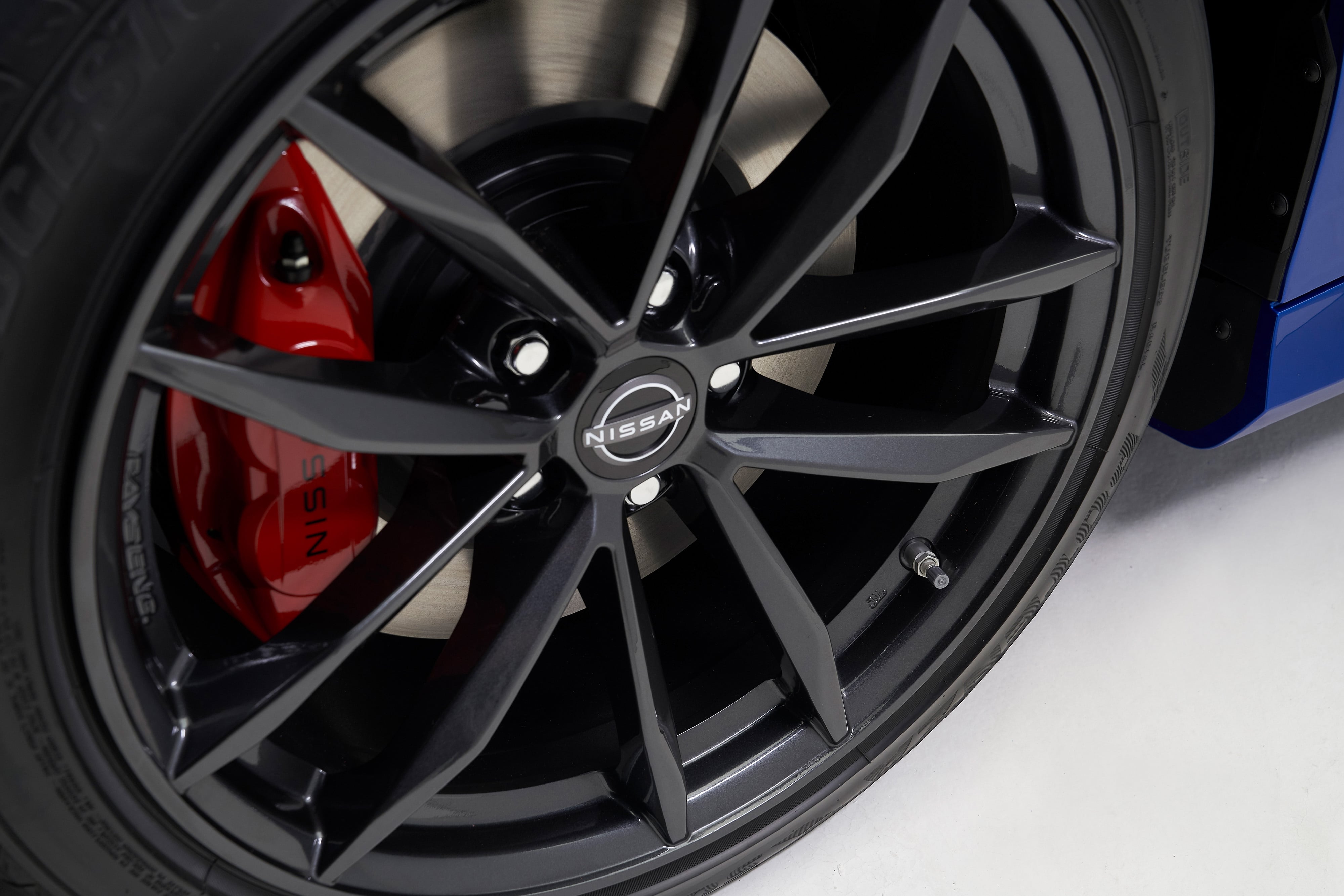 Brand new, the Potenzas provide ample grip. However, with just shy of 6,000 miles on the odometer, our tester’s tires were nearly worn out. Chalk it up to over-eager journalists, second-tier tires and weight. Regardless, spirited drivers should expect tire replacement earlier than they might anticipate. Road noise isn’t unbearable, but louder than expected.

Of all the retro-inspired styling choices on the Z, the headlights, taillights and turn signals are some of the most interesting. The LED headlights give off plenty of light and look straight out of the 1970s, while the taillights are a callback to the beloved 300ZX of the 1990s. The headlights are equipped with automatic on and off functionality.

The rearview camera in the Z does the job, but it’s blurrier than we’d like for something costing more than $50,000. The side mirrors have a nice shape and provide a clear view down the sides and to the rear. 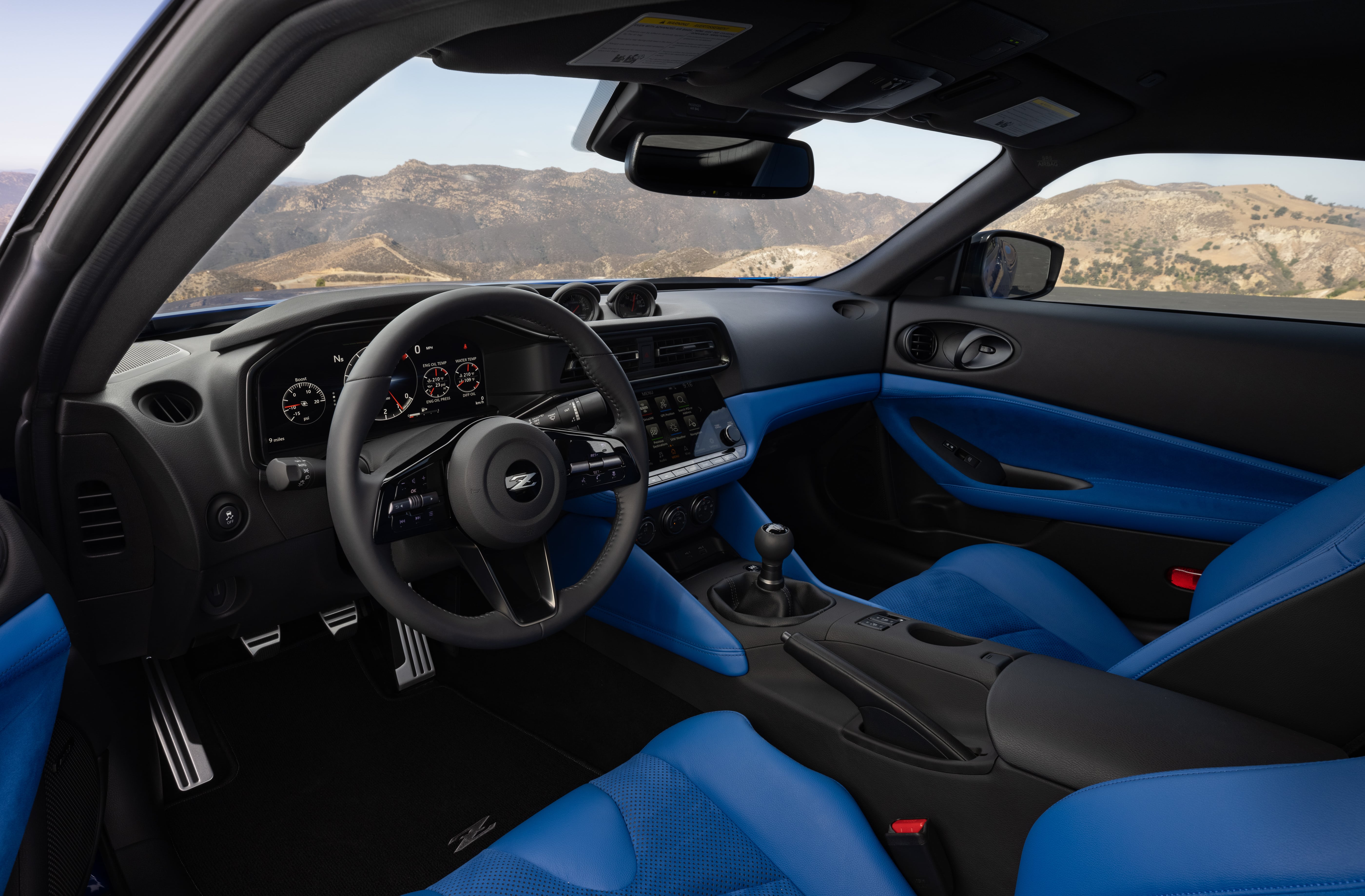 The Z has not been officially tested as of this writing, but it does come with a long list of modern safety features. Good, providing your sports car shenanigans remain within reason — and the bounds of the law.

Nissan has gone to great lengths to bring its iconic sports car into the modern world, and its safety features are evidence of that. On the Performance trim we drove, these include:

The Z has not been rated by the Insurance Institute for Highway Safety or the National Highway Traffic Safety Administration as of this writing. As for other awards, time will tell how well it stacks up against its competitors. 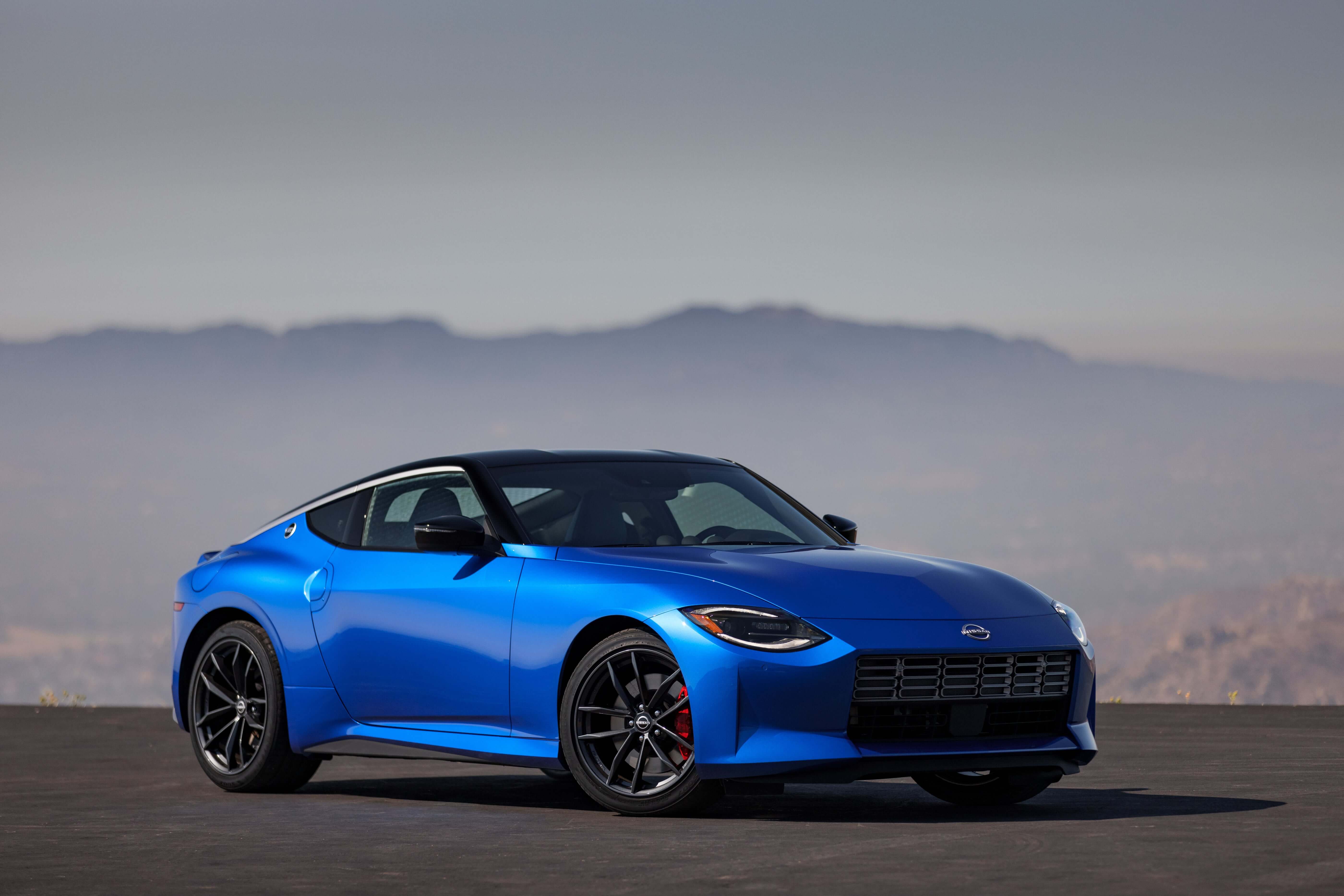 After spending a week with the 2023 Z, it’s clear Nissan has done as much as it can to make a compelling, modern sports car within the budgetary confines of the ledger. While the twin-turbo engine is certainly intoxicating, it seems as if Nissan is banking on the Z’s immense power and acceleration to mask its flaws.

The Z’s heft will certainly limit its abilities on the track, and its uncomfortable interior doesn’t lend itself to grand touring. Instead, it remains somewhere in the middle. It’s a dance partner that’s fun to hit the floor with, but also one you’re glad to drop off at the end of the night.

The Z is a riot up the canyons, and we feel that is where it’s best suited to have a good time (provided your tires are in good shape). In the meantime, we’ll wait for Nissan’s inevitable Nismo edition.

The Nissan’s true value lies in the Sport trim. If you’re after a small, two-seater sports car with 400 horsepower and manual transmission, this is a tremendous value. 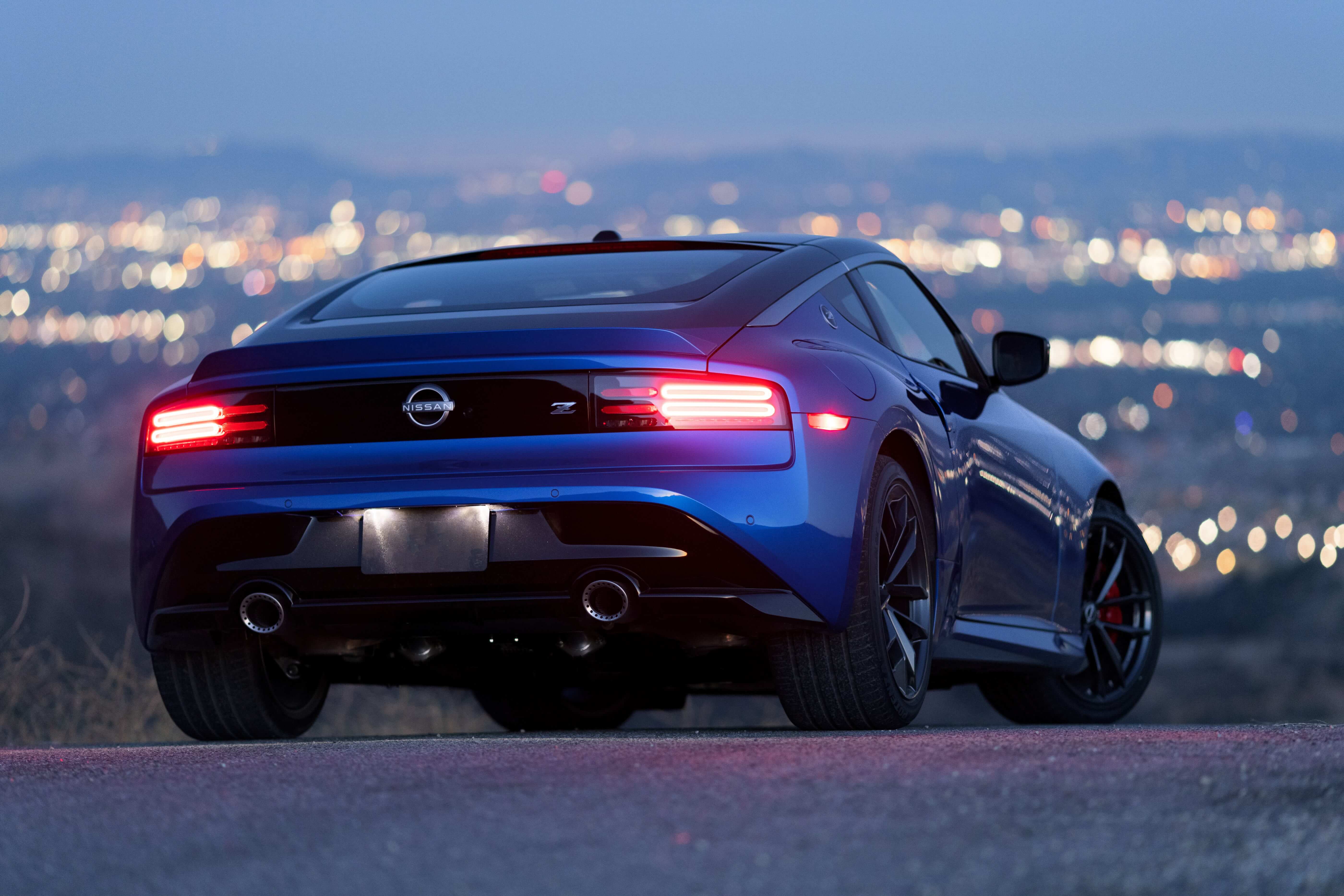 Is the Nissan Z fun to drive?

The Nissan Z is very fun to drive in the right circumstances. While we found the seats distract from the joys of the twin-turbo V6, most will find the glorious powerplant and 6-speed manual transmission a riot.

Is the Nissan Z worth the cost?

Having 400 horsepower for $40,000 is a rarity in the sports car segment. Above $50,000 and the conversation gets more complicated. We will leave it to buyers to decide which trim is the right one for them.