Another year, another awesome event by the city of Spanish Fork, Envision, and Utah County wealth management consultant, Richard Seal. Wings and Wheels: Utah’s Festival of Speed always brings out a fun crowd, and this year was no different. Several thousand people were at the Spanish Fork Airport to witness some of the state’s fastest cars and most unique planes in action. 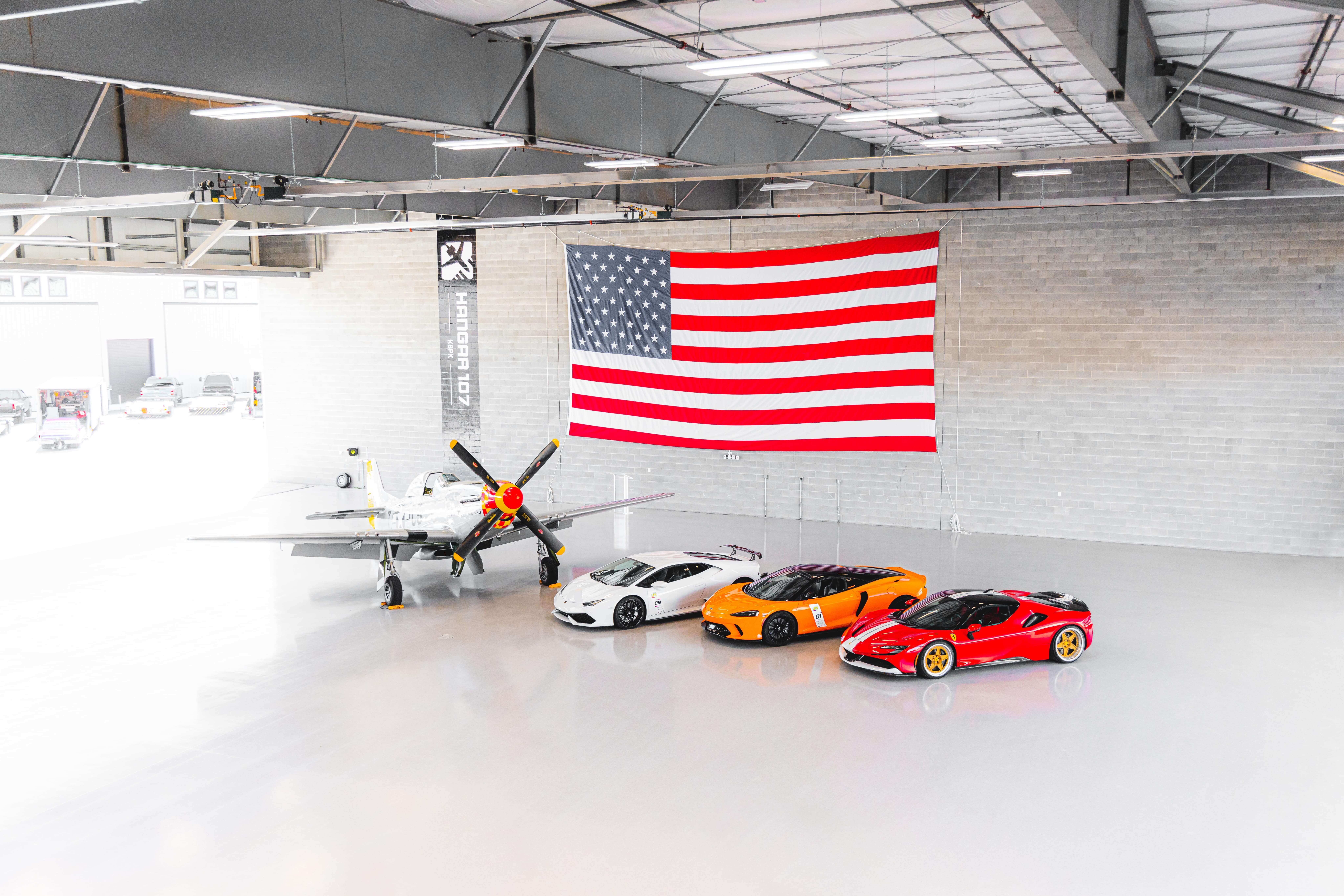 Like last year I attended with my dad, a retired air traffic controller.  He is a walking encyclopedia for anything with a motor, which made the day as educational as it was entertaining. 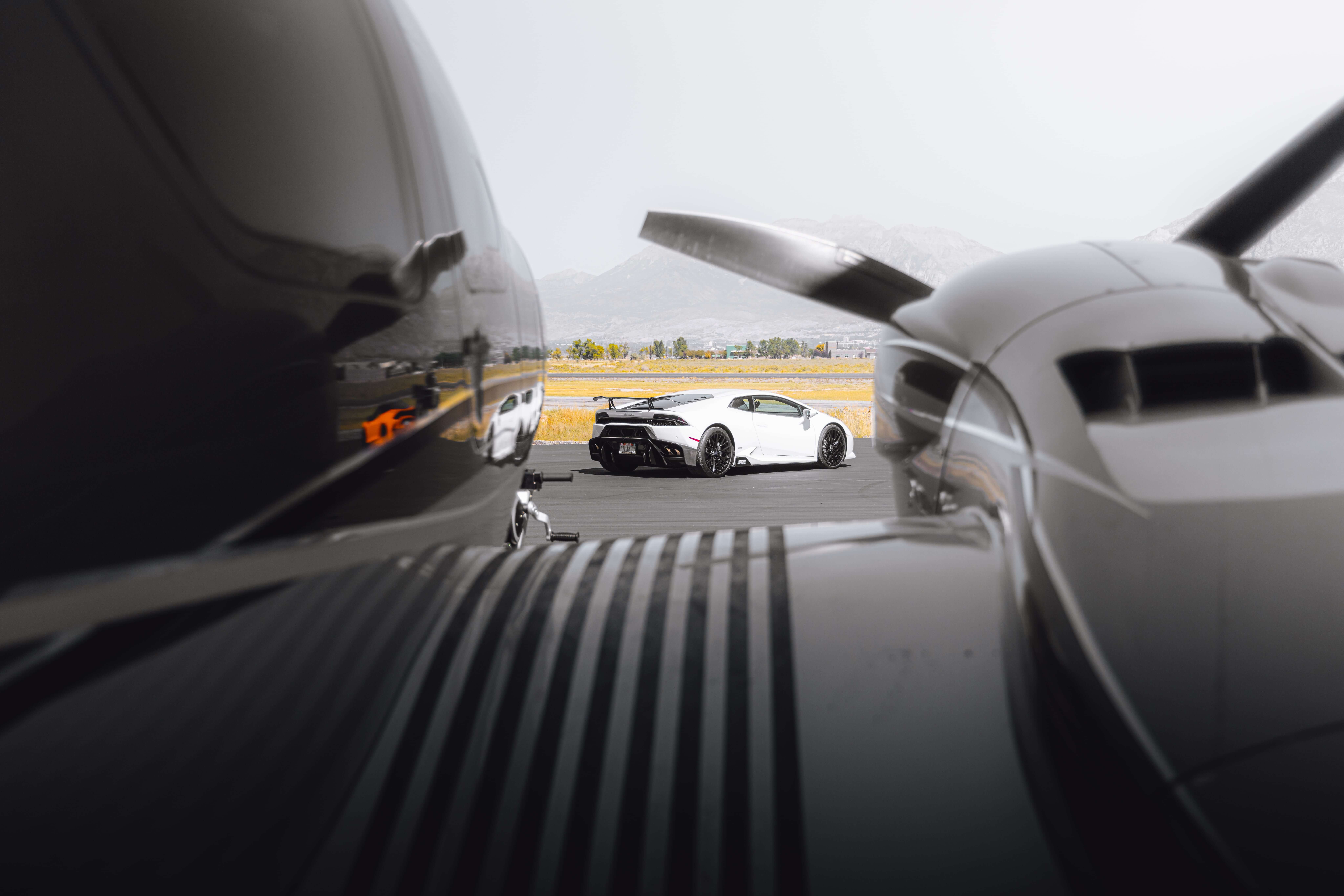 A Day of Fun

From the early morning hours of acrobatic flying to the late exotic half-mile pulls, every event was a tribute to the best machines of the land and sky.

“This event is like none other. We try hard to bring people of all interests together to enjoy some insane cars, amazing airplanes, and cool stuff they won’t see anywhere else, like Lamborghinis and McLarens racing airplanes with explosions going on behind them. It’s awesome,” said Trevor Hoyt of Envision, one of Wings and Wheels’ main organizers.

Co-organizer Richard Seal echoed Trevor’s sentiments. "Realistically, almost anybody should come to the event and have fun," said Seal. "It doesn't matter if you're a car or airplane person. What we've tried to design is a lot of communities coming together to have a great time. Autocross, cash days, racing, exotics, airplanes and the general public — everyone all together."

While all the cars, airplanes and events were incredible, here are some of our favorites from throughout the day.

There are few sights as memorable as a 1,650-horsepower Lamborghini Huracán and a bright orange McLaren GT shooting down the runway against Brad Wursten in his MX2 to, literally, explosive results. With explosions going off behind the trio, and Wursten inverted over the cars, it was a thrilling sight to see these speed demons working in concert together for the perfect photo op. 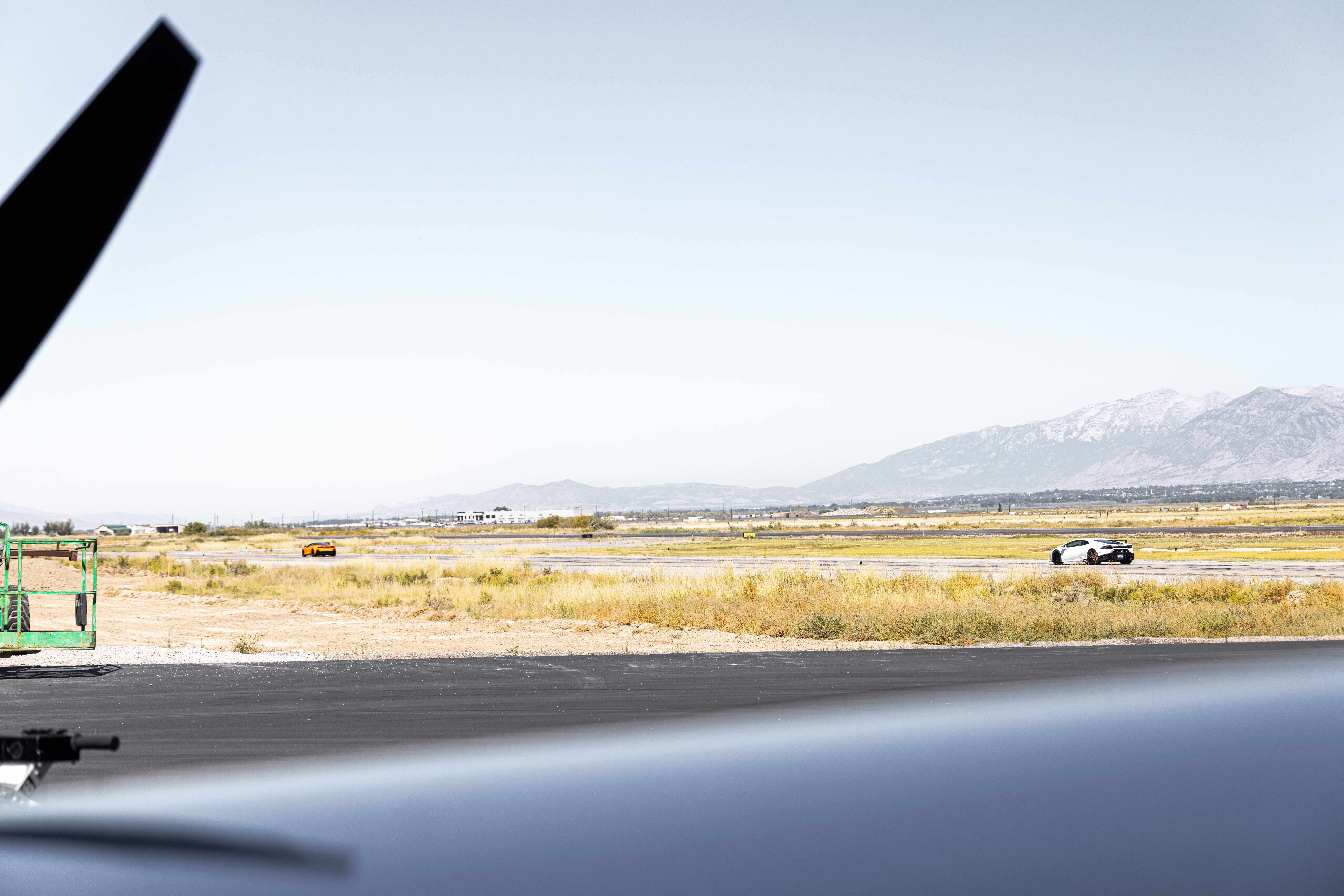 Brad Wursten’s aerial acrobatics were, as always, top-notch and very entertaining. Between him and the new Top Gun movie, I’d be surprised if there wasn't a long line of would-be pilots signed up for flight school right now. Wursten is a Logan native, so if you make it to the next Warriors Over the Wasatch Air and Space Show at Hill Air Force Base, you’re likely to see him and his death-defying stunts again.

There were vintage warplanes and WWI biplanes on display.The highlight of the day for me was seeing the P-51 “Mormon Mustang” up close and in the air. This legendary warplane, now owned by John Bagley in Rexburg, Idaho, was an inspiring and patriotic sight. The moment you hear the Rolls-Royce Merlin 12-cylinder engine fire up, you know that something special is about to take to the skies. Upon its departure from the Spanish Fork airport, the pilot graciously treated the spectators to a series of low-altitude flybys. Hearing the roar of this classic plane fly overhead was something I’ll never forget — and perhaps never see again, given how few of these war heroes are left. 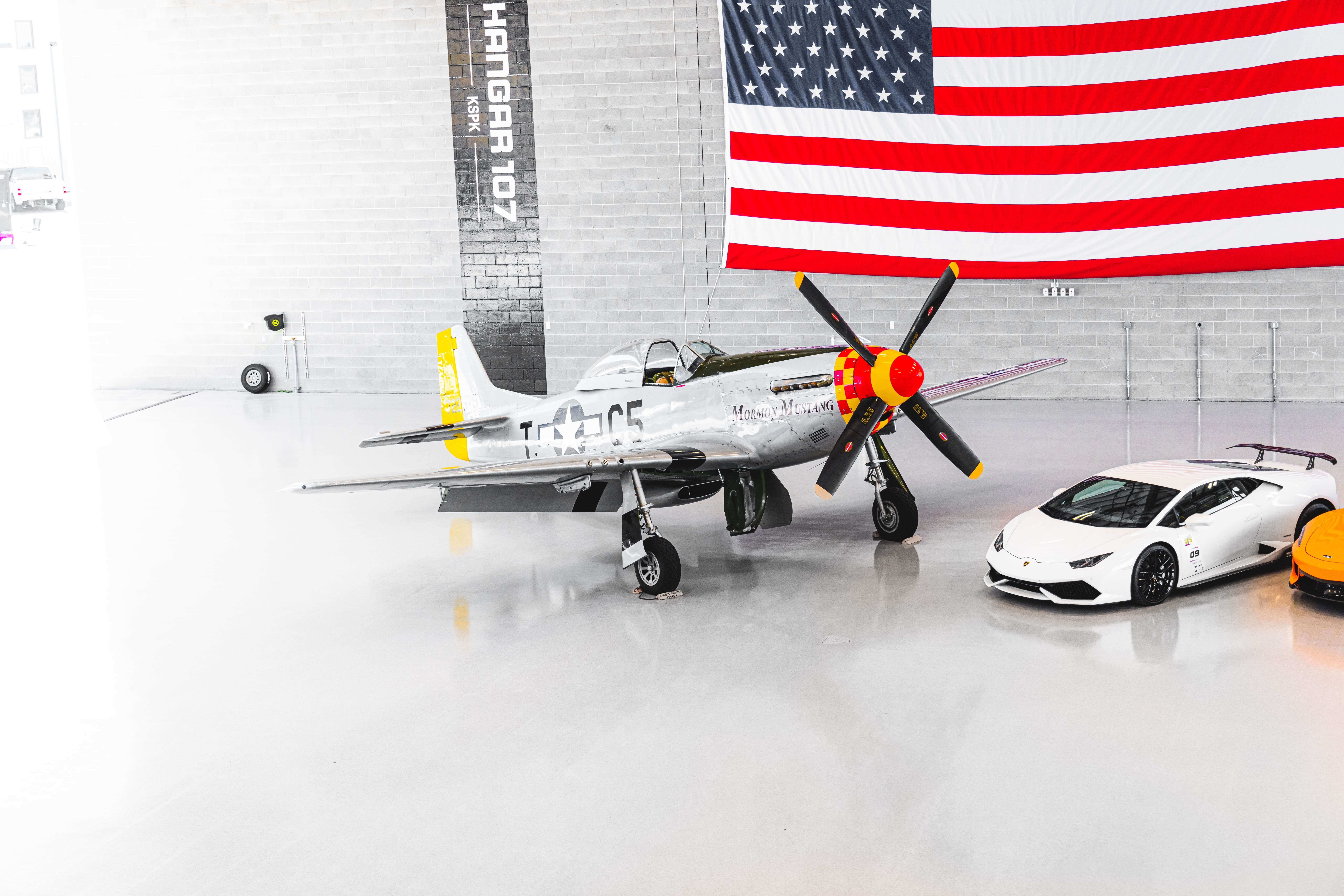 The rest of the day was full of exciting automotive events, the highlights being the cash days races and top-speed exotic pulls.

The cash days races were as thunderously exciting as ever. Watching cars that produce well over 1,000 horsepower blast down the taxiway at ludicrous speeds was a jaw-dropping affair. A favorite of mine was an old, orange Datsun 240Z stuffed with a 6.0-liter turbocharged V8. To see a car that small wield an engine nearly as large as the car itself was nothing short of spectacular.

The last event of the day was the exotic car runway attack. With a half-mile stretch of the taxiway at their disposal, it was incredible to see some of the fastest cars in the state achieve well over 170 mph or even 200 mph, including Teslas, Porsches, Lamborghinis, Audis, Camaros, Corvettes, Challengers and GT-Rs.

We have some world's best cars in Utah, and this was one of the only opportunities to see them in their element, freely stretching every ounce of their horsepower. 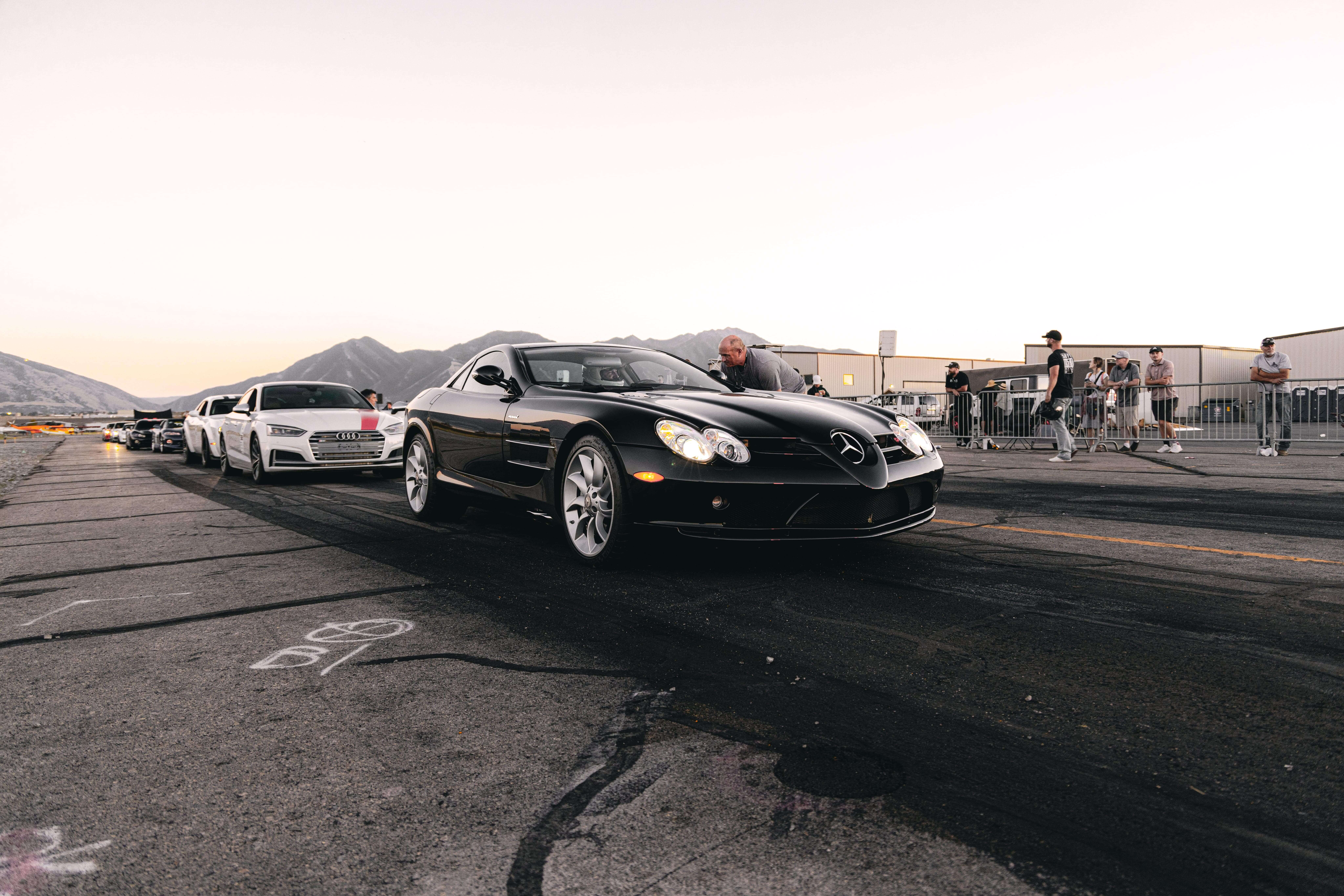 Over 50 Airplanes On Display

From vintage jets to modern airplanes and garage-built beauties — Wings and Wheels: Utah's Festival of Speed had it all. Many of their owners attended and it was great to hear their stories of how the thrill of flying has given them a hobby to enjoy for, in some instances, decades.

As cool as this year’s 10th anniversary was, we can’t wait for next year. “It’s going to be special. We can’t reveal anything yet, but next year is going to blow this year out of the water,” said Hoyt. If you missed this year’s Wings and Wheels: Utah's Festival of Speed event, you’ll be sure to want to make it out in 2023.

For more information on the event, visit the Wings and Wheels: Utah’s Festival of Speed website, here and here.